Things To Freak Out About for 2010: Draft Day Hangover

Share All sharing options for: Things To Freak Out About for 2010: Draft Day Hangover

Just when I thought we were done with the Freak Out series I go and read the college football season preview magazines and up pops another, The Draft Day Hangover.

The rise of recruiting under Coach Saban has made Alabama a football powerhouse and the NFL is primed to take advantage of the largess. And lo it came to pass last April as a banner number of Alabama players heard their name called from the podium at Radio City Music Hall.

The downside, obviously, is the team now has to replace the lost talent and experience. While the coaching staff have worked to ensure the talent is there (a whopping 11 members of this year's recruiting class were enrolled early and took part in Spring practice) experience is a bit harder to replace.

The whole idea of these posts was to examine in some detail the arguments that have been levied against the Crimson Tide going into this season and it seems everyone want to make a great deal of hay over the fact last April. Here was the final tally for the Southeast Conference.

First round picks indicated in parenthesis

Now according to the folks paid much more than us to discuss these matters, losing a boatload of players to the NFL Draft is a sure warning sign a team is due for regression in the next season. And, sure enough, a quick glance at Phil Steeles "Draft Day Party Hangover" list shows Florida, Alabama and Tennessee as prime candidates for this kind of step backward.

Essentially it's the same issue we've seen pop up in questions about the defense due to the fact there is only two projected starters returning in 2010. But since we want to ensure everyone has the right responses when grilled by opposing fans at the bar, we decided to look the numbers involving SEC teams a little more closely... 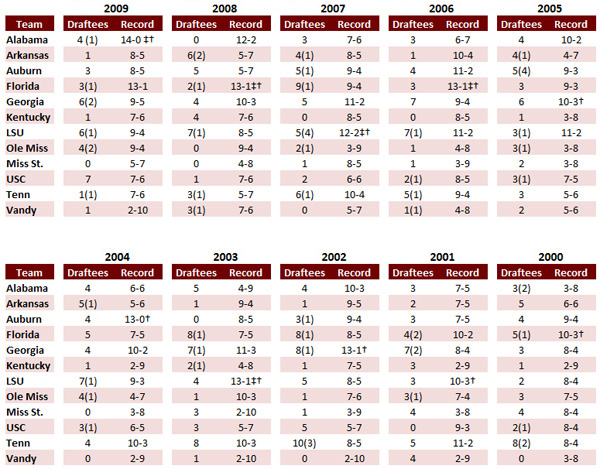 Just looking at the past decade in the SEC, it would seem losing more than six players to the NFL draft seems makes it almost certain a team will suffer a sub double-digit win season. In fact, the more likely result is a eight or nine-win campaign.

The big example that jumps out is Florida 2007. The Gators lost nine players to the draft including one first rounder in the wake of their national championship. A disappointing 9-4 season ensued but Urban Meyer and company used that to lauch the 2008 version that attained the crystal football once again. If there is a comparison to the 2010 Crimson Tide in the mind of the pundits, this is most likely it.

Steele contends that 70% of the teams that "rank among the top  of the NCAA in players drafted" have weaker records. As you might expect, he's got an arcane system to back up his assessment but I figured I'd just give a look at the SEC teams since I had the data on my spreadsheet.

Sure enough, when you look at the SEC teams who lost three or more players to the draft there seems to be a rough correlation between how many hit the road and a team's chances of a weaker season afterward.

And the number of teams losing players in the first round isn't cause for optimism either. Of the 37 SEC teams who saw players selected in the first round, more than half (51%) suffered a weaker record the subsequent season.

So losing seven or so players to the draft is reason
to expect the worst, right Georgia?

Still, given that the Crimson Tide went undefeated on the march to the BCS National Championship it seems a little disingenuous to suggest they won't improve next year. And there's plenty reason to believe that a solid team with good recruiting can weather the adversity. Take Georgia, for example.

During the first half of the decade, Georgia had a habit of losing players to the draft and coming back strong during the next season. In Mark Richt's second season, 2002, the Bulldogs saw a whopping eight players go to the NFL in the Spring. That didn't stop them from racking up  a 13-1 record in the following season as well as the SEC Championship.

And it wasn't a complete fluke. The 2003 draft plucked seven players from the Bulldogs roster and they still pulled out an 11-win season the next Fall. By Steele's metric that goes into the "weaker season" category but it shows the inherent flaw to this assessment: teams operating at this level only have down as an option. Which is why Coach Saban is so obsessive about nipping the whole "repeat" talk about the 2010 Crimson Tide in the bud.

So does the Draft Day Hangover warrant full on Freak Out status? That depends on how much of an excuse you need to start drinking before noon on any given day of the week. But we advise focusing your concerns on the specific issues with the defense that took the largest hit by departing players.