Mark Ingram could very well topple two long standing career rushing records in 2010: rushing yardage and rushing touchdowns, both currently held by the phenomenal Shaun Alexander. Needless to say, Ingram played out of his mind on his way to picking up the Heisman Trophy and helping the team win a national title last year and expecting to him to repeat that kind of dream season is a bit unrealistic to say the least. That being said, Ingram really only needs a solid season in order to break these career rushing records. We'll keep track of his stats throughout the course of the 2010 season and will update his progress toward these marks (no pun intended) after every game.

Ingram set the single season rushing record last year with 1,658 yards, eclipsing Bobby Humphrey's 23 year old feat of 1,471 yards in 1986. 2009 also saw Ingram turn in the third best single game rushing display by rolling up 246 yards against South Carolina in a game that saw him emerge as a legitimate Heisman candidate. That game only trails Shaun Alexander's 291 yard display against LSU in 1996 (how awesome would that have been if he'd rushed for 300 against LSU?) and Bobby Humphrey's 284 yard performance against Mississippi State in 1986.

Ingram needs 1,180 yards to break Shaun Alexander's record. We'll assume Alabama is good enough this year to make a bowl game and with 13 games on the schedule, Ingram would need an average of 90.7 yards per game to become Alabama's all-time rushing leader. There were only three games last year he didn't meet that number: Florida International, Arkansas and Auburn. If Alabama makes it to the SEC Championship Game against this year, Ingram will need 84.2 yards per game to become the Tide's all-time leader. While it certainly won't be a cakewalk, you've got to like the chances of a returning Heisman winner being able to produce those numbers considering he averaged 118 yards per game last year despite splitting time with true freshman phenom Trent Richardson. Ingram isn't currently in the Top 5 all-time rushers, but he's close to cracking the Top 5 with 2,386 yards in his first two seasons. The current Top 5 looks like this:

Since everyone loves pie charts, here's Ingram's progress in eye-catching graphic form (click on it for larger version): 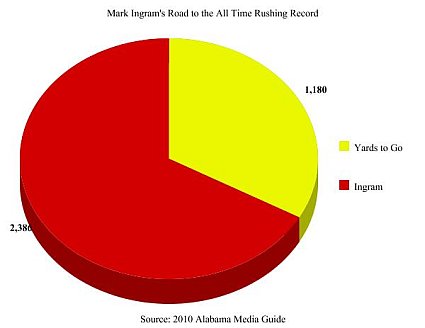 In addition to likely breaking the all time rushing yardage record, Ingram is threatening to best Alexander's rushing touchdown record of 41. Ingram currently sits at fourth on the all time list with 29. In addition to Alexander, Ingram also trails Johnny Musso (34) and Bobby Humphrey (33.) You've got to think he'll eclipse Humphrey and Musso pretty easily. Once again, assuming Alabama makes a bowl game, Ingram will need a TD per game to eclipse Alexander's mark. Here's how things currently stand on the TD record: 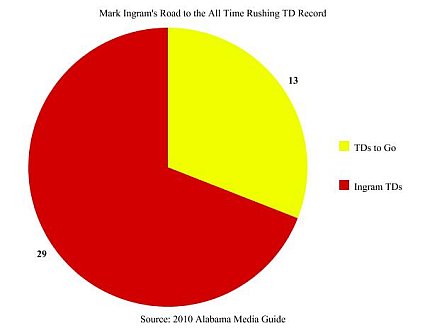 Several other players are likely to crack the Top 5 in some career categories. Julio Jones is likely to make it into the Top 5 in career receptions and even with a season like his sophomore campaign could become the 2nd or 3rd all time in receiving yardage. He has an outside shot at cracking the Top 5 in TD receptions if we can get him a few more this year than he's been averaging. If Greg McElroy has a 2010 like his 2009, he should come in at #5 on the all-time passing yardage record behind Jay Barker, Andrew Zow, Brodie Croyle and John Parker Wilson. Ingram is currently fourth on the all time total touchdown list with 32. He's currently behind Johnny Musso (38), Bobby Humphrey (40) and Shaun Alexander (50). Ingram would need 19 total TDs this year to become all time leader in that category as well. We'll keep an eye on that one, but will hold off on those charts for a while.

One thing this really shows is what an incredible collection of talent Nick Saban has assembled here in Tuscaloosa. You've got Ingram likely to surpass two all time rushing records and with a decent shot at breaking the all-time total TD record as well and two other guys in McElroy and Jones looking to crack the Top 5 in several categories as well. I know individual records are very low on the list of priorities of Alabama fans and I'm very much in that camp as well. That being said, I think looking at the stellar cast we have on offense and their likelihood of breaking records or becoming one of the all time leaders really speaks volumes for what this team can achieve and that it should be no surprise these guys stand to have impressive individual achievements on their way to great team feats. Practice starts next week and then we're only about five weeks out from the San Jose State game. I'm very much looking forward to seeing what these guys bring to the team this year as well as what they can accomplish as individuals.