On Jan. 7 the Alabama Crimson Tide football team defeated the University of Texas Longhorns in the historic Rose Bowl Stadium and claimed the school's 13th National Championship. And almost immediately the shopworn complaints about the Tide's claim to that number of titles were dusted off and readied for use.

Within weeks an unsigned e-mail began circulating "debunking" the Crimson Tide's claim to the twelve titles earned by the program prior to the 2009 season. Author Alan Barra subsequently issued a devastating response to this anonymous missive in the Birmingham Weekly outlining its surfeit of errors, misrepresentations and outright falsehoods.

But addressing one sloppy attempt to malign the championship tradition at the Capstone is just a drop in the bucket. Cheap shots about the number of titles claimed by the university are a staple amongst our foes. Which is always amusing since these attacks tend to wither away almost completely under any type of reasonable analysis.

So as a public service to the Crimson Tide faithful, we here at Roll Bama Roll have come up with a handy entry containing all the information on the 13 teams recognized by the University of Alabama as National Champions.

This is not a defense of the teams recognized as champions. For that I urge you to dig up the 2009 issue of Yea Alabama where our own Pete Holiday provides up a 4,000-word exegesis on the subject. His verdict: The university might be over-counting, but not by much.

To kick things off, here is the list of all 13 of Alabama's National Championship teams:

In addition to these 13, the university also notes there are five other Crimson Tide squads that have a legitimate argument for inclusion as national champions but are not formally recognized for that achievement.

It seems pretty clear that the university has plausible grounds for the teams it includes in its list of national champions, so why all the fuss?

Given the complexity of the task at hand such controversy is pretty much the nature of the beast. As Pete explained in his Yea Alabama article:

The biggest problem is that we have a field of around 120 football teams who play 12-14 games a season with minimal overlap. Choosing the "best" or "most deserving" team is always going to be a guessing game.

In lieu of the association's imprimatur on a title there's no agreed-upon method for designating college football's national champion over the whole history of the sport. The result, Pete points out, is that college football National Championships are largely self-proclaimed by the universities and "the number depends almost entirely on how you define a championship."

That brings us to even greater confusion as the methods of defining college football's champions has seen a heck of a lot of change over the past century.The vicissitude has done very little to quell disputes over which teams rightfully deserve the title. 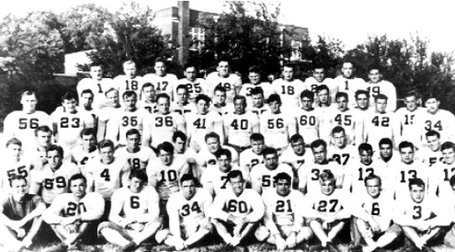 Things got started during the 1920s with a "rush" for determining national champions using mathematical systems. The first, and probably most famous, of these was devised by University of Illinois economics professor Frank G. Dickinson.

The Dickinson System anointed national champions from 1926 to 1940 but it was hardly alone. Within a few years it was joined by the Alderson System, the Houlgate System, the Williamson System and a host of others with varying degrees of longevity and credibility.

Adding to the confusion is that many of these systems then awarded retroactive national championships -- further obfuscating the debate over which program rightfully could claim the title in a given year. That led to the emergence of research selectors designed primarily to address questions of past (or retroactive) championships.

College football historian Parke H. Davis established the first serious effort in the 1933 edition of Spalding's Football Guide. They have become a staple of the discussion as efforts to deduce "retroactive champions" for each season in the history of the sport has gained momentum.

In the mid-1930s, the polls got started as a means for newspapers to collate assessments of various teams. Although it took them a few decades to gain prominence, when they did they became the established means of selection a national champion for college football. And while we tend to think of just a handful national polls there actually have been quite a few over the years, many of which still exist and do their selections in the shadow of the current BCS format.

It should also be noted that at the onset both the systems and polls were biased against the south. This was only partially due to the oft-invoked perception that teams from the region were inferior to those in the north, midwest and Pacific Coast. The more practical fact was the selectors were driven by newspapers and other publications that were geographically located significantly far away from the locales where southern teams played.

This situation slowly improved during the middle of the century and the time the 1960s rolled around, college football underwent a series of dramatic changes along with the nation as a whole. In previous eras, the relative isolation of each conference and the scarcity of post-season bowl games rendered determining a champion at the national level pretty much academic. That situation altered faster than anyone expected due to a convergence of factors.

The first was travel. Between the completion of the interstate highway system and the access to air transport, suddenly teams (and fans) could afford away games as part of the regular season rather than just for a bowl game over the Christmas holiday. The second was television which transformed the sport from one appreciated by direct attendance to one that was enjoyed by fans in the comfort of their living rooms nationwide. 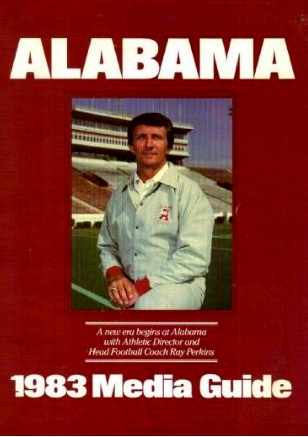 The book that started the debate.

As the profile of the sport rose to the national level, the natural inclination to honor an overall champion grew as well. Thus we see the emergence of "consensus national champions" and, in years opinions were divided, the hottest debates over which teams rightfully deserve the title. This is the era of Alabama's "consensus" national titles.

This chaotic mess was pretty much the accepted status quo for the next two decades. The fact that Alabama chose to acknowledge the National Championships under Coach Paul W. Bryant was not much fodder for debate (the issue surrounding the 1966 title denied the Crimson Tide was much more of a point of disagreement).

That all changed in 1983 when the university's sports information director Wayne Atcheson added the five titles prior to Coach Bryant's tenure in that year's media guide. Today, he admits his selection wasn't exactly the most scientific but they have come to be accepted as canonical by Alabama fans.

To an extent, the arrival of the Bowl Championship System in 1998 has silenced the yearly debate about the national champion (the controversy now rages about inclusion). From a historical standpoint the BCS is an interesting return to the first era of championship selectors -- a system method of selection the title team that integrates the poll approach.

Yet the questions about the historical champions remains unresolved and the protests by our foes has continued unabated. Our feeling today is that if you want to disagree with our claim to 13 National Championships is perfectly fine. We welcome the debate.

But as soon a you do, you best be prepared to lay out a reasonable standard to use instead -- and we're highly confident Crimson Tide will emerge on top by that measure as well.

Note: This is by no means a complete list of the groups, systems and polls that have been created to select a national champion for college football. Rather, it includes those selectors used by the University of Alabama for establishing the validity of the Crimson Tide teams that are recognized as National Champions.