RBR Reading Room: 100 Things Crimson Tide Fans Should Know & Do Before They Die

Share All sharing options for: RBR Reading Room: 100 Things Crimson Tide Fans Should Know & Do Before They Die 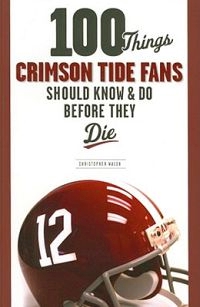 List making is the lifeblood of internet websites that have to subsist on daily page views. Pick a subject and jot down five to ten examples and post that baby. People will read it. They are compelled.

So penning a fan book about Alabama football using that concept seems all too obvious in retrospect. So when Triumph Books rolled out  "100 Things Crimson Tide Fans Should Know & Do Before They Die" last year as part of a series targeting major sports teams it wasn't all that surprising.

When these tomes first appeared, the response was predictable. Foes of various teams jumped at the opportunity to use the concept to belittle their rivals. One of the best efforts was Dawg Sports "Ten Things Auburn Fans Should Do Before They Die."

The reflex to respond with snark shouldn't be overly surprising since one of the first pioneers of this type of book was none other than Paul Finebaum whose "I Hate..." series was a minor fad in the 1990s (popular enough to even inspire a parody).

So I picked up "100 Things" with low expectations and little to lose but damned if it didn't surprise me -- and in an extremely positive way.

The book is written by Christopher Walsh the former Tuscaloosa News reporter who now writes for Bama Online, the Rivals.com site covering the Alabama Crimson Tide. Walsh brings both his experience covering the program and his acumen as a former newspaper journalist to bear with this effort and the result is quite satisfying.

Just imagine Keith Jackson is narrating
and this is the best book ever.

Like its literary brethren "Crimson Tide Madness" this book is a collection of facts, anecdotes and erratta compiled into a rough list. Yet "100 Things..." presents each entry as a concise but complete tale. Instead of just name checking each item on it's list, the book gives them context and clarity.

So while the book tallies the necessary pilgrimages and depository acts of homage expected of Alabama fans it also provides the background on the history of the program as well. "100 Things..." is not just a "bucket list" if that's what you are expecting. The key players are here and the legendary coaches as well (item number one is, of course, Paul W. Bryant).

It then makes a thorough effort to touch on all the highlights (the first game, Teague's return, Saban's arrival)  and low points (the Means debacle, Prothro's injury, Punt Bama Punt) of the football program. He also hits some oft overlooked items such as the tale of Riley Smith, the first player drafted into the NFL.

Make no mistake, this isn't high literature (or investigative journalism) but many of these entries turn out to be excellent shorthand tellings of key points in Crimson Tide football history.

Given the wealth of information made available in this book, my biggest criticism is that it lacks an index. With it, "100 Things..." would actually be a quite handy reference volume. Of course, given the sheer breadth of it's concept, depth is an issue as well. But there are plenty other sources to turn to for that (speaking of, Walsh's source list is a nice trove of good info as well.)

Like a lot of Alabama football books published in the past several years, the sheer scale of achievements by the team under the leadership of Coach Saban has made "100 Things..." quaintly anachronistic. The final recommended thing to do is "See Alabama Win A National Championship." Consider it done, sir.