The Process by the Numbers: Part I - Down By Law

Share All sharing options for: The Process by the Numbers: Part I - Down By Law

Two years ago, Chris Brown of Smart Football penned a superb piece examining Coach Saban's approach to defensive secondary (which he reposted in the 2009 off season as well). It was prefaced with an excerpt from The 2001 LSU Defensive Playbook that summed up the core of the man's approach to defense: "[Our] philosophy on first and second down is to stop the run and play good zone pass defense."

In this respect, the man hasn't changed much over the past decade. Stopping the run and daring opposing offenses to throw into the welcoming clutches of his defensive backfield remains a hallmark of his defensive approach. But that's not particularly surprising. Coach Saban has repeatedly admitted his love for coaching defensive secondary and his strategy accents his affection for that phase of the game.

Brown argues that the paramount virtue of a good offense is balance between the rushing and passing attacks. Coach Saban's defensive approach seems to be aligned with this in that it is designed to disrupt an opposing team's ability to maintain that balance when they have possession of the football.

Now as fascinating as I find all this analysis -- and be assured, I find it quite fascinating indeed -- understanding the inner workings of it is not my strong suit. There is absolutely nothing I could add to the excellent work done by both Brown and Brophy over at Cripes! Get Back to Fundamentals... on this subject. What I'm interested in with this article is seeing if the numbers reveal anything about the success of Alabama in implementing this system.

So I cranked up an Excel Spreadsheet and headed over to the venerable CFB Stats website to see what I could see and, hopefully, learn a bit more about how Coach Saban's defensive approach works. And, goodness gracious, it turns out there was quite a bit to behold.

For the next three days, I'll have posts explaining some of what I was able to dig up. For today, there's lots of charts and statistical goodness just waiting for you after the jump.

The first bit of information has to do with the increased tendency of opposing teams to pass on the Alabama defense. At Todd's suggestion I took a look at the percentage of times teams passed as opposed to running over the past four years broken down by down (Tables 1, 2 and 3). 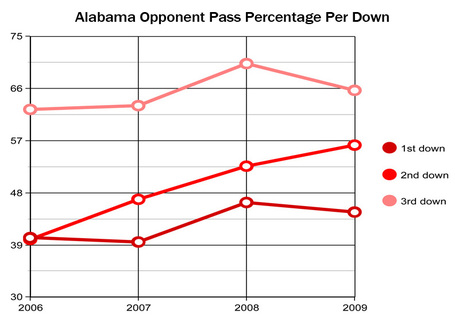 Between 2007 and last year, opposing teams took the the air 13% more against the Crimson Tide defense on first down and better than 20% more on second down. Passes on third down stayed in the two-thirds range but are still noticeably increased from Coach Saban's first year (we'll get back to this later).

As grinding out drives on the ground becomes less of an option against the Tide defense, it paves the way for Coach Saban's famed and feared nickle packages and blitz sets. The result is first downs are much fewer and quite a bit farther between for Alabama's foes (Table 4). 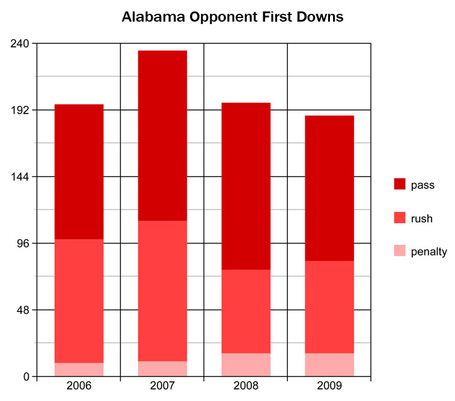 In Coach Saban's first season opposing offenses rolled up a banner number of first downs against the Crimson Tide and they relied on the rush to an inordinate extent. In 2007, opposing offenses racked up 235 first downs against Alabama, doing so on the ground almost 43 percent of the time. Last season that percentage tumbled to just more than a third while the total number of first downs recorded against the Tide defense had fallen a whopping 20 percent.

Of course, stopping first downs is only helpful in as much as it's keeping opposing offenses stymied and out of the end zone. So, to examine this, the first question is how much has Alabama translated these trends into overall defensive efficiency? Quite well, thank you very much (Table 5). 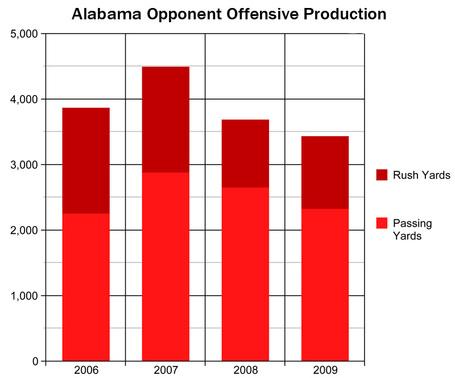 Obviously the overall numbers are down which is what we want to see. And the productivity of opposing passing attacks has been hit as well. We've seen a 10% decrease in the percentage of yards opposing offenses have gained in the air between 2006 and 2009  (although that figure spiked in 2008). Looked at per game, this trend is even more pronounced. 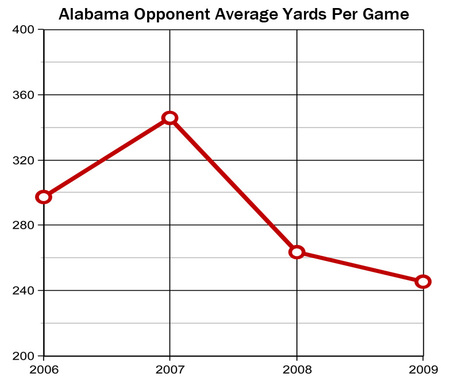 But the games are decided by what's on the scoreboard at the end of 60 minutes. All of this effort isn't really worth much if opposing teams are still putting points on the board. Happily, the strategy seems to be having the desired effect as well (Table 5). 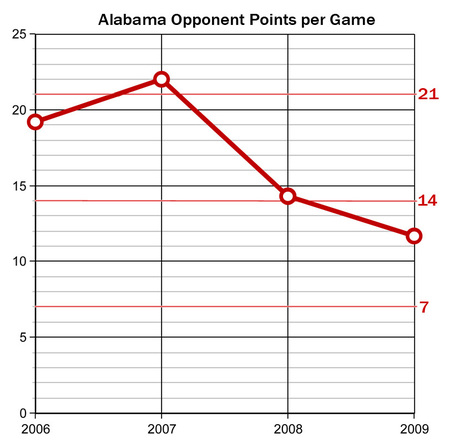 In 2007, opposing teams were averaging better than three touchdowns per game on Alabama. In 2009, the Crimson Tide had slashed that figure by almost 47%. So it seems there's actually something to this whole defensive approach.