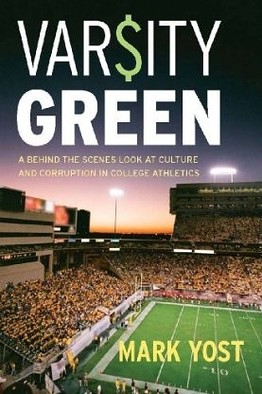 Mark Yost's Varsity Green: A Behind the Scenes Look at Culture and Corruption in College Athletics will be a somewhat frustrating read for many college sports fans and they will find themselves screaming "Amen!" one moment and then shaking their fists in the air the next. On one hand, Yost absolutely eviscerates the NCAA as a powerful monopoly with a vague 400+ page rulebook open to wildly different interpretations and applications that can be unilaterally imposed (something we know about all too well.) On the other hand, he's guilty at times of throwing the baby out  with the bathwater in shaking down the entire collegiate athletics system as corrupt and almost beyond hope of redemption (that is if you believe it needs redemption in the first place.) Yost covers a lot of ground in 200 pages: the origins of intercollegiate athletics, corporate sponsorship, broadcasting rights, academics, recruiting, the facilities arms race, apparel deals/endorsements as well as alumni and booster donations, etc.

Yost derides the idea that there ever was a "golden age" regarding college sports. He points back to the first known intercollegiate athletic competition in the U.S., a rowing event between Yale and Harvard in 1852 that was staged neither in Massachusetts nor Connecticut, but in New Hampshire. The event was the brainchild of a railroad man and designed to bring more attention to and passengers on the railroad. The athletes and staff were given free fares and the spectators expected to pay. While one can't take an event from 150 years ago and use it as evidence of the system being forever corrupt and/or profit driven, it certainly shows that collegiate athletics were a vehicle for making money right out of the gates in this country both for private enterprises as well as the universities. Other instances are cited of schools using professionals and players from other universities in contests. While this sort of cheating certainly couldn't go on today, it shows that there's no shortage of precedent of academics and ethics being shelved in the name of winning.

While I agree with him that there likely was never an era of squeaky clean college sports, I don't think it's an evil empire either. In the closing chapters, Yost goes so far as to brand the NCAA a "cartel" that seeks to do nothing but exploit others for its own profit. I'm certainly not a huge fan of the Indianapolis based organization, but I think calling them a "cartel" or "mafia" is just a wee bit unfair and that's where the book really lost me. Yost heavily concentrates on football and men's basketball, the "money sports." Those sports certainly grab the headlines and the big money, but it takes away from the fact that the majority of college athletes are not participating in revenue generating sports and likely not receiving the rock star treatment that football and basketball players get. Oddly enough, Yost acknowledges this, but then still throws the whole system under the bus.

Despite that major beef with the book, I still think it's worth reading as it has some interesting info such as salary structures for coaches, the bowl system, conference revenue distribution, etc. For instance, I'd forgotten that Iowa's Kirk Ferentz made $4.6 million in guaranteed money during one 13 month period in 2006-07 (yet we didn't hear about how Iowa was ruining college football like Alabama was accused of doing with Saban's contract.) Interestingly, Yost acknowledges that the big money coaches: Saban, Stoops, Tressel, Meyer, etc. typically are worth their salaries in that they earn their athletic departments huge returns on their investments. He's not necessarily endorsing the system, but saying that it makes sense and can't be argued with from an economic standpoint.

Regardless of whether or not one agrees with a single argument of Yost's, one cannot deny that he brings a plethora of topics to the table that require serious attention. At the very least, Varsity Green is a good primer for discussion on some serious issues facing our society today, such as the watering down of academic standards and other forms of favoritism that have impact well beyond the sporting arena.

At this point, the "official review" is over, but I wanted to include this bit in the main body of the post since things in the comments section often get lost in the shuffle. Think of this as bonus material on a DVD.

One hilarious section from the book on the facilities arms race involves a school that's a favorite among RBR readers: Michigan. A group of Michigan alumni that were against the expansion of Michigan's stadium and who, mostly, were not football fans operated a group under the name "Save the Big House." The last quote from Save the Big House spokesman John Pollack is golden and will sound familiar I'm sure:

"To enshrine wealth and power in glass and steel at the leading public institution totally undermines the values of the university itself. You are taking the classic football stadium in America and turning it into every NFL venue."

Pollack described the Big House as

"...a place where autoworkers and millionaires can come together to cheer on their team."

And here's the money quote:

"Michigan doesn't need to keep up with the Jones. We are the Joneses."