The Process by the Numbers: Part III - Running Man

Share All sharing options for: The Process by the Numbers: Part III - Running Man

Over the past two days we've looked at how Coach Saban's defense is aimed at getting opposing offenses off the field (Part I is here and Part II is here). What the numbers seem to be showing us is that Alabama's defense begins by shutting down the running game and subsequently creates ideal conditions for defensive backs to stymie first down conversions.

Having a Heisman-Trophy-winning running back and superstar-in-waiting backup helps considerably in achieving this goal but so too does having a beast of an offensive line. It's not by accident that the highest-paid offensive coach on staff is OL coach Joe Pendry who pulls in $40K more than OC Jim McElwain.

The Crimson Tide philosophy was explained point blank last February by Defensive Coordinator Kirby Smart at the Coach of the Year Clinics:

Historically, the teams that can run the ball and stop the run win more games. Offenses today want to throw the ball. The players like it, and it is fun. At the University of Alabama, we are not about fun. We are about toughness, being physical and winning ball games. The players have fun by winning games and championships.

Once again, the numbers bear him out. Basically, the Alabama running game is producing close to twice as many  yards per season as it was four years ago (88.19%) and more than three times as many touchdowns (see Table 1). Our opponent's ground game has been slashed by nearly a third (31.42%) in terms of total yards and less than half as many touchdowns (see Table 2). 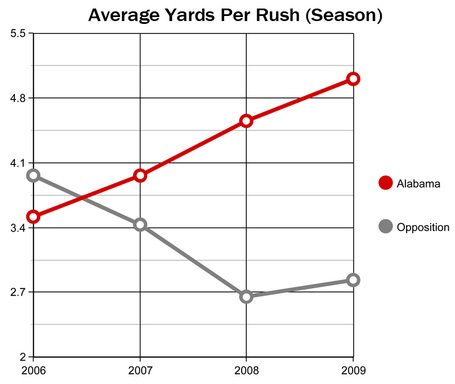 Certainly Mark Ingram's phenomenal 2009 performance helped that, but having a second tailback sensation in the backfield didn't hurt either. As Coach McElwain observed recently: "There is something pretty nice about having a fresh Trent Richardson or a fresh Mark Ingram in the game, rather than running them ragged." That "something nice" is a combined 2,462 yards rushing for the season. 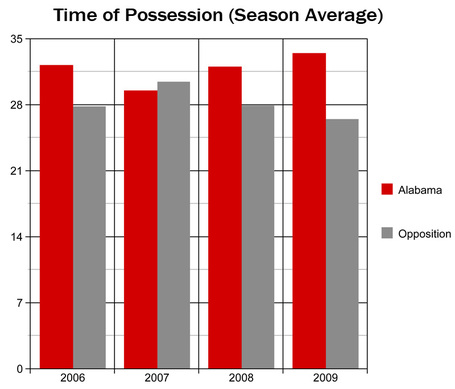 Still, rushing alone doesn't win football games. In fact, more and more statistical analysis suggests that the opposite might actually be true. The venerable panjandrums over at Football Outsiders have looked at all the numbers and insist that "You run when you win, not win when you run." While their analysis is of the pro game they are currently examining the issue in regards to college football and, thus far, the same rule seems to apply.

But the point here really isn't that a team must emphasize the pass to produce, rather it's what Chris Brown has argued at some length over the years -- it is a balanced offense is the most likely to produce results. Which, you'll be happy to learn, is the hallmark of the Crimson Tide offense under Coach McElwain (Table 4). 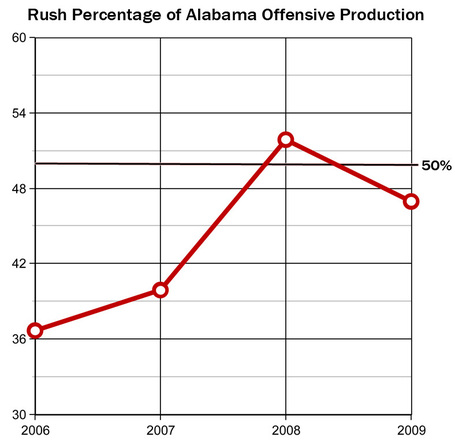