Share All sharing options for: Greg McElroy and the Vertical Passing Attack

In recent weeks, there has been an ongoing discussion here at RBR regarding the effectiveness, or lack thereof, of the Alabama vertical passing attack in 2009. Going back as far as last year, I have consistently argued that, by and large, we had no real vertical element in our passing attack, a contention that I have continued to support in recent weeks. Others, however, have disagreed to varying degrees.

Of course, though, the only way to objectively look at this argument is to go to the play-by-play data and see what we find. To that end, I've gone back through the play-by-play data for eleven games in 2009 -- the eight conference games, the Virginia Tech game, the SEC Championship Game against Florida, and the BCS Championship Game against Texas  -- and have specifically looked at the completed passes that resulted in a gain of 20 yards or more.

By my count, there were exactly twenty such plays in those eleven games, and after reviewing the film of each play, I've listed each of them in the following chart. I've identified and listed each of those plays by opponent, the receiver who caught the pass, the number of yards gained on the play, along with various notes concerning route types and defensive coverages. Click the following chart for the full-size version. 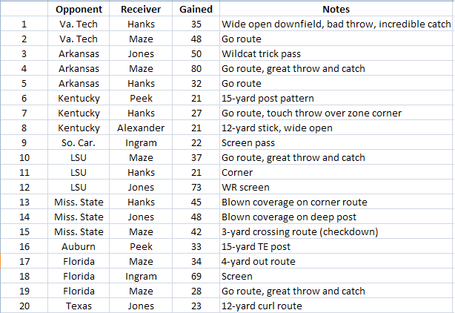 Pouring back over the raw data, I tend to think that the argument that I have been marking is largely validated with the findings. To begin with, having only twenty of these such plays is no great number, especially considering that the sample of games analyzed here included 275 passes by McElroy. As a whole, that means we had one passing play of twenty yards or more for about every 14 passing attempts, not necessarily a bad number per se, but by the same token certainly not something to be hailed as an achievement either.

With that said, however, I do think the lack of a vertical passing attack becomes more prevalent the closer you look at the data. The first two games against Virginia Tech and Arkansas went well enough, with McElroy making three great throws on deep routes, not to mention adding another great reception by Hanks and a touchdown on the trick pass out of the Wildcat. After those two games, though, it's a bit of a different story.

Beginning with the Kentucky game, that vertical element really begins to go away. Starting in Lexington, we largely begin to see the explosive passing plays coming solely on short-and-intermediate passes that the receivers turned into big gains. In fact, not counting blown coverages (see the MSU game), in the final eight games analyzed in this sample, I can only count three times on 196 passing attempts where McElroy completed a pass that was thrown more than fifteen yards beyond the line of scrimmage. In more concrete terms, that means that only about one pass in every 65 passing attempts in that stretch was completed more than fifteen yards beyond the line of scrimmage.

Again, the norm was short-and-intermediate throws turned into long-gainers by the receivers, where yards after the catch came in massive bunches. For example, we see Mark Ingram turning a screen pass into a 22-yard gain against South Carolina. Julio Jones taking a wide receiver screen caught two yards behind the line of scrimmage and racing 75 yards for a touchdown against LSU. Marquis Maze turning a three-yard crossing route against Mississippi State, a checkdown on a third and long where we effectively chose to take the safe route and punt the football, and quickly changing direction and out-racing the MSU secondary for 42 yards. Marquis Maze turning a four-yard out route on third and three against Florida into a sideline-racing 34-yard gain. Mark Ingram taking another screen against Florida and rumbling for 69 yards. You get the idea.

Also, on more of a non-quantifiable perspective, I find the distribution of McElroy's deep throws very interesting. If you look back and isolate each play, you see that McElroy tended to throw the deep ball down the right sideline very, very well. In particular on the go routes up the right sideline, McElroy typically made very good throws on that route on multiple occasions, drilling a deep ball on that particular route no less than five times in this sample. But when you look at his attempts in the deep middle and to the deep left, it's another story entirely. McElroy made a great throw to the deep middle to Marquis Maze in the season opener against Virginia Tech, but that is largely the extent of his production in that area. He only completed two more passes in that area the rest of the year -- one a trick pass out of the Wildcat to Julio Jones, and the other an incredible grab by a wide open Darius Hanks on a terrible throw against Virginia Tech -- and neither is exactly an endorsement of his deep passing abilities. And to the deep left, interestingly enough, McElroy didn't complete a single pass in that area all year long, with the sole exception of the touchdown pass against Mississippi State that resulted from a blown coverage. It may be a bit of a small sample size, but even so I find it interesting that McElroy seemingly threw to the deep right very well, but really couldn't do anything in the deep middle or the deep left.

In the final analysis of things, I think it is relatively clear that by and large we simply didn't stretch the field very well vertically for most of the 2009 season. We did some good things against Virginia Tech and Arkansas, but after that the vertical threat largely dissipates. From there, we were largely relying on blown coverages and yards after the catch on short-and-intermediate routes in order to generate big plays in the passing game, and the times in which we set up deep in the pocket and delivered a strike deep down the field were few and far in between. McElroy generally played very well in 2009, but I think it's clear that the one flaw of his performance was that he didn't consistently stretch the field vertically. I think the data here clearly supports that conclusion.

Now, moving forward, each year is different and in 2010 it's largely a given at this point that neither the defense or the special teams units will be able to perform at the level that they did in 2009. As a result of that, the Alabama offense needs to improve to compensate for expected declines with both the defense and the special teams units. But there's only one problem with that need.

The "problem," in so much as it can legitimately be classified as one, is that offensively we really have very little room for improvement. Despite the lack of a consistent vertical passing game, the 2009 offense nevertheless performed at a high level and was arguably the best offense we've seen at Alabama in the post-Bryant era. We didn't consistently stretch the field vertically, but generally speaking we did very well in every other regard.

Keep in mind that in 2009 we averaged over 32 points and over 400 yards of offense per game, plus the running game was arguably the best in the country, and of course there was that whole Heisman Trophy winner thing. Moreover, while McElroy didn't really stretch the field vertically, he did everything else almost to perfection. He commanded the short and intermediate passing game very well, completed roughly 61% of his passes, averaged almost eight yards per attempt, and had the lowest interception rate in Alabama history. And even the offensive line performed well in pass protection -- long since the Achilles heel for Alabama offenses -- by allowing only 20 sacks on 346 passing attempts (5.7% adjusted sack rate), and even in the relatively rare event that a sack occurred we tended to lose only a small amount of yardage (5.6 yards per sack).

So, while it's easy (and accurate) to say that the Alabama offense needs to improve to compensate for expected declines with both the defense and the special teams units, the problem is simply that the offense generally played at a high level in 2009 and it is thus very difficult to significantly improve further, regardless of how many starters return. The vertical passing game is clearly one area in which Alabama can legitimately improve -- with arguably greater offensive consistency, i.e. no October swoon like we saw last year, perhaps being the only other -- and to that end we clearly need to emphasize improvement in that regard.

With all that established, however, the truth remains that generally speaking the offense likely has relatively little room for improvement, and thus for Alabama to seriously contend in their bid to repeat as national champions, the onus may very well be on the defense and special teams units to quickly rebuild, regardless of what happens with Greg McElroy and the vertical passing attack. We can talk all day about how McElroy and the passing attack will perform in 2010, but unless the defense and special teams can quickly coalesce for the Crimson Tide, Glendale may very well be a bridge too far.