RBR Reading Room: A Time of Champions/Ain't Nothin' But A Winner

Share All sharing options for: RBR Reading Room: A Time of Champions/Ain't Nothin' But A Winner 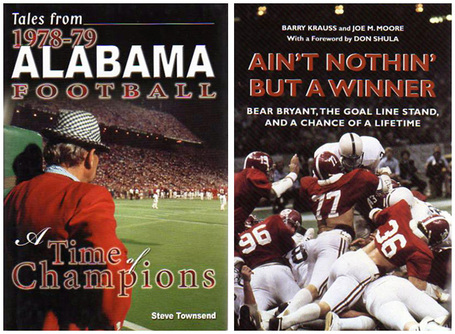 There is no more iconic moment in the Alabama/Penn State rivalry than the Goal Line Stand during the 1979 Sugar Bowl. That one play has come to embody the physical, determined approach the two teams share toward the game as well as something on the side of the sublime as well.

Certainly the fact the National Championship was on the line magnified the importance of the play but taken out of context it’s difficult to understand the gravity of the event. In terms of singular drama, the Goal Line Stand can’t match, say, the desperation block that clinched the Crimson Tide win over the Nittany lions in the final seconds of the 1989 contest between the two.

The Goal Line Stand was critical but by no means decisive. It occurred with more than five minutes to play in the game and with Alabama leading by a touchdown. There was a lot of football left to be played in the Superdome that fateful New Year’s Day. A score would have tied the game, not ensured a victory for Penn State.

In fact, its emotional power depends on the whole series of downs, from Don McNeal's hit that denied Penn State's Scott Fitzkee end zone and put the ball on the one yard line as well as both defensive efforts that kept the Nittany Lion's All-American tailback Mike Guman from scoring. The Goal Line Stand embodied the entire game in which it occurred as well as the season the Crimson Tide battled through to get to New Orleans in the first place.

And the outcome of the game didn’t answer the question of Alabama’s title either. The Crimson Tide had to wait two more days for the outcome of the final polls to be named the National Champion and even then folks on the west coast wanted to squawk about it. (Interesting aside: immediately following the poll results officials from ABC tried to put together a one-game playoff between Alabama and USC that was nixed by the NCAA)

Two books penned about Alabama’s 1978 National Championship team really help address this problem and give a full view of what that one play really meant and why it has achieved such stature in Crimson Tide football lore: Steve Townsend’s Tales from 1978-79 Alabama Football; A Time of Champions and Barry Krauss & Joe M. Moore’s Ain’t Nothin’ But A Winner; Bear Bryant, The Goal Line Stand and A Chance of A Lifetime.

From the point-of-view of the present, the 1978 National Championship season seems almost a pre-ordained event – the penultimate title for Paul W. Bryant, earned in the twilight of his amazing career. Both these books quickly discard that perception and reveal the season as a campaign that in doubt from the start and uncertain right down to the wire (and even past it).

The 1978 season started well with a number one ranking and a decisive victory over tenth-ranked Nebraska. The good feelings lasted until about halftime of the following week’s game against Missouri. The Tigers – who had proven an elusive foe for Coach Bryant in two prior meetings – turned the tables on the Tide that afternoon and seemed to be going for a hat trick against the Bear.

Tide linebacker E.J Junior blocked and recovered a punt and started a rally that led to the win. But a week after that, even his heroics couldn’t pull out a victory against No. 7 USC. Alabama fell to No. 7 in the polls and the chances of a National Championship reached a nadir.

Things got so bad that Alabama fans booed their team during the Vanderbilt game, according to Townsend. But by that time, Krauss writes, the team had come too far to consider giving up.

"What I remember about that season – particularly in the first half, when we were always behind and slugging it out for every win – is that we were a Big Play team. We lived off of them. They Turned losses into wins. They changed the momentum. They kept us alive."

Townsend’s book provides a superb over view of the rollercoaster ride. Each game is accounted for but also the intense lobbying for positions in the polls and bowls that had to fall into perfect place for Alabama to have a shot at the title.

The Nittany Lion's No. 1 ranking and undefeated record put Joe Paterno in the driver’s seat for the championship, his team’s final opponent of the season wasn’t clear until mid-December. And when that foe became clear, he realized he might have gotten more than he bargained for.

So when Krauss met Guman at the top of the pile in the fourth quarter and denied the Nittany Lion tailback back from reaching the goal line, it crystallized a whole season’s worth of suffering and perseverance for the Crimson Tide. As great as the play was, it encapsulated something even more given the trials of the team.

"If there was ever one person whose life was totally changed by actions occurring in that single instant, I am that person," Krauss writes. "For better or for worse, I became a part of the lives of those who had been impacted by that play."

Moreover, the Goal Line Stand was the perfect analogy for the game in which it occurred. Both squads were immensely talented, superbly coached and played at the peak of their powers. Neither team left anything on the field that day and players from both sides admitted it was the most punishingly physical contest they had ever played.

Krauss has become the hero of the game but the books introduce you to the whole array of great competitors on that team that made the championship possible; defensive back Murray Legg, linebacker Byron Braggs and the whole Redwood Forest Defense not to mention running back Major Ogilvie, quarterback Jeff Rutledge and split end Bruce Bolton.

Townsend’s tome has the staccato style of a sports columnist and a distressing habit of abandoning chronological order for the sake of dramatic effect. The result is less enthralling than it is confusing. Krauss slides into a good-ole-boy familiarity at times that is less than endearing. The impression is he’s writing the book more for his old buddies than a general audience and few things are more boring than listen to people talk about the dumb things they did in college like they were the greatest thing ever.

Still, these negatives are pretty minor compared to the wealth of detail and insight both books provide in terms of their subjects. And both go on beyond that fateful game to continue the stories. Townsend gives the blow-by-blow account of Alabama's 1979 season and Coach Bryant's final National Championship while Krauss relates his time in the NFL.

Still, the emotional centerpiece for both books is The Goal Line Stand and, as one might expect, the man who comes closest to pinning it down is Coach Bryant speaking on the eve of the big game to a select group of reporters in his hotel room.

"It’ll be like all big games. Probably, come down to a big play or two in the fourth quarter, and the team that makes ‘em will go home happy and the team that doesn’t will always wonder what they could have done differently. I just hope and pray tomorrow Alabama makes those plays."