'Bama Practice Back to Normal

Share All sharing options for: 'Bama Practice Back to Normal

Fall camp officially came to an end yesterday afternoon, and with the fall academic semester beginning today, practice sessions for the Tide will be getting back to normal. The grueling two-a-day practice sessions are over, and from here on out the practices that take place will be much more like what the team will see during the season itself. It's all downhill from here, and we're only a little over a week away from putting in opponent-specific preparations for the season opener against San Jose State.

With classes starting today, the roster officially expanded to allow for 105 players. In real terms, that means that Robby Green returned to practice today, and along with him a bunch of walk-ons that you've probably never heard of before. The athletic department will wait a few days before they officially announce all of the names of the new arrivals, but for now the roster is set.

And, believe it or not, it seems like we may have a late-breaking roster addition. We don't have anything official from UA just yet -- it will probably be a few days regardless -- but Travis Reier of 'BamaOnline spotted Harrison Jones working out with the team this afternoon: 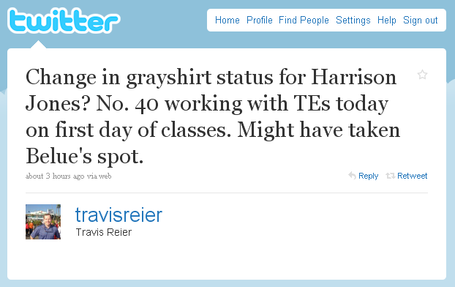 It doesn't take a football genius to figure out what probably happened to free up a spot. With Deion Belue officially biting the dust, that likely opened up a spot for Harrison Jones to avoid the greyshirt. Consider that very good news for both Alabama and Harrison. While Harrison remains a long-term project who will almost certainly redshirt in 2010, the biggest obstacle in his developmental path remains his lack of size, something that a four-month crash course with Scott Cochran and the S&C program will go a long way towards rectifying. No one really doubts Jones' athletic abilities and his skills as a receiver, and if he can quickly bulk up in the S&C program like his older brother did -- who, in twelve months, went from being way too light to play tackle to being a high-end guard -- then he may be ready to contribute sooner rather than later.

As for other practice news, the usual suspects round things up nicely. A couple of comments on a few developments:

Moving on, I think we're all familiar with the name Will Lowery at this point, but even so I doubt very many people know much about him. To that end, Don Kausler wrote an excellent piece profiling Lowery and other walk-ons today, and consider it a must-read. Money quote:

"I'm definitely the smallest and the slowest out of our secondary," he said. "Mark Barron and Dre (Kirkpatrick) and B.J. (Scott), those guys are phenomenal athletes, just the best athletes in the country. I know that I'm not ever going to be able to keep up in a straight race with those guys or bench as much as they do in the weight room.

You have to love a kid who, in an era of ridiculously inflated athlete egos, openly accepts his physical shortcomings and instead chooses to overcome adversity with hard work and dedication. The bit about Reamer sums up the route that so many of the 2009 starters used to earn playing time.

Finally, we have the second scrimmage of Fall coming up this Saturday, and pay especially close attention to this one. With practices now becoming shorter and more infrequent, and with opponent-specific work coming shortly, repetitions will become a very scarce commodity that are only rewarded to the players that you know for certain that will be called upon in meaningful situations. In real terms, it means that the guys who legitimately want to play this year better get it together immediately, and after this scrimmage is all said and done we'll largely know which players will play, which players will ride the pine, and what roles these players will be called on to perform.

Update: Gentry Estes confirms that Harrison Jones returned to the team today. He, however, mentions the developments with Jeramie Griffin and Kendall Kelly as the possible avenues in which Jones avoided the greyshirt, and makes no mention of Belue as a possibility.