Another day of practice has come and gone for the Crimson Tide, with the season opener being sixteen days away. All in all, it seemed like a pretty slow day on the news front, but a few points should be mentioned:

You can forget about Alfy Hill for this year. Saban himself admitted there was no chance to get him back this year, and UA confirmed that Harrison Jones took his spot. At this point it's just a question of JUCO or prep school. Simply put, the NCAA Clearinghouse isn't going to suddenly do a 180 (again), so Hill is going to have to go somewhere and re-take some courses.

Corey Grant was back at tailback today, with Saban confirming that it was indeed an an experiment for an emergency situation. I'm thinking the return of Menzie had something to do with that. If nothing else, I suppose that in an absolute emergency that Brandon Gibson could move over to safety and Corey Grant could play cornerback. Hopefully it doesn't come to that, but if the Injury Gods frown upon us, that should be the plan.

DeMarcus Milliner once again missed practice with his ankle sprain. He hasn't practiced all week, so you can probably scratch his name from the scrimmage on Saturday. If someone like John Fulton or Phelon Jones really wants to see playing time this year, I suggest they better bring their A-game on Saturday afternoon. For Milliner, if he cannot return in the next couple of days, the focus will likely turn to getting him healthy in time for the season opener.

And finally, you can back off the ledge when it comes to uniforms. 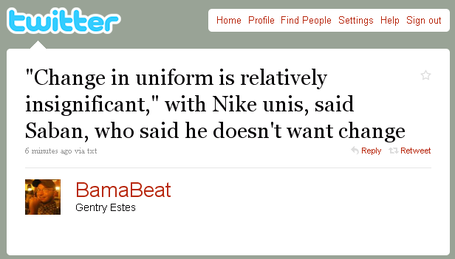 I'm betting, at most, a throwback to the 1960's... white helmets, maybe some numbers on the sleeves, and maybe a newer 'Bama logo (script A?) by the left thigh. And honestly, if they go that route, it sounds good to me. It's a nice look when done properly, and if nothing else it is legitimately based in Alabama history. Furthermore, we used those uniforms during arguably the greatest stretch of Alabama football history, so it sounds like a winner to me. Besides, that design was good enough for Bryant, and if it was good enough for him it's good enough for me.

Now, don't get me wrong, I hate Nike as much as the next guy, but give them at least some credit. They're trying to make money by selling their merchandise in mind-blowing quantities at ridiculous prices, and I'm sure they are smart enough to realize that pissing off a massive, dedicated fanbase that probably consumes hundreds of million dollars of athletic merchandise a year isn't going to help them accomplish that goal. To that end, you'll probably see a few token changes, but largely much ado about nothing. We're not Oregon, and I doubt they'll have the guts -- or the lack of intelligence -- to sign off on major changes, and that's assuming that UA would even allow that (which it seems pretty clear that Saban would not). I'm thinking we're going to see a throwback uniform more than any substantive changes.

Update: One more thing that's just entirely too good to pass up, this one courtesy of Gentry Estes. Need to get fired up for football season? This ought to do it:

Vlachos walks into media room with 6 stitches between his eyes: "Upshaw. 3rd and Long."

Awesome. Oh yes, football season is near. If that doesn't get your blood boiling and make you want to throw your laptop across the room and then run out into the street and spear the first ten guys you see, you need to visit the Mayo Clinic ASAP to figure out exactly what in the hell is wrong with you.

And, as an additional note, this certainly doesn't do anything to dampen my expectation that Upshaw will have a big year in 2010. Either way, third and long can't come soon enough. It's going to be fun showing some opponents that Marcell Dareus isn't the only one who in crimson who can rush the passer.