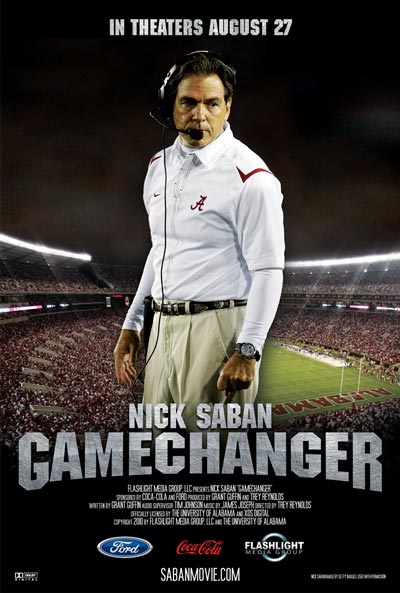 Knowing that many of you will be seeing it this weekend and now that I've had a chance to get a bit of sleep, I'll shelve the hyperbole of last night's tweets (1 - 2) and say a few rational words about the film Nick Saban: Gamechanger.

Gamechanger isn't the filmmakers' first Alabama related project and having seen all five discs of their excellent Defining Moments: Alabama series (not to mention being incredibly ready for the season to start), I went into this with astronomically high expectations and the hopes that it wouldn't be hagiography in the form of a documentary (and received tweets from others hoping for the same thing.) Saban's leaving Miami wasn't left out (how could it be though) so you can't accuse it of being all sunshine and rainbows. It was interesting hearing Saban, his agent Jimmy Sexton, Mal Moore and Paul Finebaum all talk about the timeline of the end of the Dolphins' season and Moore's flying to Miami without an appointment and Saban finally agreeing to take the job.

Needless to say, there are no interviews with Wayne Huizinga or the Miami media, but including something like that would've been outside of the scope of what this film's really about...and that's Nick Saban's methodology aka "The Process" that we all love to talk about so much. One of the things I enjoyed most was hearing his former and current colleagues discuss Saban's single-mindedness, focus and relentless work ethic (with some particularly great quotes from Scott Cochran.)

Also, the focus on the the 1998 Michigan State game against Ohio State where Saban claims The Process was ultimately born was fascinating. A 4-4 Michigan State went into Columbus as 28 point underdogs and beat the undefeated Buckeyes, who went on to finish with an 11-1 record. Game commentator Brent Musburger called it "The biggest win of Nick Saban's career" at the time (video highlights here.)  Saban said that game taught him that taking the approach of winning every play and not worrying about the result was the right way to prepare. We've certainly seen the fruits of that methodology.

There are some moments of humor as well including Saban talking about how the accordion pushed him further into sports and Antonio Langham joking with Saban about needing to add him to the coaching staff. There are also interviews with the Saban family and I tell you, after seeing that, we really have to appreciate the sacrifice that family makes for our program. Sure, they're richer than most of our minds will ever fathom, but they have a husband and father that works insane hours and is always on the road or the phone or at the office. They all seem to love and enjoy it, but at the collegiate level anyway, it certainly appears to be a family job, not just Nick Saban's job.

Upon leaving the theater and driving home I couldn't get over the thought of how incredibly lucky we are as a fanbase to have Saban steering the ship. I think it was Bill Belichick that said Saban has managed to get everyone to buy in: the players, the other coaches, the office staff, the fans and even the people that clean the locker room. We all do our part, we're all a part of The Process. Gamechanger will have you fired up and ready for Alabama football. I could go on and on with reasons why you need to see it, but perhaps Todd said it best this morning: