There is no getting around the fact that immersing half your body in ice cold water after a hard workout is an agonizingly hateful experience. Yet few things as unpleasant have been shown to offer as much beneficial effect on you afterward.

If you watched the ESPN special on fall practice Training Days: Rolling with the Alabama Crimson Tide you learned that the football players at the Capstone are very well acquainted with this particularly painful paradox.

Under Coach Saban, the practice of post practice ice baths have become a staple for the team. As the ESPN show depicted, huge tubs of ice water are on hand for the players to plop into as they depart the practice field. The logic, according to Alabama’s Director of Sports Medicine and Head Football Trainer Jeff Allen, is that it will help them recuperate from their ordeal on the field that much faster.

"If we can bring their core temperature down their bodies will not have to work as hard to recover," Allen explained in the special. "Therefore they won't be as fatigued and hopefully they will be better for the next practice."

As a marathon runner who has been using ice baths for several years this comment struck me as particularly interesting. I turned to using cold immersion as a means to help reduce injury and aid recovery but the reasoning behind it I was following was somewhat different.

The idea, as I understood it, was that as your body is exposed to cold blood is shunted to core areas from the surface to preserve organ function. The result is the capillaries that bring oxygen to the muscles contract restricting blood flow. This creates extreme discomfort but, within minutes, the circulatory system cranks up the pressure pushing blood into the frigid regions. This accelerates the removal of waste products and scar tissue which can lead to soreness.

All of which makes sense since the ice bath becomes bearable if you can get through the first five minutes or so and it definitely feels better afterward. But that doesn't mean it's correct. Moreover, it isn't at all what Allen was describing on the ESPN show.

So to sort it out I gave a call to one of the recognized experts in the field, Douglas J. Casa, the director of the Korey Stringer Institute at the University of Connecticut.

It turns out that as reasonable as my theory seems to be, the pathophysiological proof that ice baths boost muscle repair just isn’t there.

"Right now there isn’t any evidence to show a reduction in injuries," Casa said. "And we don’t have the evidence yet that there are actually things changing at the cellular level."

While Casa noted he believed further studies were likely to confirm the theory in the future, the fact that a very real decrease in post-workout discomfort showed the practice had merit. In terms of training, that kind of soreness can impede later workouts and cut into progress.

The real key, as Allen pointed out in the ESPN show, was getting an athlete's temperature down to normal levels quickly. Rather than diverting energy to cooling down, the athlete's body can get to work on repair that much faster. Moreover, Casa said, they can better do the things necessary to recovery.

"When you are talking about a large individual like a lineman, it could take an hour or two for their body temperature to return to normal," Casa said. "He’s going to drink better, eat better and rest better the sooner he can get cooler."

And while the experience of dropping your body temperature from 100 plus to something more in the ballpark of normal might feel downright agonizing, it isn’t particularly dangerous for a healthy athlete, Casa said. "The real danger is if he's overheating." 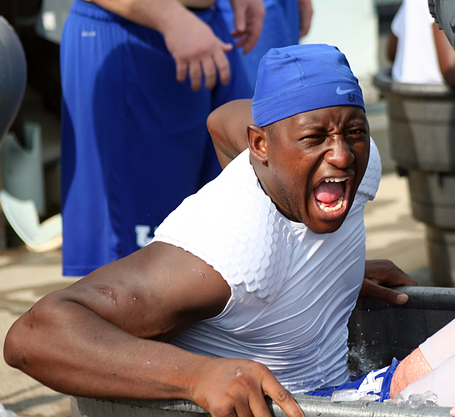 In the ESPN special, quarterback Greg McElroy commented that Alabama had only started doing post practice ice baths "over the past couple years." That dovetails with Casa's observation that the popularity of the procedure had grown substantially nationwide over the past few years.

Other college teams that regularly use post-practice ice baths include TCU, Kentucky, Oklahoma and Ohio State.

And since the Crimson Tide has resorted to using them, the number of injuries during fall practice seems too have ebbed somewhat.

While there are the usual litany of lingering, nagging ailments there has been a paucity of those dreaded long-term injuries that we live in fear of during this part of the year. This, as our own OTS points out, is also due to Coach Saban’s emphasis on thud drills that avoid actual to-the-ground tackling outside of scrimmages.

Yet that aside, there's another reason to use the ice baths that does have the science behind it -- to increase performance. And the improvement in that department is evident every Saturday the Crimson Tide takes to the field.

Obviously, the key to Alabama’s conditioning and strength advances lay in Coach Cochran’s distinctive approach to his personal fiefdom. Yet ice baths are a key part of that for exactly the reason Allen pointed out -- they shorten recovery allowing athletes to get additional quality workouts in over the same amount of time.

That leads to increase in performance which is something that has been documented. In fact, Casa is preparing to publish a research paper that examines the results of 30 studies on the subject. They found that elite athletes can experience a 3 to 4 percent increase in performance using the procedure. Which is a huge amount for players of the athletic caliber Alabama boasts in the Saban era.

This isn’t a revolutionary discovery in and of itself. It has long been known that reducing recovery time leads to significant strides in performance. In fact, a whole swath of performance enhancing drugs have been designed specifically do this very thing. Creatine, stimulants and "fancy" protein on the legal side of things were all created with the intent of helping athletes maximize their workouts by cutting down the time needed for recovery.

All of which underscores the beauty of ice baths: "They are legal, cheap and actually safer for the athletes who use them," Casa said.

The issue of safety also underscores the advisability of ice baths -- they ensure a team is prepared in case any player begins to show any symptoms of exertional heat stroke. A key point Casa stresses due to his role as the head of the Korey Stringer Institute which is a clearing house for information about the dangers of heat stroke to athletes established in the wake of the death of the Minnesota Vikings lineman in 2001.

Cold tubs on the side of the field for post practice ice baths means that trainers are already prepared to assist any player who shows the slightest sign of heatstroke.The first thing you want to do with a player suffering from heat exposure is to lower his body temperature as quickly as possible. Having a large amount of ice and water in tubs ready to go on the practice field pretty much leaves you ready in case it happens.

Moreover, forcing the players temperatures down to more reasonable levels at the conclusion of practice ensures none will develop symptoms after if they continue to heat up afterward, Casa said.

A big tip o' the houndstooth fedora to the able assist by SI's Will Carroll. If you want to know about injuries and how they relate to sports, you'd do well to follow him on twitter @injuryexpert.