Share All sharing options for: Shilling for a Good Cause: Crimson Tide 2010 Limited Edition Football Raises Funds for Make-A-Wish Foundation of Alabama

Normally we only promote things around here to get free stuff, but this is a good cause and the man who is promoting it, Bob Ibach, is also the guy responsible for promoting the first edition of Yea Alabama and the man who got me on WJOX, so even if it wasn't worthwhile we would still probably kind of owe him. We've posted about these several times before (after the 2008 season and again after the 2009 National Title), so I'm sure y'all are all familiar with the fund raising efforts of Nikco Sports by now.  Well, they're at it again, this time offering a Gold Football celebrating the Crimson Tide's 13 National Championships: 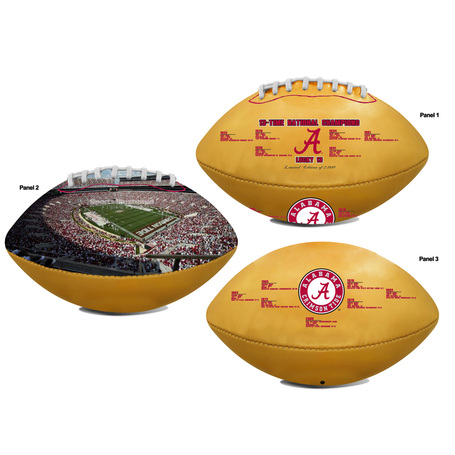 Just like the last two times, funds from sales of the football will go to the Make-A-Wish Foundation of Georgia and Alabama.  Press release and more details after the jump:

The number 13 certainly has proven to be a lucky number for fans of Alabama Football.

It is a number that brings back wonderful memories of championship seasons on the gridiron, dating back to the first one in 1925 when the team went unbeaten (10-0), and through the most recent title posted in 2009, (14-0), when the Crimson Tide beat Texas in the Rose Bowl.

The 37-21 victory over Texas last January capped a season that will long be remembered, including the university’s first Heisman Trophy. Heading into the 2010 season opener on September 4 against visiting San Jose State, followed by a September 11 home game against 9th ranked Penn State, expectations are running very high for the nation’s pre-season No. 1 ranked college football team.

To honor Alabama’s glory-filled football history, and to recognize the fifth-largest stadium in the United States (Bryant-Denny Stadium has a 101,821 capacity), Nikco Sports is marketing a very limited edition GOLD Alabama "Lucky 13" football that will also continue to raise funds for the Make-A-Wish Foundation of Georgia & Alabama, along with other Make-A-Wish Foundation chapters in nearby Central & North Florida and Mississippi.

Only 2,010 regulation-sized GOLD footballs, complete with a handsome acrylic display case, are being made available for Alabama fans prior to the first game of the 2010 season. Each football sells for $99 and comes with a numbered certificate of authenticity to enhance the value of the product. In recent years, Nikco Sports has raised more than $1.7 million for children’s charities, including a very successful project last January following the NCAA title game.

The Gold Alabama "Lucky 13" footballs are manufactured by Rawlings and are officially licensed by CLC. Fans can order by calling 1-800-345-2868 or visiting www.nikcosports.com. The Gold Alabama "Lucky 13" football will feature historic information printed on various panels of the ball, along with an attractive panoramic full-color wide-angle photograph of historic Bryant-Denny Stadium on one of the panels. These will not be sold elsewhere else in the market, making it a "must-have" for any diehard Bama fan, something that can be displayed proudly at home, in an office or used as a fundraising gift at golf events or silent auctions.

Here’s a quick overview of the football:
One of the gold panels will contain three different Alabama logos, and include a section that reads "13-Time National Champions". On this panel will be a celebration of national titles won in 1925, 1926, 1930, 1934, 1941 and 1961, and include some specific info about each title won.

The 3rd gold panel will feature a color panoramic photo of Bryant-Denny Stadium, a facility that ranks 5th in size in the United States with a capacity of 101,821, and 7th in the world excluding non-racing stadiums.

Only three times in history has Alabama repeated as the national football champion, something the 2010 squad hopes to add to this coming season. The Tide won back-to-back national titles in 1925-26, 1964-65 and 1978-79.

"Alabama is coming off a tremendous season where it recorded a record 14-0 mark, and I know expectations are very high for another possible run towards a national title in Tuscaloosa," noted Nikco Sports CEO Craig Bidner, whose company has given back regularly to communities since its inception in 1992. "When you think of Bama football, which dates back to 1892, you think of their rich history, and all those national titles. We wanted to give Bama fans something unique on one football that celebrates all of that rich history, and all 13 titles. We believe we’ve come up with the perfect item that any Bama fan will cherish for years to come: a Lucky 13 Gold Football!

"We’re also very pleased and honored to once again work with the Make-A-Wish Foundation® of Georgia and Alabama, as well as other nearby chapters, to help youngsters who have some life-threatening medical conditions, as we did last January when the Tide won its 13th national title. That was a fun project, and we hope this time around will be as rewarding."

About the Make-A-Wish Foundation

The Make-A-Wish Foundation® grants the wishes of children with life-threatening medical conditions to enrich the human experience with hope, strength and joy. Born in 1980 when a group of caring individuals helped a young boy fulfill his dream of becoming a police officer, the Foundation is now the largest wish-granting charity in the world, with 65 chapters in the U.S. and its territories. With the help of generous donors and nearly 25,000 volunteers, the Make-A-Wish Foundation grants more than 12,600 wishes a year and has granted more than 168,000 wishes in the U.S. since inception