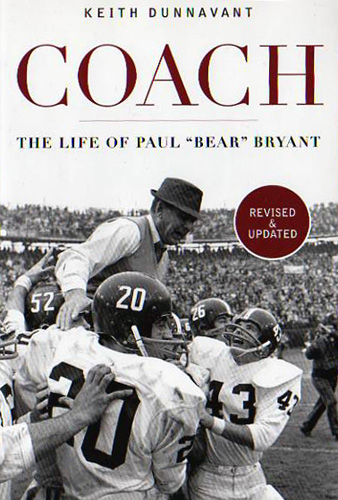 Alabama football is synonymous with one man – Paul W. Bryant. It is a fact that must be recognized and acknowledged before any true understanding of the program can proceed.

This presents a serious difficulty since Coach Bryant's legend was already formidable during his lifetime and has scarcely dimmed in the years since. The night the Crimson Tide won the 2009 National Championship in Pasadena, an anonymous fan left a single rose in the hands of the coach's statue. And every Alabama fan who heard about it felt it was completely fitting.

Despite that consensus of feeling, its almost impossible to condense into a simple explanation for others. Coach Bryant was a tough cookie to pin down when he was alive, and the task has only gotten harder since he passed away. The passage of years and the abundance of anecdotes have complicated things rather than clarified them.

Keith Dunnavant's 1996 book on Coach Bryant's life, Coach, The Life of Paul "Bear" Bryant is recognized as one of the best biographies of the Alabama legend. While it doesn't seem to completely succeed at getting to the heart of this complex man, it certainly provides one of the best overviews of his life.

The story is simple enough: the son of an Arkansas sharecropper becomes a football player at a famed university and helps his team to a national championship. He then goes on to resurrect a series of downtrodden programs before becoming head coach of his alma mater and leading it to the greatest successful era in college football history. He stepped down after amassing the winningest record of any coach in the sport and passed away almost a month later.

The problem is it does nothing to explain that strange charisma that made players follow him unwaveringly despite the brutality of his practices and seemingly callous feelings for them. It can't address his importance to the state and the South as a whole that went far beyond his position as a football coach. And it can't tell why all of this reverberates so strongly almost three decades after his death.

Dunnavant's book does a great job in trying to bridge this immense gap. He tells the story of Coach Bryan'ts life in a literary fashion relying on chronological order when it suits the narrative and abandoning it when it does not. He follows the ebb and flow of events that shaped Coach Bryant's life and, in turn all those around him his life affected.

One canard Dunnavant takes particular care to destroy is the idea Coach Bryant hewed to a conservative approach to the game – defense and a rushing attack were the mainstays of his approach. Instead, Coach shows that while Coach Bryant wasn't by any means an innovator, he wouldn't hesitate to absorb a new strategy or approach if he thought it would give him an edge.

"Rather than being chained to a set of beliefs, Bryant was a pragmatists who was strengthened by the ability to adapt in order to give his team the best chance of winning," Dunnavant writes.

It was, Dunnavant argues, his emphasis on organization to maximize results while preparing his players physically and psychologically that made him as successful as he proved to be.

Dunavant's other book on Alabama football is the excellent The Missing Ring which recounts the Crimson Tide's 1966 season and subsequent snubbing for the national championship. "Unbeaten, untied and uncrowned," as he aptly phrases it.

The dual approach works well since The Missing Ring ends up being more about Alabama football and not Coach Bryant specifically. In Coach, the 1966 season is one element of the tale and the factors that went into its unfolding and the people who were involved are much more the focus.

The other book that Coach must be evaluated in terms of is Alan Barra's biography of Coach Bryant, The Last Coach. Yet the way these two great books approach their subject matter is sharply different.

The dual approach works well since The Missing Ring ends up being more about Alabama football and not Coach Bryant specifically. In Coach, the 1966 season is one element of the tale and the factors that went into its unfolding and the people who were involved are much more the focus.

The other book that Coach must be evaluated in terms of is Alan Barra's biography of Coach Bryant, The Last Coach. Yet the way these two great books approach their subject matter is sharply different.

As a result, Coach is a much more personal work. It takes a great deal of time trying to humanize a man whose legend makes such a task almost impossible. There's far too much invested in what Coach Bryant represented to completely ever see him as an individual. An Dunnavant points out this was a situation that Coach Bryant encountered with regularity during his lifetime.

"Coach Bryant had a kind of magic to him," Dunnavant quotes a former player saying. "It was something you couldn't really put your finger on, but you could feel it whenever he walked into the room."

Still, the effort is important. While Dunnavant might not succeed at unearthing exactly what made Coach Bryant tick he does come closest at touching the emotional core of what he came to represent. I've read this book several times and still find myself tearing up at the account of Coach Bryant's last months and passing. I'll bet the next time you read it, you will too.