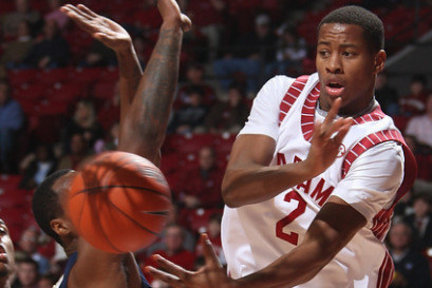 Mikhail is up and walkin' on his own. Not yet able to speak, but is communicating with smiles and emotion. He's eating small portions of food... He has a long road ahead of him and many hours of rehab in the future.

The former Alabama basketball standout has been hospitalized since Aug. 20 after collapsing during a workout at the IMG Academy in Bradenton, Fla. According to Walters, Mikhail has been moved out of ICU into a private room. He's showing progress but it has been slow going.

What is becoming clear is Mikhail's medical expenses -- both for his hospitalization as well as the extensive rehabilitation that he must undergo -- are going to be expensive and a significant financial burden on his family. To help defray the costs, a fund has been established thorugh The Tuscaloosa Tip-Off Club, a booster club made up of Alabama basketball fans from the Tuscaloosa area.

The Tuscaloosa Tip Off Club is a registered non-profit organization working through the university. Walters says donations of any amount will be greatly appreciated. They can be sent to the following address: