Share All sharing options for: RBR Reading Room: Tales of the Tide 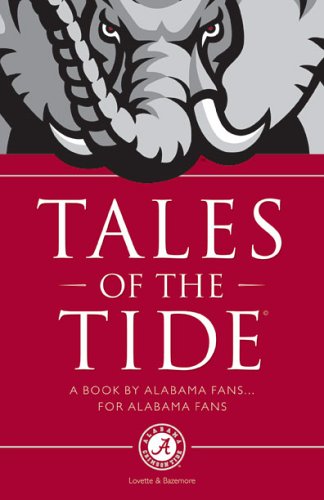 Alabama fandom offers a rather strange paradox to the initiated, as absolute and powerful as it is to those within its glorious thrall, pinning down exactly what it constitutes is deuced difficult. It’s ineffable and all the more powerful by its quicksilver nature. But if you are among the believers, there’s no doubt about it at all.

The 2004 book Tales of the Tide doesn’t plump the philosophical depths of this conundrum but, instead, provides a compendium of anecdotes from the faithful that provide a reassuring tapestry of the state of grace shared by the Crimson Tide faithful. Instead of trying to explain it, editors Clint Lovette and Jarrod Bazemore strive to show you through the testaments of 54 fans.

There are stories are a lot of what you expect;  quite a few recollections of attending particular games (the ’92 Sugar Bowl is mentioned a lot) and a lot of reminiscing about how this person or another became a Crimson Tide fan. But that's not all by a long shot. There are impromptu road trips to away games, tailgating misadventures and even Alabama basketball and baseball are represented.

One of the book’s strengths is the deliberate variety in the contributors. You have a few famed players such as Lee Roy Jordan and Steve Sloan of course but there are also the family of players as well (Bob Tiffin, Van’s father and Leigh’s grandfather). There are Alabama alumni and folks who never took a class at the Capstone.

There are Tennessee fans describing battles with their Alabama-rooting siblings for the loyalty of their nephews. There are encounters with classy Penn State fans and not-so-classy Miami Hurricane partisans. Auburn is mentioned a lot and rarely in glowing terms.

And the type of stories are extremely varied. There are tales of that moment where Alabama fandom was born and others of how it was passed on to another. There are accounts of different fans chance meeting with Coach Bryant, Coach Stalling or some random encounter with a player that left a much stronger impression on their lives than they ever expected.

(Although I swear I heard that exact same "I peed next to Biscuit in the bar bathroom" story when I was at Alabama in '86.)

The best exegesis of the peculiar degrees of devotion Alabama football inspires remains Warren St. John's Rammer Jammer Yellow Hammer. That tome provided an analysis of the condition of ardent fandom through the prism of the Crimson Tide faithful. It’s depiction of following the roller coaster of emotion that was the 1999 season is as close to describing the odyssey all of us embark on each August.

Tales of the Tide isn’t that introspective though. It doesn’t concern itself with examining the condition of being a fan, but somehow both book uncover the same basic truth: Alabama fandom may be centered around the greatest college football program in history it is the community that has emerged which makes it special.

The refrain of our rivals about how many of our brethren never attended the University of Alabama lacks much power over us since the ties of fandom represent something much more profound than the bureaucratic acknowledgment of the registrar. It misses the point of being a Crimson Tide fan completely and Tales of The Tide is a testament as to why.

The stories in Tales of the Tide are punctuated with the events of peoples lives; weddings, graduations and anniversaries. There are fathers and firstborn children as well as sibling rivalries and matriarchal patience. It boasts fast friends that maybe don’t keep in touch like they used to and devoted couples who still seem amazed they were lucky enough to find each other. Alabama football is the shared setting for these tales but it's their individual lives are the main event.

And the book has power because it is so easy to recognize your own world in the stories. The personal snapshots that accompany each chapter are touching not because they bear any direct significance to the reader in and of themselves, but rather because they remind of our own tokens of fandom – those blurry tailgating shots, kids in Bama gear, group shots of school chums and family that we wouldn’t part with for the world. They ring true because there isn’t any irony involved at all.

This book isn’t really one to read all the way through. It’s better to keep it around for that long long off season when the wait seems unbearable. Read a few chapters and while the ache for football season might be a bit more acute, you’ll know that your fellow fans are still out there waiting patiently along with you.