Earlier today, Coach Saban gave his press conference to kick off fall practice and had a number of comments on players and expectations for the upcoming season. He also offered this little nugget of information:

We here at RBR have learned that when Coach Saban drops a bit of knowledge on us, it's well worth the effort to dig up the data. And the numbers are mighty revealing. In 2009 Alabama opponents got into the red zone 24 times and came away with points on 16 occasions (eight TDs, eight FGs) or for a success rate of 66.67%.

That not only was the best in the SEC it was the third best in the nation (Iowa State was second with 60%. No, seriously, Iowa State. And, no surprise here, Nebraska was the best in the country by allowing a stultifying 57.14%). Here's a look at each SEC team's Opponent Red Zone Conversion numbers and the points allowed (minus PATs):

It's worth noting that not only did Alabama have the best percentage in the conference, the Crimson Tide was also the most successful in keeping opposing offenses out of the red zone entirely. It only happened 24 times; nine less than Florida permitted and 15 fewer than South Carolina allowed. In fact, Alabama was tied with TCU in the category nationally while the Crimson Tide's eight allowed red zone touchdowns was easily the country's best.

Lastly, the trend of the Crimson Tide defense to stymie opposing teams inside the 20-yard-line has been improving noticeably each year. Since hitting a high of 89.47% (34 of 38) in Coach Saban's first season, the number has dropped more than 25%. 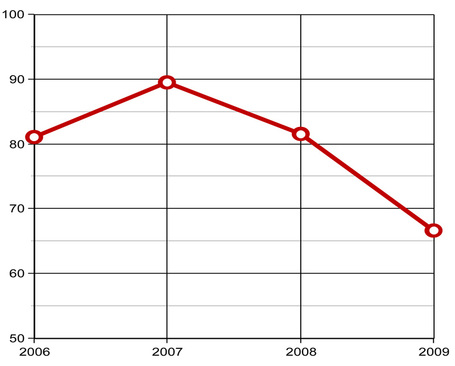 Note: After considering 5026's comment asking about the breakdown between TDs and FGs I revised the final column of the table to include total Red Zone points allowed instead of each team's final record. - kleph