Mark Ingram Back for Penn State?

Share All sharing options for: Mark Ingram Back for Penn State?

The general thinking on Mark Ingram's knee injury is that he will probably miss a couple of games but will likely return in time for the Tide to make the road trip to Fayetteville to take on Arkansas. But could he possibly return for the Penn State game? Perhaps that will not be the case, but one sports injury guru thinks it will happen. We bounced message back and forth with Will Carroll on Twitter yesterday afternoon, and he replied: 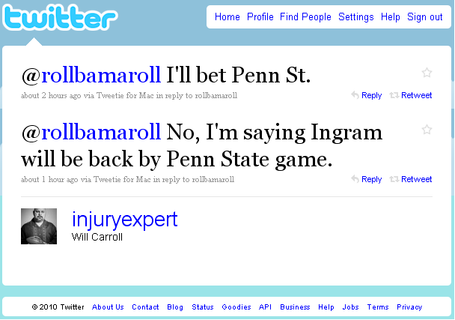 Now, admittedly Carroll turns off a lot of people because he does have a bit of an abrasive personality at times and some cannot get past the Pete Rose incident a few years back, but I've been a longtime reader of his "Under The Knife" columns at Baseball Prospectus, and I can attest that Carroll indeed knows his stuff on sports injuries. His book is widely considered a must-read for those looking for solid information on common sports injuries. Moreover, he has quite a few contacts throughout the sporting world, and given that this surgery was performed by two high-profile surgeons with a laundry list of superstar athletes on their surgical resumes, it's possible he could know something the rest of us don't. At the very least, if someone like him is saying definitively that Ingram will be back in time for the Penn State game, well, it's something that you at least ought to consider.

As an additional point, I'll keep beating my dead horse on injuries in college football... we never really know the exact nature of the injury, and not only do coaches have no incentive whatsoever to openly disclose injury details with complete honesty, they have every incentive imaginable to be as deceptive as humanly possible. All we ever get is blanket, ultimately useless statements by coaches, like "Player X banged up body part Y yesterday and had surgery," all the while completely omitting the countless number of ways that the aforementioned body part Y could be injured, or the countless number of treatment options available to treat body part Y.

So, in the end, we really don't know what happened here. We know he hurt his knee, but we don't know how he injured it (nor did we even know which knee he injured until late this afternoon). And not only do we not know the severity of whatever he injured in whichever knee, we do not know what was done medically to correct whatever injury he suffered (if anything). All we really know is that he had arthroscopic knee surgery, but keep in mind that arthroscopic knee surgery is a minimally invasive procedure that at times is used purely for exploratory purposes.

I've speculated that he probably injured his meniscus in some manner, and in that regard perhaps his knee was just scoped, they saw no damage, and now it's just a matter of time waiting on the scars to heal and the post-surgery swelling in the knee to reside before he is good to go once again. Keep in mind that all Saban said was that Ingram would miss the San Jose State game, and made no guarantees beyond that. And, thinking from a coaches perspective, if there was no real damage here and Ingram will indeed be good to go by the Penn State game, why try to rush Ingram back into action in a meaningless game against a cupcake, and why advertise to the world -- and the Penn State coaching staff -- that Ingram will play next Saturday? Again, he has every incentive not to do either one of those two things.

Now, maybe that's all not the case. Perhaps this injury will indeed keep him out until the Arkansas game, I'm not directly claiming otherwise. My point, though, is just that we never really know the full situation behind injuries, and we literally know absolutely nothing of substance here. Yes he could miss a few weeks if there was some structural damage to the knee, but we don't know if that was the case or not, and it could have just as easily been that there was no real structural damage and Ingram will be ready to go against the Nittany Lions. Truth be told, we really have no definitive way of knowing one way or the other based on the complete lack of information we have.

In any event, for what it's worth, to close, Trent Richardson expressed some hope for the exact scenario while talking with the media yesterday after practice, confirming it with just six words:

If nothing else, it's hope.