Thunderstorms on the Horizon?

Share All sharing options for: Thunderstorms on the Horizon?

According to the weather forecasts of the National Weather Service, per the Tuscaloosa News, it looks like we may be in for rain tomorrow night against Penn State:

The National Weather Service is predicting possible showers to move through Tuscaloosa right around the 6 p.m. kickoff of the University of Alabama and Penn State matchup.

A front approaching from the west is expected to pass Tuscaloosa Sunday morning.

"We expect scattered to possibly numerous showers and thunderstorms ahead of that front," said NWS meteorologist Tara Golden.

For what it's worth, the hour-by-hour forecasts at Weather.com show this for tomorrow night: 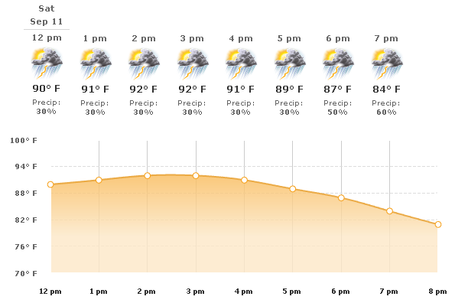 Of course, I'd be fighting every natural personal instinct if I didn't mention that I generally feel there's no more of a joke profession than those who make a career out of predicting the weather, so this may all be more of an exercise in meteorological uncertainty and incompetence when all is said and done, but even so keep it on your radar screen (no lame pun intended).

One way or the other, let's all hope that the Rain Gods will hold off until after the game is over. I suppose rain wouldn't be a huge concern for 'Bama simply because that would put more emphasis on line play -- and 'Bama should hold the edge in both line match-ups -- but on the whole I think a wet playing surface would give an advantage to Penn State. That would probably limit the passing game, in which we should hold an edge, and it would also take away much of our speed advantage, just like all of the muck and the mud took it away from LSU when they faced Penn State last year in the Capital One Bowl. Also, slippery conditions and a wet football would likely shorten the game and increase the chances of Penn State being able to find a big play via a fumble or a muffed punt.

It's not a freak-out situation by any stretch regardless of what the Rain Gods decide for tomorrow night, but if you've got wish for one outcome over the other, let's hope that the rain holds off tomorrow night in Tuscaloosa.