FROM THE VAULT: Alabama vs Duke — A Historical Retrospective

These two teams are improbably, historically bound together

Share All sharing options for: FROM THE VAULT: Alabama vs Duke — A Historical Retrospective

Ed. Note: This article was originally published in 2010, another labor of historical love by the inestimable Kleph. It was composed on Vox’s old CSS editor, however. Some web elements, not to mention HTML versions, have changed vastly in that time. It is therefore best viewed on your desktop, or by requesting the desktop version from your mobile browser. We’ve also opened the comments back up for this one. Again, thanks, CJ. Enjoy, Erik. 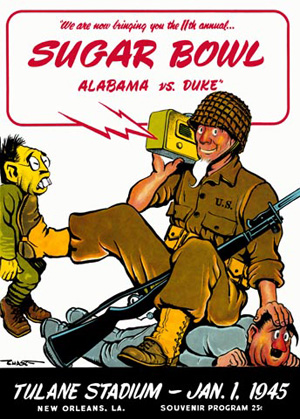 In the spring of 1930, Alabama football was flying high following a pair of Rose Bowls and subsequent national championships. Then came a devastating piece of news, the coach that led them to the peak of college football, Wallace Wade, announced that he was leaving.

Coach Wade had accepted an offer to lead the football team at Duke University but agreed to remain at The Capstone until after the 1930 season was complete. 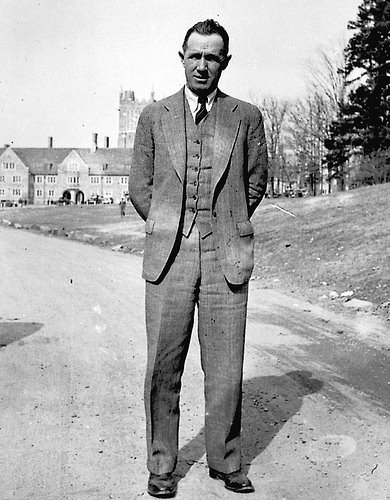 To ease the transition Coach Wade helped the University of Alabama with the hiring of his successor, a little-known assistant at the University of Georgia, Frank Thomas. Thomas was brought on Wade's staff for the 1930 campaign that saw the Crimson Tide roll to an undefeated season, a Rose Bowl victory over Washington State and the program's third national championship.

Coach Wade left Alabama with a 61-13-3 record, four conference championships and three national titles. His .812 winning percentage would be matched only by his immediate successor and only eclipsed by Paul W. Bryant.

At Duke he would coach from 1931 through 1950, earn a 110-49-7 record and bring six conference titles to Durham and, eventually, have the school's football stadium named in his honor. Yet, the one time his former team matched up against his squad during that span, he was not at the helm.

With the outbreak of World War II, Coach Wade volunteered for active duty. He would eventually rise to the rank of Lieutenant Colonel with the 272nd Field Artillery Battalion taking part in the Allied invasion of Normandy as well as the Battle of the Bulge. He returned to Duke in 1946.

Early in his service he was asked to coach the All-Army Western team. Tennessee's coach, General Robert Neyland was the coach of the Eastern squad. Both units played a series of games against pro clubs during 1942 that helped raise money for the Army Relief Fund.

During Wade's absence, Duke was led by his assistant Eddie Cameron whose success creating the Blue Devil Basketball program overshadows his formidable 25-11-1 record as coach of the football team in Coach Wade's absence.

In 1944, Cameron's roster was made up of veterans and Navy trainees who started out rough, dropping four straight games against what was believed to be the toughest schedule in the nation.

Interestingly, one of the teams that beat Duke that season was the squad from the North Carolina Navy Preflight School based down the road in Chapel Hill, NC. The Coudbusters felled the Blue Devils 13-6 in Durham on Oct. 7 to garner the No. 2 ranking in the country. The airmen were led by Paul W. Bryant and the game was technically his first as a head coach.

Sportswriters were impressed by the Blue Devils' improvement over the season and the squad was ranked 11th in the nation and invited to the Sugar Bowl in New Orleans, Louisiana. Their opponent had already been selected, the Crimson Tide of Alabama and from the start Duke was favored to win the contest.

In 1944, Alabama was building a team from scratch after disbanding football the year prior due to the war effort. The players Coach Thomas assembled were 17-year-olds and students declared unstable for military service. Coach Thomas called them his "War Babies" but knew the squad had some weapons in its arsenal. A dynamic 18-year-old quarterback named Harry Gilmer fueled a potent offense and Vaughan Mancha was the powerful hitting center that anchored the defense.

Alabama earned a 5-1-2 record over the course of the season and earned the school's first invitation to the Sugar Bowl. And it turned out to be a classic. In his history of the Sugar Bowl, former Times-Picayune reporter Marty Mule, described the 1945 contest as "a game of contrasting styles, a game that changed hands four times, and a game that was in doubt until the last second. Literally."

Duke scored first but Alabama responded with a 66-yard scoring drive that stayed on the ground the whole way. It was an oddity for the afternoon since the Tide's Gilmer took to the air with a vengeance after that.

Gilmer’s trademark was a distinctive leaping throw where he would jump two or three feet in the air and hurl the ball downfield over the heads of the incoming tackler. Despite the unorthodox throwing style, he was deadly accurate in his delivery. By the time the final whistle sounded he had gained 142 yards in the air completing every one of the eight passes he attempted.

Gilmer was also a dervish on defense, making the tackle on the Blue Devil ball carrier after every Duke kickoff during the game. 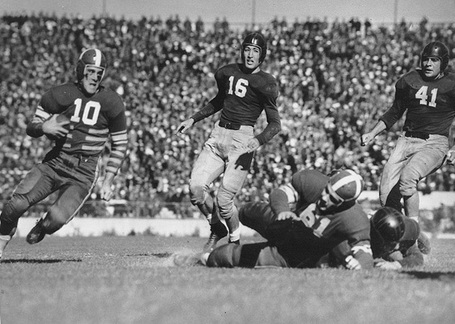 Over the course of the afternoon the lead would change no less than four times. Every time Duke would pound out a score, Gilmer would respond with his unique passing style to match it. The 336 yards produced by Duke's power running combo of Tom Davis and George Clark eventually proved too much for the Crimson Tide.

Alabama trailed 19-20 at the start of the fourth quarter but a Hugo Morrow snagged an interception and ran it 75 yards for a touchdown and the lead. In the next drive Duke battled to the Alabama one yard line when the Crimson Tide defense stiffened and stopped them.

Coach Thomas then took a gamble. Instead of launching a long drive he had Gilmer score an intentional safety giving the Blue Devils two points and narrowed the Alabama lead to 26-22. The kickoff (actually a punt) from the 20 went only 40 yards and Duke returned it to the Alabama 40 yard line. With two more runs from the punishing Blue Devil ground attack the score stood at 29-26.

Still, with about a minute left on the clock, the Crimson Tide kept fighting. On the final play of the game, Gilmer fired a 33-yard pass to Ralph Jones who snagged it at the Duke 30. Jones made it more six yards before the last defender between him and the goal line, Duke Safety Gordon Carver, dragged him down by one foot. The final score stood at 29-26.

At the same time in the Duke locker room, Blue Devil captain Gordon Carver was sighing, "I sure was glad to hear that final whistle," Carver said after the game.

Gilmer would go on to be one the the greatest players in Alabama history. In his career at Alabama he passed for 2,894 yards and 26 touchdowns (rushing 1,673 yards and 24 touchdowns). His career 54 touchdowns stood as a Crimson Tide record for more than six decades.