Alabama vs Arkansas: A Historical Retrospective

Share All sharing options for: Alabama vs Arkansas: A Historical Retrospective 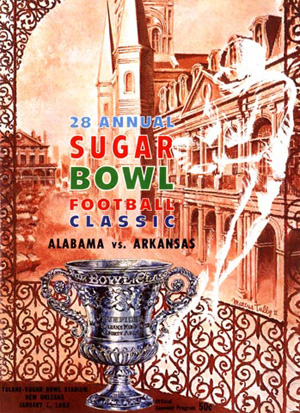 Alabama and Arkansas are odd rivals, teams whose respective conference affiliations kept them for meeting on the gridiron for most of their long histories but who have met on an annual basis since the expansion of the SEC in 1992 made them divisional foes.

It’s a rivalry without a backstory except for two memorable games played for the highest stakes -- the 1962 and 1980 Sugar Bowls. Winning that first gave the Crimson Tide its first national title under Coach Paul W. Bryant and winning the second earned Alabama its last under his tenure.

The 1962 Sugar Bowll matched Coach Bryant against the Razorbacks’ own legendary head coach, Frank Broyles (who Alabama fans will also recognize for his color commentary work for ABC broadcast of the 1979 Sugar Bowl).

Alabama rolled undefeated into New Orleans’ Tulane Stadium with one of the most successful defenses the program had ever seen. The Tide had given up a total of 22 points over ten games prompting Coach Bryant to quip, "they played like it was a sin to give up a point." 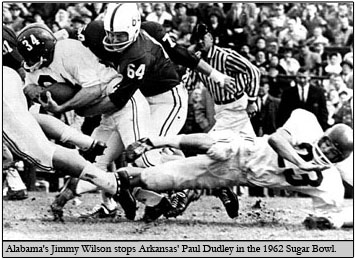 Alabama had been named the champions prior to the contest and were favored against the two-loss Hogs who were the Southwest Conference co-champions that season. Despite the differing perceptions of the two teams the game turned into a defensive battle.

The Crimson Tide took six plays to score their first touchdown which turned out to be the difference as both squads could only eke out a single field goal after that. The final score was 10-3 and Coach Bryant confessed to having "had nine heart attacks out there" due to the intensity of the contest.

"We knew when we went into the game that we were going to have trouble grinding out yardage against this team." Broyles said after the game. "But, we never thought it would be this hard."

Just less than two decades later, the two teams met again in the Superdome under dramatically different circumstances. Alabama – the defending national champions - were ranked No. 2 in the land and Arkansas was No. 6 as the pair squared off in the 1980 Sugar Bowl.

Alabama had blasted its way through the regular season undefeated but 1979 had proved to be tumultuous for the Razorbacks who came into New Orleans with a 10-2 record. The Hogs had upended then No. 2 Texas in Little Rock but then saw the SWC title escape them when they fell to No. 6 Houston in Fayetteville. Redemption was not in the cards for Arkansas on New Year’s Day 1980.

The Crimson Tide blasted the Razorbacks 24-9 behind a powerful running attack that earned Bama back Major Ogilve the Sugar Bowl MVP. With previously unbeaten and untied No. 1 Ohio State falling to the USC Trojans in the Rose Bowl earlier in the day, Alabama earned its 11th national championship.

After the Sugar Bowl victory, Alabama defensive lineman Byron Braggs famously quipped: "The only feeling better than playing for the national title in New Orleans on January 1 is being in Tuscaloosa on January 2 to celebrate winning it."

Between the two legendary meetings stood one highly controversial one that didn’t transpire. After the end of the 1964 regular season the undefeated Crimson Tide were tapped as national champion by both the Associated Press and UPI "coaches poll" ahead of also-undefeated No. 2 Arkansas.

But Alabama was upended by No. 5 Texas in the Orange Bowl - a team Arkansas had bested during the season. (Arkansas topped No. 7 Nebraska in the Cotton Bowl) Since there were no further polls, Alabama retained the national championship.

The Football Writers of America in a post-bowl recognized the Razorbacks as the national champion in their separate post bowl award, The Grantland Rice trophy. Due to the controversy, the AP began the practice of selecting its national champion after the bowl games the following season.

Ironically, the first "regular season" game between the teams also had championship implications as the razorback defeat was part of Alabama’s undefeated run through 1992 which earned the Crimson Tide a berth in the Sugar Bowl against No. 1 Miami.