Consider this the week that could have been in the world of meltdown time. So many otherwise great meltdowns just didn't quite come to fruition. Virginia Tech rallied to beat East Carolina, Auburn held off Clemson in overtime, Oklahoma squeaked by Air Force, and Michigan survived a late scare from UMass. Both Tennessee and Notre Dame gave their new coaches mulligans for their losses in rivalry games. Heartache, I know.

Fortunately, Georgia did choke late to Arkansas to start off the season 0-2 in conference play, and Ole Miss somehow managed to get thumped by a team that most didn't even think could get three wins on the year. The reactions were largely as you would expect. Many who support the Dawgs wanted various coaching staff members burned at the stake, and while I obviously wasn't around the day they drove ol' Dixie down, the reaction from many Ole Miss fans is about like I would expect to hear circa April of 1865.

Even with the small sample size, we've got lots of great stuff this week. The topic list is all over the board, as usual. We've got more watermelons, the return of Ray Goff, Valiums, tampons, the Titanic, parole violations, turkey inseminators, and the obligatory pop-in from Jon Gruden. One guy even renounces his fandom. It's must-read material.

The usual language warning definitely applies this week. It may even be NSFW. Consider yourselves warned. Enjoy below the jump: 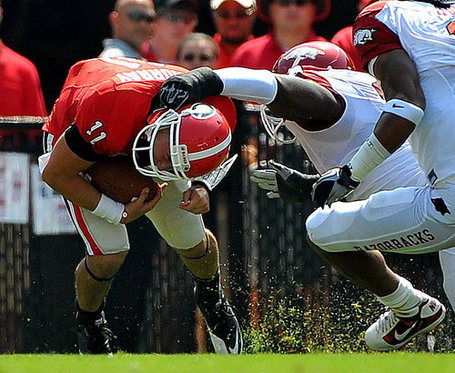 Richt would rather take his "boys" swimming and watermelon eating than win a fucking football game. Thank you senior tan.

Ray Goff is back roaming the sidelines. This coaching staff and S&C program are clueless. fucking fire them all.

don't worry. st. mark I the pious will have everything figured out by the papa johns bowl

Maybe we could bring in Sandra Bullock to talk to our offensive line like she did in that movie. You know, explain it to them.

We are turning into Florida State

Can't wait to go to StarkVegas next weekend. Get to see two of the crappiest teams in the SEC.

It used to mean something to beat Georgia. Not anymore. Only the techies really care about beating us.

It's not just that teams aren't intimidated at all by us... But they apparently DROOL to get on the field to play us.

It's mid-September and the season is already over. Fuck, that was quick.

No two ways about it, we have the worst coaching staff in the country.

FIRE RICHT! I DON'T CARE HOW YOU DO IT... JUST GET HIM THE FUCK OUT OF ATHENS!

At last yall realize that being FSU North is not cool. That Valium Boy is not an offensive genius and developer of quarterbacks. That recruiting tweeners and "athletes" doesn't open holes or make tackles. That making projects out of thugs doesn't beat SEC teams.

If Richt allows Bobo to walk out on the practice field to even coach the quarterbacks and or lets him see the sidelines or coaches box during a game ever again, RICHT SHOULD BE FIRED FOR INSUBORDINATION TO THE UNIVERSITY OF GEORGIA AND ITS FANS!!!

I'm out of fucking Titanic puns but you get the idea

I'd rather have a losing season than a mediocre one. A mediocre one gets that douche face another year.

That's it, I'm done for this season. I have an ass load on my plate right now between my job, grad school, and the regular shit of day to day life to waste my time with this shit. 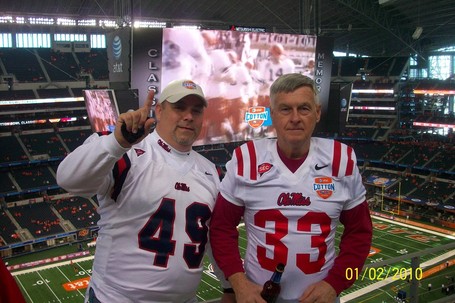 BREAKING NEWS Ole Miss names new mascot: The "Fighting Tampon" – good for only one period and has no second string.

My approach for the remainder of the year is to not give a flying fuck. I’ll be in the Grove. I’ll go to the stadium. I’ll cheer. But, I don’t give a fuck and refuse to let this piss me off anymore. It’s fucking pointless.

And, now that this shitstorm is over, it’s time for operation "dodge phone calls and text messages from Friday night’s/Saturday morning’s huge fucking mistake.

No, I do not want to go to a late lunch and watch "Eat, Pray Love" at the goddamn matinee.

Never thought I'd say this but we just got our asses handed to us by a turkey fucker.

Houston Nutt has brought this program down to a new all time low. Not even Ed Orgeron lost to Vandy at home and to an FCS team.

This jackweed was a EFFING REAL ESTATE SALESMAN IN OKLAHOMA FOR THE LAST TWO YEARS. Please tell me how that qualifies ANYONE to run an SEC OFFENSE!!!!!!

This is a crisis. I wish I could fly the flag upside down to show panic, but we cant even do that........

Sitting home in December is the least of our problems. This team may not win a SEC game

Egg Bowl may be to see who wins 1 SEC game.

LSU winning was the the cherry on this shit sundae of a college football weekend.

The game is a backdrop for the Grove, sad but true. Priorities are all wrong at OM.  It is about SHOWING OFF and trying to be all Aristocratic!

Do we still wonder why Vandy considers us a win every year?

when we use to suck i had fdwl, col reb, and other things that made me want to pay my hard earned money to go to oxford... i just dont reconize who this school or team is?  WE HAVE SOLD OUR SOULS!!!!! and now the ole miss big wigs are going to to pay for their pc bull...

Saw 20+ kids lined up after the game to get pictures made with Col. Reb and heard I'll Fly Away until I almost puked.

I have never seen a more horrible coaching job in my 34 years... FUCK US!!!

I live in Oxford and won't be back

Today, I missed Orgeron... seriously. at least his teams waited until about halfway thru the season to play like they were beaten and broken, this team quit at halftime of the first fucking game of the year.

One more thing that pisses me off is that not one time since Nutt got here has he put the loss on the coaches. That shit is on you, asshole. Man the fuck up.

If sucking dick was a crime, Masoli just violated his parole!

I hereby renounce my fandom. Fuck you if you think this is weak. I don't care. I refuse to get caught up in any game or race involving Ole Miss athletics ever again. I don't give a fuck what happens after this. It doesn't matter. We are dipped in shit. I have wasted too much of my life trying to wish these fucking assclowns into success. I don't give a shit. Win. Lose. Kiss my ass. I might go to the games so that I have someone to drink with, but I no longer care. Fuck you. Fuck you, Bradley Sowell. Fuck you, Masoli. Fuck you, defense (what is that?). If you all die, I won't cry. Jesus what an embarrassment. Never again, assholes. I refuse to let myself get caught up in this self depreciating BULL shit. If Ole Miss ever wins a game again, I don't care. Fuck you. I might enjoy that Alabama loses here and there, but it won't really mean anything to me. You motherfuckers just keep stabbing me in the back. See if I care. I don't. Bring it on. I don't give a shit. Fuck all of you. I am bitter. We all deserve better. Have some fucking respect for yourselves. 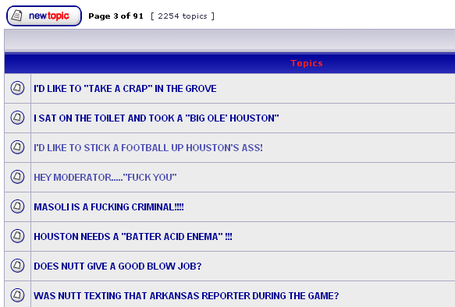