I know we make more than our fair share of Texas jokes around here -- we wouldn't had Colt McCoy not been hurt -- but you've got to give the 'Horn fans credit, they know how to meltdown with the best of 'em. During our own meltdown regarding our first half defecation of the bed in Fayetteville, I noticed that Texas was getting hammered and to that end I expected a good meltdown, but even so I still have to tip the proverbial houndstooth fedora in the general direction of Austin, Texas.

Joining Texas this week in meltdown time are Georgia and South Carolina. At some point I figure that the losses will set in for good with UGA and the meltdowns will mellow out, but thankfully that point is apparently still a few weeks off. And for South Carolina, well, for some irrational reason they were apparently holding out hope that their early 3-0 start wasn't just a smoke show. Don't know why, really, but for meltdown purposes I'm glad they were deluding themselves.

The topic list this week is a bit random, but nevertheless all-encompassing. We've got paper sacks, Siberian prisons, stabbings, war with Belgium, holidays in Birmingham, Girl Scouts, cancer, Ray Goof, John Mackovic, varmint, testicular shaving, and in place of Jon Gruden we get an appearance this week from Mike Leach. It's good stuff.

As always, the language gets very bad at times. Very bad this week in particular, especially from the Longhorns. It's safe to say that the meltdown thread this week is NSFW. Consider yourselves warned. Enjoy after the jump: 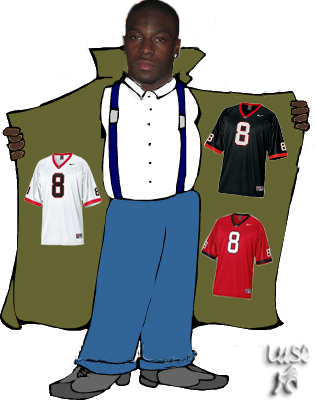 Get your paper sacks here!!!

I hope Richt is sent to a Siberian work prison where he is forced to dig ditches 9 hours a day and eat only pubes.

We just lost to Mississippi State. That is like losing a war to Belgium. We have become a slump buster.

I hope one of our unruley thugs fucking stabs Bobo's ass in film session.

That line will make it to the meltdown page!

If St. Mary's school for the deaf and blind can beat this team, then you best believe GT can.

Welcome back Goof. We missed you.

We haven't lead a football game in 12 quarters. Maybe they'll let us play Ole Miss after the season is over to find the true cellar dwellar in the SEC.

Dude, we won a national championship exactly 30 years ago. Are you fucking 12?

I honestly can't decide whether I'm more embarrassed by this team or just disappointed.

Now I know how Vandy feels

Hell with this offensive line we couldn't run it between the tackles with 4 men in the box.

Can the next arrest please be Richt?

Deal with it folks, we're Tennessee circa 2005, and exactly how far down the shitter we swirl will be directly proportionate to how long it takes the powers that be to figure that out. 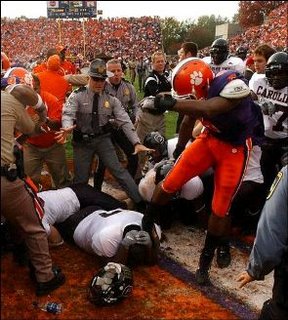 It was one of the worst decisions I’ve ever seen by a quarterback ever in the history of football since the beginning of time … ever.

I think Spurrier would rather be playing golf anyway

For 118 years USC has failed to become a national contender. I honestly don't think anyone can get us to the top.

Our DT sets a school bench press record of 445 pounds. That Alabama tailback Richardson benches 475. And you guys really wonder why we always get manhandled in the trenches?

Mail in the 2010 USC football season, it's over

Spurrier is 19-23 in SEC games here. You are what your record says you are.

2007 all over again... bench the senior for the latest savior freshman... then watch the season fall apart

So, were a baseball school now?

How long 'til baseball starts?

We're basically Vandy with  more money and a bigger fan base

Why do I feel like an Ole Miss fan?

What travel site has the best deals to Birmingham? 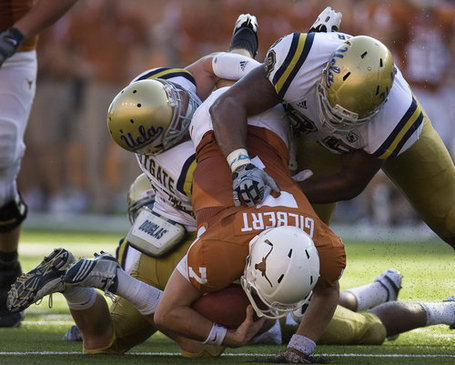 Fuck rebuilding. No offense, but rebuilding is for shitty programs like A&M. We’re fucking TX and we pay our head coach $4mm dollars and our assistants $1MMM dollars to deliver…every year.

Too bad we're not as good at football as we are conference expansion.

It took a transcendental player, a once in a lifetime player, for Texas to win in spite of its coaching. I actually feel bad for muschamp. What's gotta be going through his head? You call this an offense??? Shit o-line, shit rb's, wr's who drop shit tons of balls, and a new qb who actually looks like he's more overrated and shittier than Simms. I'd be out too if I were muschamp

This isn't a knee jerk reaction to today's game. Mack Brown's great at recruiting, great at fund-raising, and great at a managerial level, but, my oh my, he's a fraud of a coach.

We are getting GASHED, down our fucking throats in our own park......right up the middle!

just hand the keys over mack if you can't fucking kill davis by now. shit or get off the fucking pot

we don't look like we should be a ranked football team right now at all.....in any phase of the game.

Our entire offensive staff is a fucking cancer. From the OC all the way down to the grad. assistants.

Buncha bitches. Spare me the 'new system', 'young players' bullshit. Even with new players/system, you can see signs, even if the executions it not there. These muthafuckas don't execute or even have a scheme. All this speed and talent, yet we can't until score a td til garbage time. WTF?

If there's one Big 12 team that can match Texas's underwhelmingness, it's those fuckers. Wouldn't surprise me to see Texas win in Dallas again, thus confirming that the Big 12 does indeed suck fucking balls.

I want to punch someone in the throat

Anybody want my OU tickets?

Gilbert is in full pussy mode

they don't want OU to get our extra point play on film.

Nebraska will skull fuck this team

Lots of teams will skullfuck us.

God dammit this is the last fucking thing I needed

Greg Davis can suck my dick

He would probably bite the tip on accident.
That fat fuck could ruin a wet dream.

Those coaches need to be sent pink slips for stealing money from our university.

Anybody trying to put a positive spin on this should be banned immediately.

The BXII looks to be a big steaming pile of shit this year. I haven't been that impressed w/ one single conference team. That being said, I still don't think Texas has a good shot at winning it.

It sad a team that is running the ball every play is has a more innovative offense than ours.

Oh jesus. They are going to buttfuck this clock to bolivia.

We're paying for years of sins in recruiting evaluation and bad coaches who have been around way too long. Without a QB among te best in CFB history we're a 9-3 team.

What I saw today was the worst performance by a Texas team I have seen in a long time. It worries me thatthis may truly be the end of our run and we are headed for some down years ala the 80s.

If you think things suck now, then fast forward a year

I can't believe I shaved my balls for this.