As we saw in last week's Alabama Record Breaking Watch, Mark Ingram had no issue at all returning to his Heisman form (151 yards on nine carries and 2 TDs) despite having surgery a few weeks earlier. An ACC doormat defense is one thing, an SEC defense is quite another though, so the question for Week 4 was could Ingram repeat the success of his earlier outing against the Razorbacks in a hostile environment in a game against the #10 team in the country?

Needless to say, the answer was a resounding "yes." Though Ingram didn't have an eye-popping 15+ yards per carry average in Fayetteville like he did in Durham, he still turned in a heck of a performance: 157 yards on 24 carries (6.5 ypc) and 2 TDs. Ingram needed 103 yards and 1.1 TDs to be on pace to break the all time rushing yardage and rushing TD records before the game and he obviously well exceeded the minimum needed in both categories. Even if you were to remove the outlier run of 54 yards, he still met the 103 yards needed for pacing on the nose. 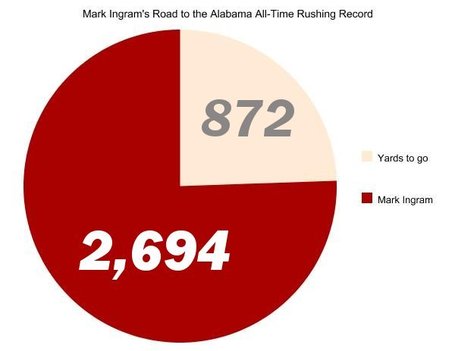 Last Saturday's outing now puts Ingram 872 yards away from breaking Shaun Alexander's rushing yardage record and pushes Ingram up to #5 on the all time list passing Bobby Marlow and Dennis Riddle. #22's first two outings of the year have been so stellar that he's now dropped the average needed to 96.8 yards per game (the average needed has dropped 20 yards after two games.) Breaking the yardage record is still not a cakewalk by any measure, but certainly attainable for a back of Ingram's stature. 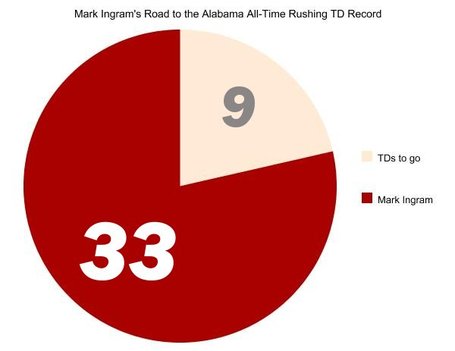