Alabama vs Florida: A Historical Retrospective

Share All sharing options for: Alabama vs Florida: A Historical Retrospective 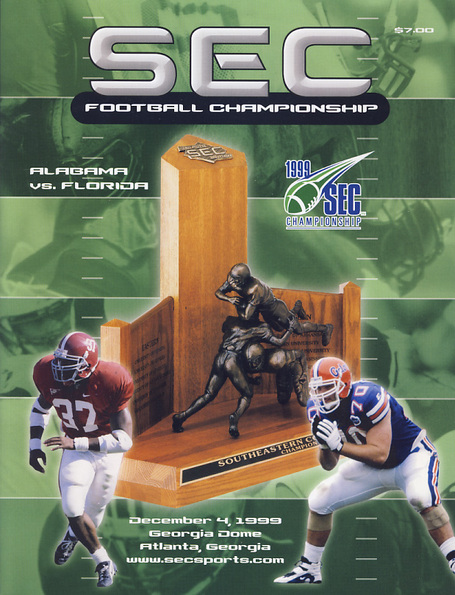 Alabama and Florida have been facing off against each other on the football field for 94 years but the overall number of these matchups is relatively minuscule compared to other long time SEC teams. The Crimson Tide and the Gators have met 35 times with Alabama coming away victorious on 21 occasions.

The rivalry between the two teams has largely been defined by the conferences they shared. Alabama became part of the Southern Intercollegiate Athletic Association in 1895 but Florida didn't join until 1910, delaying a matchup in a time long road trips made many away games impossible.

The two teams met twice as members of the association. The first on Oct. 21, 1916 when Alabama under head coach Thomas Kelly traveled to Gainesville and walloped the Gators 16-0. Running back Cecil Creen was the star of the show as Florida seemed unable to stop him on offense.

Florida returned the favor on Nov. 11, 1921 when they came to Tuscaloosa for Alabama's homecoming and upset the Xen Scott-led Tide 9-2. The formidable leg of the Gators' Arc Newton made the difference in the contest as his kicks put points on the board and his punts kept the Tide pinned all afternoon. Alabama's only score, came on a safety after blocking one of his punts.

In 1921, Alabama and seven other schools left the SIAA over a dispute concerning playing freshmen athletes and formed the Southern Conference. Florida joined the new association a year later and thus began a regular series between the two school. Over the next decade they would meet six times with Alabama earning a 4-2-0 record against the Sunshine State saurians (interestingly, the Tide held the Gators scoreless in every victory over that span).

In 1933, thirteen of the conference's 23 schools -- including Alabama and Florida -- split away and formed the Southeastern Conference. The SEC was set up so that each school played six conference games -- five against permanent opponents and a sixth game rotated between the other four members. 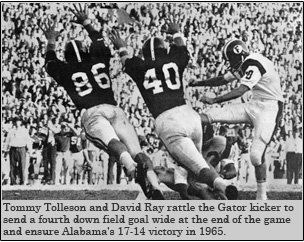 As a result, Alabama and Florida saw less of each other than they had during the late 1920 but were not forgotten on each others roster. Over the next six decades, the two teams met sixteen times with the Tide rolling up a 11-5 record including a streak of eight straight wins between 1964 and 1986.

The expansion of the SEC in the early 1990s and the onset of the two-division arrangement and the conference championship is what truly fueled the rivalry. Under Gene Stallings, Alabama came to dominate the new Western Division and Steve Spurrier's Florida squads ran amuck in the East Division.

Over the next decade the two teams met only twice in the regular season but faced off no less than five times in the SEC Championship Game. Alabama mustered a 3-4 record over those games, winning the SECCG on two occasions.

The ascendance of both teams in recent years allied with the rotating SEC divisional schedule have allowed Alabama and Florida to become regular foes since 2005. In the past five years the teams have met four times with the Crimson Tide earning a 2-2 record over that span.

Note: There is a discrepancy between the Alabama and Florida records. Alabama's record book and media guide lists the first meeting between the two teams as Oct. 3, 1904. Which is a problem since Florida didn't field a football squad until 1906. According to the UA history book the 1904 game was against Florida State.