Week one brought most programs cupcake games, which means the meltdown material for this week is a bit light. Fortunately, though, Ole Miss somehow, someway, threw away an 18-point lead to Division 1-AA Jacksonville State, and the reaction was every bit as good as you would expect. You can't say ol' Johnny Reb didn't come through in the clutch for us.

And, yet, they weren't even the biggest meltdown of the week. That honor went to LSU, who narrowly squeaked by a decimated North Carolina team in Atlanta. Some said it felt like a loss afterward, and, well, the meltdown was certainly like it was a loss.

You know the standard warning on the language, it gets rough. Fair warning. Blame yourself. Enjoy the meltdowns after the jump: 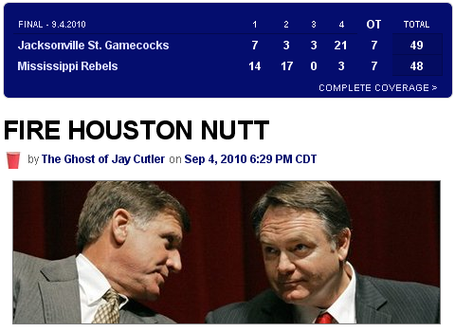 Hell yes this is a knee jerk reaction. And hell yes, I'm drunk. I don't care. Fire Houston Nutt. Fire Tyrone Nix. Strip all of our defenders of their scholarships. If they're not willing to at least pretend like they're in the SEC, then fuck 'em. Fuck 'em hard.

seriously it is time for Nutt to go. he embarrassed the university in ways that even the shrimpboatfuckingcaptainkangarfuckingroo did not. pathetic

Nothing makes up for this. If we were 11-1, people would still say "Yea but you lost to Jacksonville State". We’re royally fucked. 2011?

Well now that is over can concentrate on basketball season. every other team we play is better than jacksonville state. we might be lucky if we are allowed to stay in the SEC after this one. Fire the whole goddamn lot of them, the only way to save face after that bullshit of a game is to just hit the reset button on our football program.

I have to go back to work Tuesday (I work at State, remember?). Which would be bad enough, if I didn’t have to go to the in-laws for lunch tomorrow, with my obnoxious State grad sister-in-law who will take great pleasure in rubbing it in my face.

If I don’t post after tonight, you will know it’s because I murdered my sister-in-law and am sitting in lock-up.*

Ouch. That shit will not buff out.

well, we just created a legend on the j-state campus.

Will this season ever end?

We will be the laughing stock of every sports show in the nation this week!!

IS THIS A MOTHERFUCKIN GODDAMN JOKE

Looks like we’re gonna have to depend on schadenfreude this year. I can’t believe I’ve got to worry about getting beat by Tulane.

I just got rip-roaring drunk at my non-drinking parents’ house, then turned around the second they completed that touchdown pass, walked out the door (slammed it really hard), got in my car and drove to my house. Mom called me freaking out. I did not give a shit.

I've been in school/not at home for 7 years. This was the first "let's get the family together to watch game." Apparently my parents didn’t understand the level of anger that results from FUCKING LOSING TO FUCKING JACKSONVILLE STATE. I mean, FUCK!

This is looking forward to Christmas all year and Christmas morning you wake up to a bloody, hacked up, shot-up pile of reindeer corpses and a wrecked sleigh, and just as you open your door to examine this horror further, Santa pops out from under the wreckage, says "fuck you, you don’t get any presents!" and blows his own head off.

I don’t think I’ve ever felt worse about our chances, even during the Orgeron years. At least Eddie O could fucking beat his cupcakes.

On the bright side: I’ll get to stay home for New Year’s this year.

any one kicking the dog or beating the wife yet?

I work with AR fans. I don't know if I'm going back to work.

Most embarrassing loss in the history of Ole Miss football.

Worse than any Orgeron loss by far. 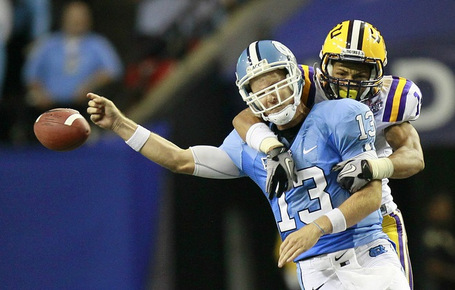 I hate Jordan Jefferson more than my Ex-wife. :doublebird:

this could be the worst coached, worst played game in LSU history.

Miles is making LSU the laughing stock of Tuscaloosa.

Can I get 4 mil to destroy the hopes of an entire state and fan base?

Why do only LSU players cramp?

Houston Nutt is in good company....

Bottom line
Its embarrassing to be an LSU fan

Resign tomorrow please. This from a miles supporter until tonight. I think hallman could win 9 games with this talent. Yes I said it. Anyone with a brain knows what's coming on both offense and defense.

Les is blaming ALL of this on his players. Listening to him on the post game. It is really unbelievable.

this season is totally fricked. frick the coaching staff. just pathetic. we are a complete joke right now

Most disgusting win ever. These coaches really need to step it up. Going to be a long season.

Mullen will shred our defense. We WILL lose that game if this game is any indication.

TJ Yates just threw for over 400 yards against us

But the TigerRag, the advocate, and everybody else keeps telling me how good our secondary is. Total BS

Even trade Less for RichRod

UNC had 20 first downs, LSU had 11. It doesn't look like we will crack the top 100 in total offense this year as hoped. :banghead:

Reservations for Shreveport anyone? I see the Independence Bowl calling.

only les can almost over shadow an ole miss fail

As a alumni its sad to say but I am officially done with LSU football till they get rid of that sorry arse OC and bench that dumb arse QB. Both are completely worthless.

Sad to say it, but same here. This team is heartless. RIP LSU as top tier team, hello mediocrity.

Miles is the luckiest sum bitch on the planet. Period.

Sitting here still shaking my head and still it's like.......where do you start. I'm at a loss for words.

He lost me tonight.

How naive can some of you actually be?

His days are clearly numbered. Not much about this team looks stable.

What a sad state of affairs: A loss for Les would actually be a win for the program, if it mean he goes.

When you walk away from a victory feeling like it's a defeat, it wasn't a very good game.

Miles is officially lumped into the denardo category.

How can we collect money to buy out his contract?  Can we start a web site?

If you took away anything from this game other than LSU has some of the most explosive offensive weapons in the nation that they have absolutely no idea how to use, then I have nothing to offer you.

No, LSU did not win, they just didn't lose or survived... another couple of seconds on the clock and Les would have resigned on Sunday.

You are seriously okay with this? You must shit rainbows.