A Few Thoughts on Tonight's Game

Share All sharing options for: A Few Thoughts on Tonight's Game

After Auburn absolutely curb stomped South Carolina in the SEC Championship game (how on earth the Gamecocks beat us, I'll never understand), we've been faced with the rather disgusting prospect of Auburn winning a national title. To put it mildly, that's not a terribly attractive way to kick off 2011 for the Crimson Tide faithful. Upon coming to grips with the fact that Auburn was even in the game, much less knowing that they'll probably win it, I've been kicking around quite a few ideas of how to address my feelings on this contest to you, the RBR reader. For a while, I was working on spilling some serious vitriol, but then I thought, "I hate Auburn 365 days a year, I'm not going to be able to say anything I haven't already said," but then it dawned on me that that wasn't entirely true.

For those of us that live in Alabama, the last month has been pretty insufferable. It's been a 24-7 (or 24-8 as Cam likes to say) gush fest over Cam and the Teagles. Make no mistake, there was certainly no shortage of coverage of our trip to Pasadena last year, but all of the "once in a lifetime" stuff that's going along with the Barn's trip to Glendale has just pushed it over the edge for me. After listening to some sports talk radio, at one point last week, I sent the following text to RJYHyall, "If I hear the phrases 'Auburn family'  or 'all in' one more time, I'm going to rip my stereo out of the dashboard with my bare hands," (she suggested I run with that impulse for what it's worth.)

I would doubtless be disgusted any time Auburn was in the national championship game, but I've finally figured out what it is that's sending my irritation level to DEFCON 1 on this one and it's the fact that this is coming on the heels of our dream season. We waited 17 years for another championship and some of those years were incredibly grim. We finally got a Heisman winner, we have a coach that's a legend in his own time and we finally got the Texas monkey off of our backs. I'm telling you, I've been on cloud 9 for a year and there's no hyperbole in that. I can think of days where things were going kind of crappily and I'd think back to Trent busting off that 50 yard TD run or to the Dareus spin move TD or to Ingram holding his "A" gloves up for the camera or sliding on his knees in victory and I'd be taken to a happier place. Thoughts of those plays made the happy days happier and and the difficult days a bit lighter.

Don't get me wrong, an Auburn victory tonight won't dampen those memories one bit, but the prospect of boogs hoisting crystal also made me remember that being a sports fan is an exercise is masochism and schaedenfreude. Your team isn't going to win it all most years, so when they do lose, you also take pleasure in the misfortune of your rivals. Tell me with a straight face that you haven't enjoyed watching Tennessee absolutely fall to pieces over the last couple of years? Oh, that's right, you can't, because you've loved every nanosecond of it because it is the good, right and true thing to do. So yeah, I'm irritated that if Auburn wins, it'll take away our ability to lord their failures over them for the near future. All of the mocking about 1993 and 2004 will be out the window. The "5-19 Gene" jokes are pretty much over with and I don't want to see that other stuff go by the wayside.

And that brings me to this: Alabama fans that are cheering for Auburn tonight. How do you do it? Don't you feel dirty? It goes against the natural order of the universe as Deadspin rightly pointed out. This reminds me of a conversation I once had with a good friend from Costa Rica who was flabbergasted by the whole "fan of the conference" mentality so prevalent across the South. In the incredibly intense rivalry between soccer teams Saprissa and L.D. Alajuelense (LDA) that dominates the capital city of San Jose, my friend, an LDA fan had this to say about Saprissa,

See, he gets it. Why wish success for your rivals? Do you hate your own team? Do you want to see your enemy get better recruits and more money? If the answer is yes, you might actually be an Auburn fan and should look into turning in your Bama fan card posthaste. "The enemy of my enemy is my friend" is a pretty crappy foreign policy strategy, but as far as I'm concerned, it's the gold standard in the world of college football. Remember this:

WE ARE ALL DUCKS TONIGHT.

I'll close with this: In 2006, I posted the following image to RBR: 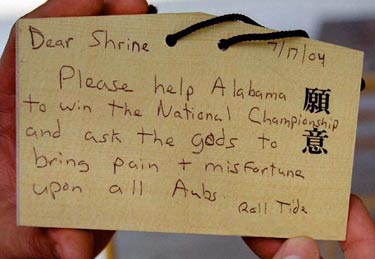 This photo was taken at the Meiji Shrine, a Shinto shrine in the Shibuya neighborhood of Tokyo in 2004 by an Alabama fan on vacation. The little wooden card or plaque is called an ema and the Shinto faithful write prayers or wishes on them. The ema will eventually be burned and it is believed that the smoke from the fires carries the prayers to heaven. It took five years for the kami to mull over the plea and grant the national championship, let's hope that in this sixth year, we'll be able to cash in on the "pain + misfortune upon all Aubs."