Since we expounded upon the recruiting mysteries down in Thibodaux a couple of weeks back and all of the subsequent inconsistencies surrounding Sean Nelson and the representations that he made on the record to Thayer Evans, in the interest of equality let us now turn attention to north to the equally interesting recruiting mysteries in sleepy Springdale, Arkansas involving a man by the name of Walt Williams.

Most RBR readers likely know the back story by now, but for those unaware I'll recount by saying that Walt Williams is a man in his early 30's who runs (well, ran) an Arkansas-based company promoting the services of prep athletes to college programs. Williams is a self-proclaimed diehard Razorback fan and native of northwest Arkansas who played high school football under Gus Malzahn in the late 1990's, and ended up playing some college football at Central Arkansas before later transferring to Liberty University to play for the Fighting Falwells -- I guess the siren song of those 3,000 year old dinosaur fossils was too tempting. Based on that background, a few years back he launched his business whereby rising prep prospects would pay him a sum of money up front -- generally ranging between 1,500 and 2,500 dollars -- in return for him marketing their services to college football programs in hopes of increasing their chances of earning a football scholarship.

From the outset, there were always some people suspicious of the legitimacy of his business, and it didn't take long for some bad publicity to form. Take, for example, this article on the Arkansas Rivals site from a couple of years ago:

"They had athletes from other schools working out with athletes from Shiloh Christian on their football field for a recruiting company." said Taylor "No players are going to be affected, as this is only a warning, but they need to be careful how they use their field when it involves athletes of other schools."

The company in question is Pinnacle Preps Recruiting, a recruiting service that helps promote athletes to colleges with highlight films, personal workout films, and other recruiting tools.

(Perhaps not coincidentally, one of the players allegedly involved in that violation was Kiehl Frazier, the current Auburn commitment, who transferred from West Fork to Shiloh Christian that summer.)

The real stir, though, begin back in the middle of last year. About eighteen months ago, shortly after Michael Dyer committed to Auburn, the backlash against Walt Williams and his company Pinnacle Preps begin to reach a fever pitch. The credibility of his business was openly questioned, many people wondered how prospects could pay for his services and retain their collegiate eligibility (I still haven't figured that one out, for the record), or if they didn't pay for it and received his services anyway (impermissible benefits), and you didn't have to venture far off the beaten path to find a litany of pay-for-play accusations.

Those allegations exploded further when, days after National Signing Day, the following photo surfaced of one of Walt Williams' "clients," Dakota Mosley, who had days before signed with Auburn in what many felt (and still feel) was a glorified package deal to attain the services of Dyer: 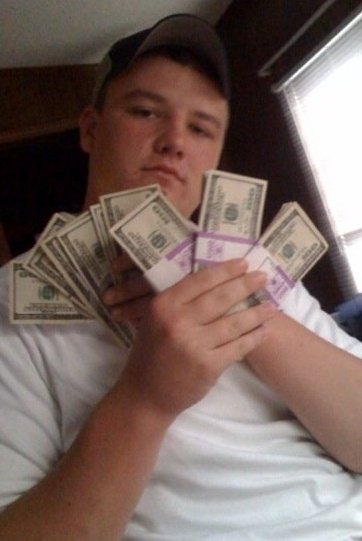 Going back to last summer, though, after the commitment of Dyer, Williams was arrogant and idiotic as ever. He not only dismissed all the aforementioned concerns, but was quite defiant in doing by threatening lawsuits and openly pondering exactly what he was going to do with all of the money he was going to win in said lawsuits. See statements such as the following:

"Walt Williams is thinking of all the things I am going to buy with the money I get from these defamation, libel and copyright suits. I am going to teach these E-thugs a lesson that clorox won't wash out."

Ol' Walt wasn't entirely kidding about those lawsuits, or at least the threat of them anyway. For example, he attempted to get the Arkansas message board WooPig shut down, claiming defamation and copyright infringement, after members of the board made disparaging posts regarding him and his business. The harshly worded letter, in relevant portion, went as follows:

"I represent J. Walt Williams, and Pinnacle Preps, Inc. It is my understanding that in the past few weeks you have allowed posts by users of your website, www.woopig.net to use my client's likeness and copyrighted material without properly moderating said website. The use of this material and the continual use of my client's name, and his company's name in a defamatory manner on your website must be controlled, and as the moderator you have a duty to remove any posts which will violate either State or Federal law.

Please be advised that any further allowance of Copyrighted or defamatory posts on your website of either my client's name, company name, or his copyrighted work will be considered a breach of your duty as moderator and will be handled accordingly. You are to cease and desist from allowing posts of this nature to remain on www.woopig.net or any other related website which you may own or moderate. You are further advised that my client will take whatever action necessary to protect himself from defamatory attacks to character or conduct, and will seek to the fullest extent of the law to uphold all copyright laws."

As you probably guessed, it seems that cease and desist demand letter was just a thinly-veiled legal intimidation tactic with no real merit. Not surprisingly, when a legitimate response was given -- pretty much debunking the defamation and copyright infringement allegations for the shams that they were  -- neither Walt Williams or his attorney ever pursued the matter any further.

Nevertheless, all those legal threats eventually became particularly amusing because there indeed was a lawsuit filed a few months later, but as it turns out Walt Williams was the defendant, not the plaintiff. In February of 2010, days after National Signing Day, one of his former "clients" filed a lawsuit in the circuit court of Washington County claiming breach of contract, fraud, and violation of the State of Arkansas' Deceptive Trade Practices Act.

Several juicy tidbits stand out in the complaint -- perhaps most noticeably that Williams was actively touting his "big" clients such as Michael Dyer -- but the general takeaway point is that Williams' company was basically every bit the scam that any person with an iota of common sense thought all along. Forget all of that high talk about "$200,000 financial rewards" and "The Dream," after getting his check for $2,500, Williams basically ignored his "client" and didn't even do any of the most simple work that he contractually obligated himself to do, whether that be his highlight DVD's, his postcard campaigns, his e-mail "blasts," personalized websites, etc.

The lawsuit has since apparently been settled out of court with a confidentiality agreement in place to keep the specific terms of the settlement from ever reaching the public sphere. Interestingly enough, though, since part of the relief that the plaintiff's sought in their lawsuit was for the court to grant a temporary injunction to, in effect, shut down Pinnacle Preps, if you try to go to the Pinnacle Preps website now, you get this message:

And the personalized website touting Michael Dyer that was up for so long --unlike the case for the Smart family, he actually made one for this "client" -- even after he had signed with Auburn last year? Good luck trying to find a working version of that. Type MichaelDyer5.com into your web browser, and you get this result:

Now, whether or not that the demise of Pinnacle Preps was due to some sort of legal agreement in the lawsuit with the Smart family or if the bad publicity just became too much -- Google "Pinnacle Preps" and nearly every link takes you to a site trashing the company and its practices -- I do not know, but fear not, Walt Williams hasn't gone away for good. In fact, he hasn't really gone anywhere. With that in mind, I direct you to ... drumroll, please ... Elite Edge Sports Promotion.

Go ahead, click the link and browse around, you probably won't get a virus -- though if you don't turn the volume down you'll have to endure the insufferable music blaring in the background. In any event, if you browse around a bit it doesn't take long to see it's the same ol' Pinnacle Preps scam with a different name. Notice they still offer the "Award-Winning Websites," the "e-mail blasts," the "highlight video production," etc. The contact page is basically still the same, though there is a new P.O. box number and a new cell phone number listed. The testimonials are literally copied-and-pasted from the old Pinnacle Preps site. The references to the old Pinnacle clients are there -- namely Kiehl Frazier -- and the example highlight videos still have the Pinnacle Preps logo plastered all over them. Basically the only difference is that Walt Williams' name and photo aren't on the site anymore, nor are the pricing guides. Aside from that, it's Pinnacle Preps 2.0. He may be trying to remove his name and likeness from it, but it's still the same old scam.

As an additional note, I also found the section of the site devoted to "Pro Athlete Web Development" -- when is Michael Dyer eligible for the NFL Draft, again? -- to be fairly interesting:

Tell me, why do I get the feeling that ol' Walt probably didn't get the express written consent of the NFL, the NFLPA, the Minnesota Vikings, Kevin Williams, or the Make-A-Wish Foundation to use their respective names, logos, and likenesses to promote his business? In any event, it's a bit odd that someone who was previously such a staunch defender of intellectual property rights would do such a thing, but I digress.

What Walt Williams does not address in his websites, whether that be the old Pinnacle Preps or the new Elite Edge, is exactly how a barely 30-year old man whose football experience is limited to mighty Central Arkansas and later Liberty University, with no coaching experience whatsoever, with no scouting experience whatsoever, and no ties to Division 1-A college football other than being someone who played high school football for Gus Malzahn, can legitimately generate interest from college programs in marginal prospects or provide legitimate value for high-end prospects whose raw talent and ability can earn them offers from nearly every program in the country based solely on their own merit? Those are still questions that he has never answered, and I suspect questions that he will never answer.

Legitimacy, lawsuits, and damaged reputation be damned, though, Walt Williams is still forging ahead, and his most heavily-recruited "clients" are still somehow spurning Arkansas and ending up in Auburn. Such are seemingly the limits of litigation and bad publicity. The name may have changed, but the scam has apparently endured.