Since it was mentioned yesterday in the comments that Pinnacle Preps had its business license revoked, I decided to take a closer look. Type "Pinnacle Preps" into the search field on the Arkansas Secretary of State's website, and it yields the following result. Pay close attention to what the red arrow is pointing at 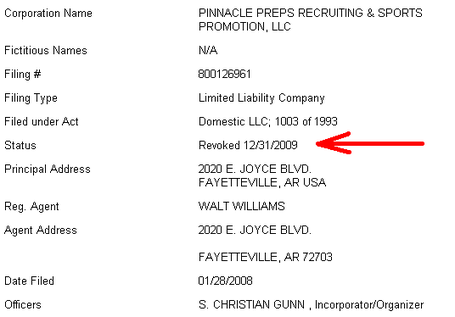 And what does it mean when a corporation has its status revoked? Per the FAQ on the Secretary of State's website:

What does it mean when a corporation is revoked?

Corporations that are in a revoked status endanger their corporate protections and are barred from many corporate activities. Revocation occurs for failure to comply with all franchise tax obligations. The most common reason is the failure to pay its annual franchise tax.

Ah, hell, who really needs to pay taxes anyway, right? I guess ol' Walt has been subscribing too much to William Benson's theories about how taxes are unconstitutional or something.

In any event, that revocation date of December 31st, 2009 is fairly interesting, if but for nothing more than the fact that Pinnacle Preps continued to operate for several months after that. He wasn't served in the lawsuit until mid-February of 2010, and Pinnacle continued for some time after that. If nothing else, revocation didn't faze him immediately.

Interestingly enough, though, regarding Williams' new venture, if you do a search for "Elite Edge Sports Promotion," you get this result:

Likewise, if you search "Walt Williams" in the Registered Agent field, you get a few search results -- including Pinnacle Preps -- but nothing about an "Elite Edge Sports Promotion." 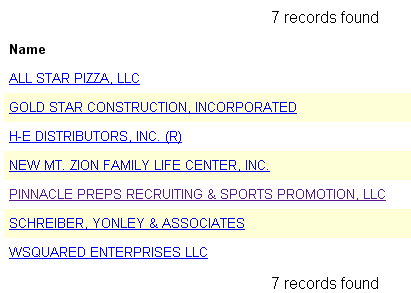 In other words, just like the supposed "non-profit mentoring organization" touted by Sean Nelson, "Elite Edge Sports Promotion" apparently does not legally exist. The Elite Edge website was created in July of last year, and the location listed explicitly on the site is Fayetteville, but roughly six months later the "company" has seemingly still not been incorporated in the state of Arkansas.

Finally, I also mentioned yesterday that Williams had removed any reference to his name and likeness on the new Elite Edge website, and I will add that he has seemingly taken additional efforts to conceal his identity. Normally when you register a domain name, your personal contact information such as name, address, email address, and even phone number are made freely available and can be located with ease when you search domain registration sites. For those who want to keep this information private, however -- or at least more difficult to access, anyway -- there are a variety of privacy protection services available where after paying a fee a company will instead list its name, address, and contact information when someone searches for domain information regarding your specific site. And when you look up the domain name record for Elite Edge? 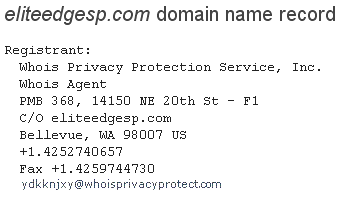 Apparently ol' Walt thought it would be a good idea to protect his identity even further than usual with his latest venture. Can't say I blame him...