Our ol' buddy Coach Fran is headed back to Division 1-A football. Sort of. He has been chosen as head coach at Texas State, where he was previously head coach in 1990 and 1991, before spurning them on his way to New Mexico. The whatever-in-the-hell-they-are's will make the move to Division 1-A at the end of the 2011 season. Per ESPN:

Franchione was once head coach at Texas State which is slated to join the WAC in 2012.

And more from the Fort Worth Star-Telegram regarding his daughter:

Don't be surprised when Fran' hires his son, Brad, who recently resigned as head coach at Blinn Junior College. Brad Franchione won a pair of national titles there, but it was no secret he wanted to get out and try to crack the higher ranks of college football. I expect him to be the defensive coordinator. This is the break he wanted. It will also be starting point for his dad to begin the process of repairing the once pristine reputation he so carefully destroyed.

Quick, anybody know Texas State's main rival? But seriously, I hear that Kim is absolutely delighted with the news. No word yet on whether or not the deal includes Writer Mike. If so, those Friday's with Fran will be a hoot, and never underestimate the always interesting Kim's Korner. Yep, just vomited a little.

Speaking of Fran's daughter, though, he was head coach at Blinn when Cam Newton was there. And, yeah, he's about as dirty as you would expect when you mix Franchione genes with the Newton family. He was suspended earlier this year by Blinn for what they dubbed "unathorized sale of college property." Basically he was selling seats from the old Texas Stadium owned by the university and pocketing the cash for himself, when the money from the sale was supposed to be going to the football team. Classy guy, no doubt.
And since we're speaking of old coaches, let's run by the post-Bryant candidates again. Ray Perkins ended up washing out at Arkansas State to end his head coaching career, Bill Curry is at mighty Georgia State, Gene Stallings never coached again, Mike Dubose -- after a tour of high school and no-name colleges -- is a position coach at Memphis, Mike Shula is a QB coach in the NFL drawing no interest whatsoever on a staff that must make the playoffs next year or get fired, and now we have Coach Fran at powerhouse Texas State. Moral of the story? It's probably not the best idea to leave 'Bama, if you can't win here, you probably can't win anywhere.
Finally, I'll close with a bit of an embarrassing admission from the Fran era, and I believe the pictures will speak for themselves. I'm proud ashamed to tell you that I am the proud ashamed owner of the following personalized, autographed photograph of a certain Alabama coach, still encased and protected in its original packaging: 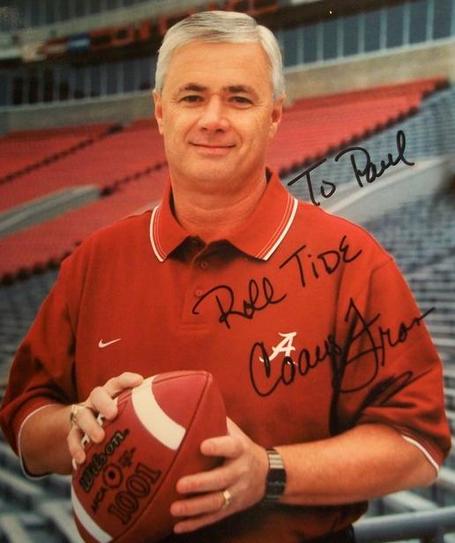 If any of you guys can come up with a good public burning ceremony / idea for next football season that does not violate any applicable laws, destroy all of my Earthly possessions, or will otherwise result in my life ending in an accidental cremation, I'll offer this one up as a sacrifice to the Football Gods next season. Gotta come up with something good, though, going to need something more elaborate than a video camera and a Bic lighter to send this one to the ash heap of history.