Remember when I wrote last night that Auburn had better be as clean as the Virgin Mary or failing that as smart as Stephen Hawking to cover their transgressions, specifically with me betting they are neither one of those two things? Well, luck be a lady, guess who is on Facebook broadcasting their lives to the free world with effectively no account restrictions whatsoever? None other than Sean Nelson and Greg Robinson. And, major shock here, quite a few things you run across will raise your eyebrows and peak your curiosity.

First off, remember how Nelson presented himself as a very big LSU fan to Evans who was merely trying to show the kids that there were more things to the world than just south Louisiana? Specifically, the following two quotes:

Inside the superstore are racks of purple and gold Tigers T-shirts, sweatshirts and sweatpants. And in the automotive department in the back, one of LSU’s biggest fans, Sean Nelson, works as an oil-change technician.

During an interview last month at a fast-food restaurant in which he wore a gray LSU pullover, Nelson, 30, talked about ...

When you do a bit of sleuthing, it doesn't quite seem that Nelson bleeds purple and gold quite as profusely as most Cajuns. In fact, he's friends with practically the entire Auburn roster, as well as Trooper Taylor, Trooper Taylor's son, and Curtis Luper, and he contacts several people associated with Auburn on a frequent basis. And his messages... well, for a self-proclaimed LSU fan, Nelson certainly has a strong affinity for Auburn, an affinity that is so strong that Nelson apparently took to trying to sell Auburn car flags to Thibodaux residents: 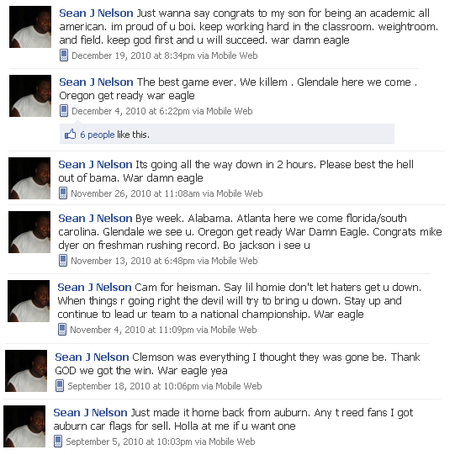 In fact, it seems objectively that despite the assertions that he made to the contrary to Thayer Evans in that interview, Nelson doesn't actually hold much for the Bayou Bengals. If you didn't accept his word at face value, which you would never fathom doing since he is clearly such a character individual with exemplary integrity, you might actually swear he actually isn't particularly fond of dear ol' LSU. Note the following two exchanges:

Furthermore, do you think that Nelson spends his Saturdays in Thibodaux worried sick over Les Miles and his clock management skills? Not exactly. The parents of student-athletes get complimentary tickets to home football games -- no idea if that extends to guardians, though, or if Nelson is even legally the guardian of Reed or if that is merely a colloquial term he used to describe their relationship in the interview -- but for a supposedly impoverished individual he somehow found the means to pay for transportation to a lot of Auburn football games this year, even though Reed appeared in only one game this season due to a knee injury:

And believe it or not, it seems that Nelson at least tries to do what he can to urge other recruits to sign with Auburn, too. Note, for example, the following message he sent to 2011 recruit Mike Blakely on October 21st, asking for his telephone number via private message and wondering why he is waiting to join "the family":

For the record, Blakely was a heavily recruited tailback / defensive back recruit out of Brandenton, Florida. That message was sent roughly five days before Blakely committed to the Florida Gators, and roughly three weeks after Blakely visited Auburn and named them his leader.

As a final kicker, his "non-profit mentoring organization" is on Facebook as well. For the most part, there is really nothing of note to it, other than the fact that it is listed as being founded the day before the kick-off of the 2010 football season and that their only "event" was a poetry reading last month -- what in the hell kind of poetry you find down in Thibodaux, I do not want to know -- that, with food included, cost a whopping $15 per person, $25 for couples. But browse the following references that he made to the organization, and see if a certain repeated phrase rings a bell: 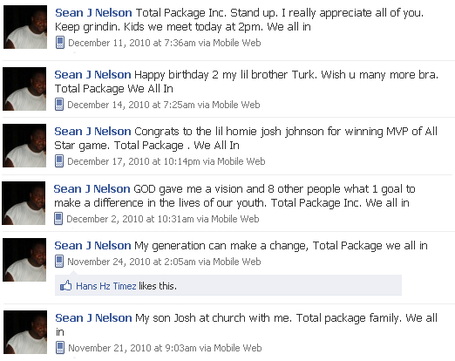 "We all in." Hmm, can't place where, but it seems like I've heard that phrase used somewhere before.

Final one here, this one regarding Auburn commitment Greg Robinson and the specific pay-for-play allegations that former Thibodaux head coach Dennis Lorio made regarding his recruitment. The specific line from the story:

Former Thibodaux High coach Dennis Lorio says several coaches and students saw Robinson show off cash and a new iPhone at school after a visit to Auburn. Robinson wrote in a Facebook message in July that he got the phone when "I came to Alabama."

Not surprisingly, the message Robinson wrote in July claiming that he got the iPhone when he "came to Alabama" has since been deleted (oh no, no way that looks like you have something to hide). But if you go back far enough, you run across this little gem:

Anyone want to guess where Robinson was the weekend before June 2nd? On an unofficial visit to Auburn.