Nico Johnson and Jerrell Harris both arrived in Tuscaloosa as highly-touted recruits, but in the years since their arrival they have yet to translate that prep hype into on-field performance. Johnson had a strong true freshman campaign that saw him as a starter on the 2009 national championship team, but his development slowed over the past year and his inability to play the pass has kept him off the field at times, despite being arguably the Tide's best linebacker against the run. Jerrell Harris, on the other hand, took four years to win a job most observers thought he would win in his first four weeks on campus and was largely a non-factor in his first three years at Alabama.

In recent weeks, however, Johnson and Harris have both played at a much higher level. Jerrell Harris has arguably been the biggest surprise of the 2011 defense, and has been a difference-maker as an every-down player the past three weeks. Meanwhile, Nico Johnson has stepped in for the injured C.J. Mosley and shouldered greater responsibility in pass coverage, and by all accounts has done very well. In garbage time last weekend against Vanderbilt, one play in particular highlights their develop well, so let's take a closer look at the film:

Facing a third and one early in the in the fourth quarter, Vanderbilt lines up in the shotgun and spreads the field with three wide receivers. No it's not the typical call given the situation, but the book largely goes out the window in the face of a 34-0 deficit and that is the case here. In response, 'Bama breaks the defensive huddle with only three true linemen. Jesse Williams lines up directly over the center with Damion Square and Undra Billingsley manning the end spots. Outside linebackers Alex Watkins and Jerrell Harris move down to the line of scrimmage to put five Tide defenders on the line. 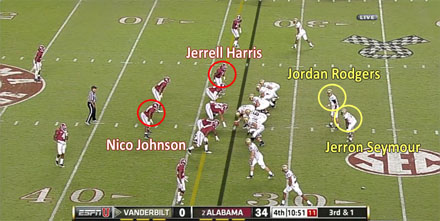 Not that the 'Dores really feigned much of an interest in running the football, but when Jerron Seymour goes in motion the pass becomes obvious. Seymour motions wide to the strong side, and 'Bama linebacker Nico Johnson follows him across the formation. 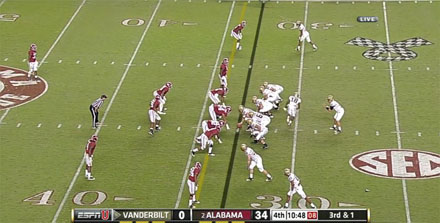 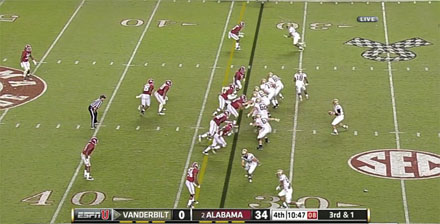 When the football is snapped, everything flows to the offensive right and Rodgers rolls accordingly in that direction. Both Harris and Watkins come racing hard off the edge to rush Rodgers, but pay especially close attention to Harris and Nico Johnson.

The Vanderbilt wide receiver runs a deep route, taking Tide cornerback Dre Kirkpatrick with him, in an obvious attempt to clear out the underneath for a quick flare route to the back out in the flats. For what it's worth Kirkpatrick has good coverage, but the wide receiver is not a realistic option here and Rodgers never really looks in his direction. The play is designed for the back on a short pass to move the chains and barring that Rodgers is on his own.

In the next five still frames, look closely as to how Johnson covers Seymour like a blanket, taking away the only real option on the play, and how Harris makes mince meat of the tight end responsible for blocking him in pass protection. 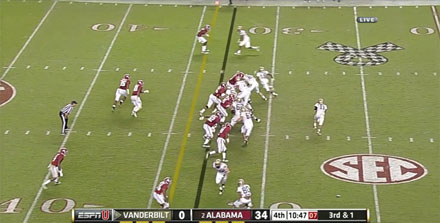 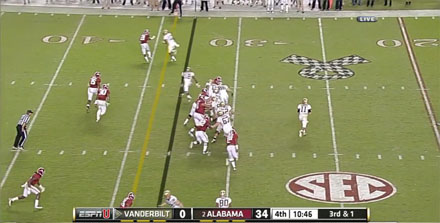 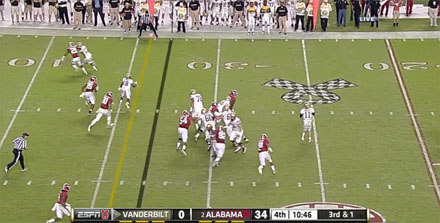 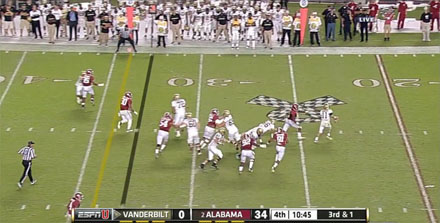 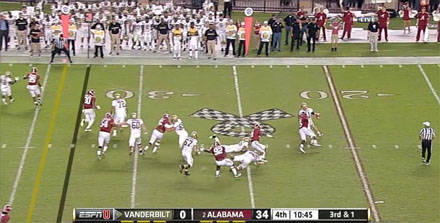 Harris narrowly misses the sack, but in the process the pressure he generates totally disrupts the play. Had Harris not broken through and forced Rodgers to retreat backward, Rodgers would have a run option (difficult as though it would have been with Dont'a Hightower spying him). By having to give up ground, Rodgers has no choice but to try to throw the football downfield.

Notice, though, how well Nico Johnson acquits himself working in space. Always his Achilles heel, Johnson blankets Seymour out of the backfield and stays with his man as Seymour re-directs the route. 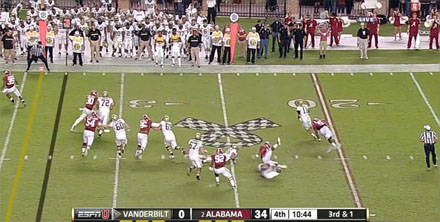 With Rodgers having escaped the pocket when Harris misses the sack, Dont'a Hightower comes crashing down hard on the Vanderbilt quarterback. With Hightower quickly closing in and looking to lower the boom, Rodgers has no choice but to throw the football to the back and hope something good happens. 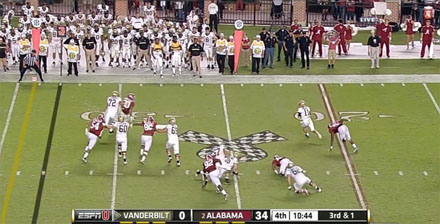 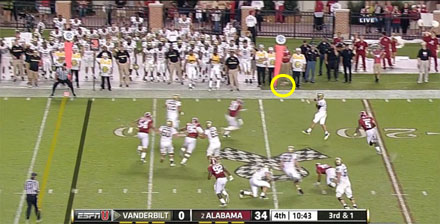 In the meantime, realizing that Johnson has the flare route blanketed and seeing that his quarterback must deliver the ball somewhere, Seymore ad-libs the route and quickly turns back to the to the middle of the field, where Rodgers attempts to hit him about five yards beyond the sticks. 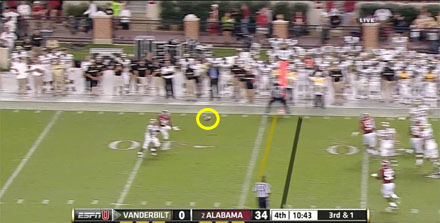 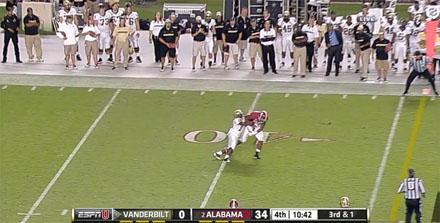 Johnson gets turned around a bit in space but recovers nicely and when the throw is slightly behind the receiver he quickly identifies the ball and makes the interception. Together, Harris finally puts his athleticism to good use by effectively rushing the passer, and Johnson does the same by proving solid coverage on the back end. Yes it's garbage time against a lesser opponent, undoubtedly true, but even so one of the driving forces behind the 2011 defense has been the continued development of certain players who have not been so productive in the past, and in this instance both Harris and Johnson show how their progression has contributed to the improved play of the defense this season.