Face it, college football is better when Texas is losing. Well, perhaps not better, but definitely more entertaining. Nothing on Broadway in decades has been anywhere near as funny as a Texas message board after the Longhorns go down, and that was again the case this past weekend with Oklahoma State having their way in Austin.

Outside of Texas, with the college football season turning towards the second half there was no shortage of meltdown material across the country, but for purposes of brevity we've capped the piece this week to three more schools. Florida put on one of its ugliest performances since the Carter administration, allowing a weak Auburn team to win with ease simply because the Gators couldn't field a punt, and the once-proud Gator fans were fuming with rage. Meanwhile, Tennessee continues to fall even farther, and with the Vols not even being able to put up a decent fight against LSU more than a few are turning on Derek Dooley. And, of course, we have Ole Miss. Why not? At the end of the day we always have Colonel Reb to kick around.

Oline was so bad my dog fell off the couch.

if allen sees another down...i'll fucking kill a kitten....

My guess is Searels shows up drunk to be able to make it through watching game tapes of this shit.

this is why i take drugs.

we gotta stop em now or i throw laptop against wall

The 3rd graders playing in the flag football game i watched earlier were more disciplined. Actually, the play calling was slightly better too...

Fuck. Any suggestions for how to make another fucking 5-7 Squints v2 season more tolerable?

This one is gonna burn, like the burn I had after that girl who said she was a virgin

Suck my balls. You are buying into the idiocy that guarantees a 5-7 season. Enjoy it fucker.

Apparently there was some dude sucking his cock the entire game that kept them from changing QBs.

and people wonder why we always lose recruiting battles with LSU.

Fordham's "seven blocks of granite?" We've got two blocks of sandstone, two blocks of tofu and three blocks of (fruity) jello. I'll leave it to Shaggy to determine which are what.

Who doesn't take a 4 year vacation from recruiting sometimes?

My computer needs a breathalyzer

Stop it with this #6 team in the country bullshit. Okie State has never ranked that high in anything except fucking their sisters, it's a meaningfuless fucking number

There is no progress there is only temporarily less shittiness

We must recruit paralysis recovery centers looking for offensive linemen

I swear to God I'd send every fucking olineman to Guantanamo if I were Mack.

You puke your guts out. You know your going to shit them out next. But you feel good for now. That feeling is this football team

I got so drunk last night I pissed all over myself and ruined our new couch. Still better than watching this team play

Go figure: That Boise shit don't work when you're not with the Scientology fucker and playing San Jose State 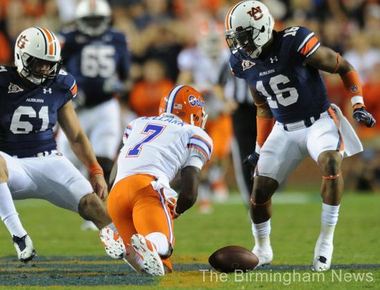 WTF does Rainey have dicks for fingers?

Time to pull out the "Wait 'til Next Year" banners.

Going to be a real tight race between Rainey and Reed for the Steaming Pile of Dog Shit award. maybe they can split it.

Expletives fail me. Richt may get his win this year.

fitting end to this pile of shit

Muschamp really is a bulldog. He is antisubmarining our progam. He reminds me of Ray Gofff WAY too much

Fire the whole fvkin Staff, I will say it again...Fire Muschamp, he does not have the coaching nor ability too lead this team, now or ever!! He's going to be another Steve Spurrier.

Let's forfeit the rest of this season and move on.

I just slammed my penis in my bedroom door, it felt better than watching this team.

Should have stuck it in the toaster and at least scored.

Can Addazio come back and be the offensive coordinator?

I just cut my wrists

I''ve discovered the perfect cure for insomnia. Just put a tape of this game in and you'll zone right out.

Where is that NAPA commercial when you need it to push you to suicide? 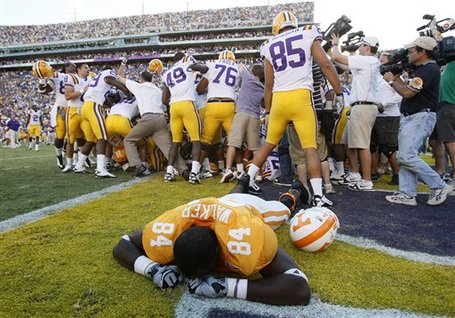 Their coach eats grass, our coach dresses like he's marching in a gay pride parade

What is this? An offensive line with an actual human pulse? Did I die?

That Claiborne interception was a chainsaw to the sack

Simms completed eight passes today and two of them went to LSU. Kiffin should be burned at the stake for telling Boyd to piss off.

Rival fans used to tell Tennessee jokes. Now they just watch one of our games.

Fire em all and take their welfare benefits

We're the ugliest thing to hit TV since Roseanne returned

Watch the rest of this shit if you want, but pass me the damn strychnine. 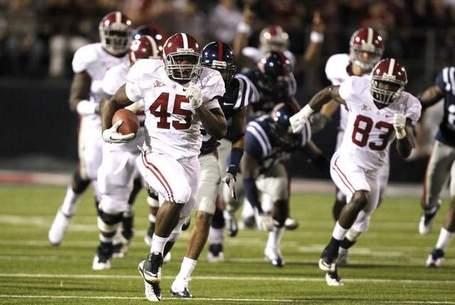 After 36 years of thinking it couldn't get any worse, it just got worse.

The fact that a fucking PLAYER had the emotional outburst after that infected hemorrhoid rape of a game specifically because he’s smart enough to realize that we are losing because of said "coaching".

Were there not any Ole Miss vets to honor? We bent over for Bamma so bad we even forfeited the pregame ceremony

Worst Ole Miss Defense in HISTORY of the Program

Let's start cheating like crazy, I mean paying kids huge money, all of them. So what if we get caught and the NCAA vacates it and hammers us with sanctions? We weren't going to win any games anyway

Thanks a lot Bammer. They'll be showing that Richardson run for 50 years so this shithole team will live forever.

That wasn't so much a football game as an alien invasion. I've seen Ole Miss take it up the arse many times but never like that

Ole Miss football will rise about the time that Jefferson Davis and Robert E. Lee do

First off thanks to Alabama, they donated us that easy touchdown to start things off, you know to really help out with self esteem and all. They could have won 100-0 but peeled it back to 52-7, which is better than anything Houston Dale has done for Ole Miss football in two years

At least it wasn't Jacksonville State

Even their fifth string is raping our starters. They would have won by 30 if they left their two-deep roster in Tuscaloosa

I think we recruit ComicCon for football players