Saturday night was nearly a perfect night in Oxford with Alabama dominating on its way to a laughable blowout. Most of the night it was evident that the two teams weren't even in the same stratosphere, but there was one key mistake early made by the Tide, and in this week's film room we'll dissect the lone bright spot of the evening for the Rebels before turning all attention to Tennessee. Let's take a closer look at the film, first starting with the background and the pre-snap alignments.

Having picked up a new set of downs, on first and ten Ole Miss lines up in the shotgun formation and spreads the field. With two wide receivers to each side of the formation, Ole Miss stacks the receivers by putting one receiver on the line with another lined up directly behind him. Doing so ensures a clean release for the trailing receiver and makes it somewhat more difficult for opposing defensive backs to quickly identify route combinations. Randall Mackey brings a running threat to the quarterback position and with small speedster lined up at tailback the run must nevertheless be accounted for despite the spread formation.

Defensively, Alabama responds by going to its 4-2-5 package. Josh Chapman goes out of the game, in comes Ed Stinson, and 'Bama lines up three true defensive ends along the line to go with Jack linebacker Alex Watkins, who is lined up at end and playing with his hand on the ground.

Pay especially close attention, though, to the back end of the defense. With the two linebackers sitting inside, 'Bama goes with only three cornerbacks. Dre Kirkpatrick and DeQuan Menzie are lined up top to cover the receivers to the offensive right, but to the offensive left it's DeMarcus Milliner and safety Mark Barron. Milliner has outside leverage on the receivers, while Barron plays inside, looking to jump a short route or re-direct a longer route back to the interior of the defense. Off camera, free safety Will Lowery is lined up in his usual deep position looking to play zone over the deep middle. 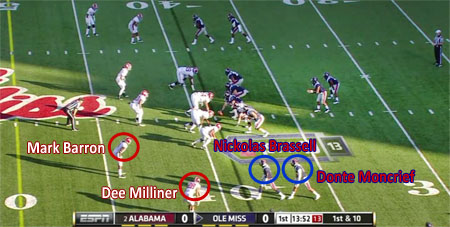 When the ball is snapped, Alabama rushes its down four, as expected, but despite a highly effective pass rush in recent weeks the defensive line has no real chance here with the ball coming out so quickly. Follow the eyes of Mackey as he retreats from center, and it becomes clear that he is staring down Brassell the entire way. 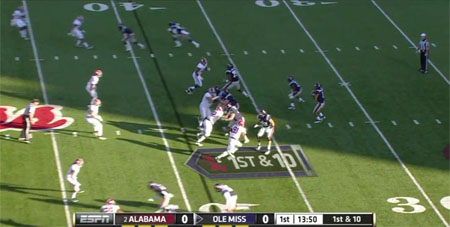 Brassell comes hard off the line of scrimmage and charges upfield. Milliner, showing the deep responsibility, maintains outside leverage while looking back towards the backfield while he turns his hips to run downfield. 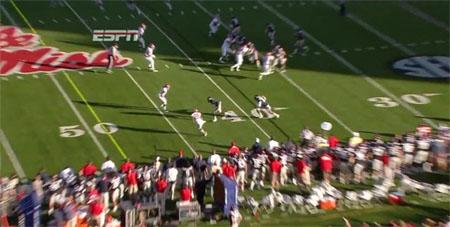 With Brassell charging at full speed, it takes little time for him to eat up the pre-snap cushion that Milliner provided him, and on short notice he is almost side-by-side with the Crimson Tide sophomore. 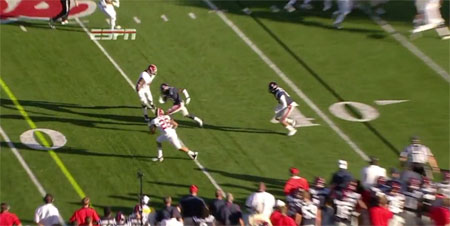 Deonte Moncrief, the trailing receiver, breaks off his route and runs a short curl. As expected, Mark Barron jumps on the short route, but in the end it's to no avail because Mackey clearly intends to deliver the football to Brassell.

With the pre-snap cushion all gone, Milliner can turn and effectively chase Brassell. No one doubts that Brassell is a high-end athlete, which is the main reason schools like Alabama recruited him, but Milliner is one of the quickest players in the conference in his own right and should be able to hold his own with Brassell, which would force Mackey to deliver a strike to get the completion.

Milliner, though, makes the slightest hesitation as Brassell comes by. Apparently thinking that Brassell will not run the deep vertical route, Milliner slows for a fraction of a second, and in that short period of time allows Brassell to run right by him. Notice the hesitation it the next two still-frames and the separation that it yields Brassell. 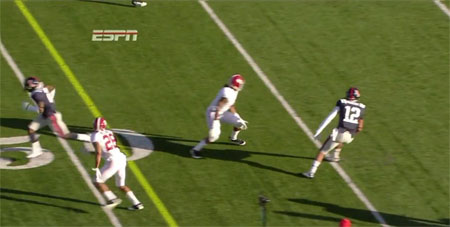 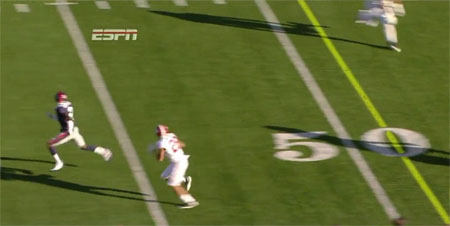 By this point, given the slight hesitation, Milliner is beaten and the only hope he has is a bad throw by Mackey. Will Lowery was playing the deep middle, and while this would have been a very difficult play for even the rangiest of safeties, Lowery is an athletically limited walk-on and he has no real chance of proving any help on the deep vertical route down the sideline. It would take an elite athlete with great balls skills to provide any real support here (and even then it might still not be enough), and Lowery simply does not possess that type of range. 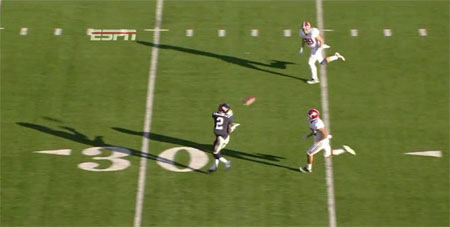 Mackey makes a solid throw, but not a perfect one. The ball is slightly underthrown and Brassell has to slow to make the catch, and just as Milliner's slightest hesitation allowed Brassell to run free, Brassell's slightest hesitation allowed Milliner to get back in the play. Milliner chases him down in the final twenty yards before just making enough contact to shove him out of bounds inside the five yard line. 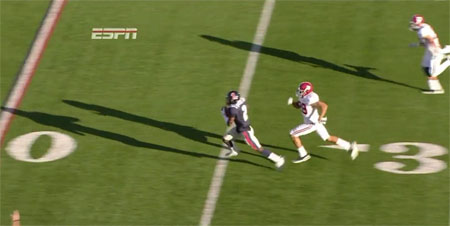 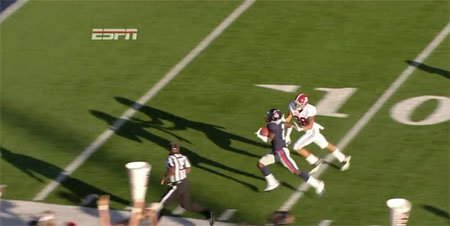 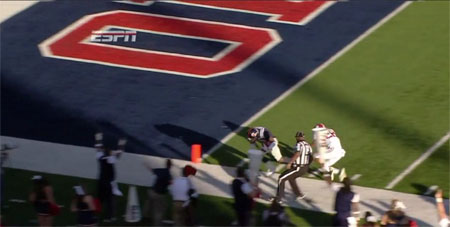 Ole Miss scores a couple of plays later, making Milliner's recovery go all for not.. Of course, though, 'Bama responds defensively by dominating the rest of the evening and in the end the early Rebel touchdown becomes just a meaningless speed bump on the otherwise smooth road to victory. Or, stated with some Faulkner-esque flair, full of sound and fury, signifying nothing.

Even so, Nick Saban continuously preaches process in Tuscaloosa, not allowing end results to overshadow attention to the finer details of the games that he knows will ultimately decide future contests. This was a harmless error in Oxford, but mental mistakes have been an issue for DeMarcus Milliner since arriving on campus, and while they have improved over time they have not entirely abated, as evidenced by this play against the Rebels.