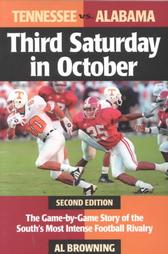 Since the expansion of the Southeastern Conference in 1992, The Third Saturday in October is a name without a tether in reality. Rather than designate a specific weekend on the fall football schedule when the Alabama Crimson Tide and Tennessee Volunteers would meet on the gridiron it has simply become a title for a rivalry. And the rivalry is contentious enough, the name is still going strong.

It is also a title of Al Browning’s book on that rivalry, Third Saturday in October: The Game-by-Game Story of the South's Most Intense Football Rivalry. Built in the same format as Browning’s Bowl Bama Bowl, the book has one chapter for each game in the series starting with the 1928 contest, the first to be held on the third Saturday of October. There are also several essays scattered throughout focusing on the various head coaches that lead the teams through the seven decades described.

(The original edition of the book concluded with the 1987 season but the more recent second edition goes all the way through 2000.)

The result is a treasure trove of classic games rarely recounted in detail anymore. Here is the magestic kickers duel in 1932 between Tennessee’s Beattie Feathers and Alabama’s Johnny Caine that saw the Vols claim a 7-3 victory. Here is the classic come-from-behind 17-10 victory by Paul W. Bryant’s 1972 squad that found a way to score 14 points in the span of 36 seconds.

And here you will also find the "forgettable" games like the 1963 contest where five Volunteer fumbles and the performance of Joe Namath led to a 35-0 blowout only remembered for its final score.

Along the way Third Saturday in October delivers a treasure trove of fantastic anecdotes. There is the moving van parked in front of the Tennessee head coach’s house when fans felt he was losing to the Tide a bit too often and Coach Bryant breaking down the locker room door at Legion Field following a 7-7 tie in 1965.

Browning, it must be noted, is a native of Alabama and alumni of the University of Alabama and his book sometimes seems to be penned from a Crimson Tide point-of-view. Still, as a former sports editor at both the Tuscaloosa News and the Knoxville News-Sentinel, he’s in a unique position to tell the tale of the Alabama Tennessee rivalry with a reasonable degree of objectivity.

Perhaps the most important aspect of Third Saturday in October is how it clearly demonstrates what transpired to make the Tennessee such an important foe for the Alabama program. The Third Saturday in October emerged as the Crimson Tide’s premiere rivalry in the 1930s due to two all-important factors: the absence of an in-state program of similar stature and the quality of coaching on both sides.

The Crimson Tide and its traditional foe, Auburn, had brought their annual contests to an end in 1907 and as Alabama’s football star ascended in the 1920s there was no regular regional opponent to fill that gap. Things changed in 1926 when Robert Neyland took over the Volunteers program. Alabama, first under Wallace Wade and then Frank Thomas, found a worthy rival in the man who would become known as The General.

Neyland, for his part, knew full well the importance of the series. For years, according to Browning, the Tennessee coach would start Volunteers’ preseason practice the same way: "On a chalkboard he wrote one word: Alabama."

Browning’s book is superb at showing how bitter the battles between these two well-coached squads were through this era which established the roots of a classic southern rivalry. There is a constant refrain in the second half of the book where coaches have to impress on players the importance of the rivalry. 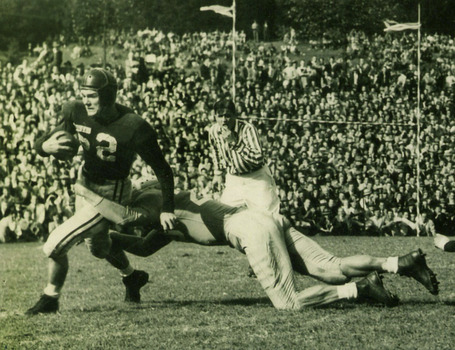 Alabama's Harry Gilmer struggles for yardage in the 1946
contest in Knoxville. The Vols blanked the Tide 12-0.

The forces of change were not kind to the series as Third Saturday in October makes clear. Later generations would witness long winning streaks by either side and, eventually, the Crimson Tide’s annual contests with Auburn would resume. All of which served as distractions from a series once touted as the most contentious and hard fought in southern football.

Third Saturday in October is a gold mine of data, recollections and personal accounts of these contests but it does drag on at times due to its game-by-game format. Browning particular writing style can also be distracting at times but these are minor issues. The more serious concern are important omissions from the narrative and none more than the impact of integration on the two southern teams.

Tennessee’s Lester McClain became first black football player in the Southeastern Conference in 1968 and for three years they played against an all-white Alabama team. That represented a monumentally important change in perceptions that is now heaped on the 1970 Alabama USC game.

Moreover, Tennessee’s Condridge Holloway, the first black Quarterback in the SEC and John Mitchell, the Crimson Tide's first black player are both name dropped with nary a mention to their profound significance. It could be argued that the focus of the book is simply the action on the field but Browning deviates from that to discuss the impact of events such as Bryant’ legal battles with the Saturday Evening Post.

Still, Third Saturday in October is not just an interesting read it’s a valuable contribution to the literature of both programs. Perhaps the most striking lesson it offers is how similar sentiments today are to those of the past. At one point in Third Saturday in October, Browning recounts the feelings of former Knoxville News-Sentinel sportswriter Harold Harris toward Joe Namath.

"I hated Namath, even after he turned pro, because of the way he played against Tennesse," Harris said. "All Tennessee people despised him."

Certainly quite a few contemporary Alabama fans have felt much the same about the professional career of Peyton Manning. And, thus, the rivalry continues on...