Going into the 2011 season, the biggest question mark hanging over the Alabama Crimson Tide's prospects was the quarterback position. With two inexperienced underclassmen vying for the starting spot, a lot of ink was spilled over how much that hobbled Alabama's hopes for a successful season.

With A.J. McCarron taking over the starter slot with authority against Kent State, the concern turned to how fast it would be until he was ready to face SEC-level defenses. A lot of the playcalling in September was clearly designed to give him time to get comfortable in his role under center but, at the same time, each week he was asked to do a little bit more.

But doing what is asked and limiting mistakes is a heck of lot different than taking command of the quarterback position. During the Tennessee game there were several plays that hint McCarron might be ready to take this next step forward. One of them occurred at the start of the second quarter.

With second down and five to go, the liklihood Alabama would go to the running game seemed pretty good. As they did much of the afternoon, Tennessee put eight men up to counter any attempt by running back Eddie Lacy to move the sticks. Tight End Jeremy Shelley goes into motion before the snap and sets up on the weak side of the line as if he'll be handling blocking for No. 42 downfield. 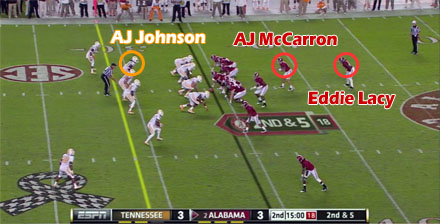 Once the ball is snapped wide receivers Marquis Maze, Darius Hanks and tight end Brad Smelley shoot off downfield. McCarron gives a play action fake and Shelley joins the OL with protection. Lacy heads upfield into the line in case the Vol's outside linebacker A.J. Johnson tries to shoot through. 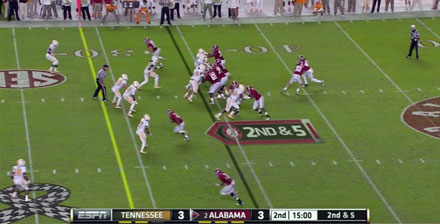 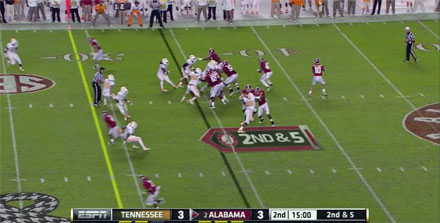 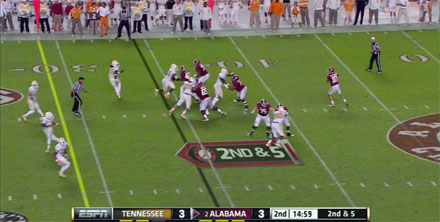 When Johnson hangs back, Lacy moves through the line and heads toward the sideline as McCarron's dump-off option. Meanwhile the Tennessee secondary seems to have the Tide wideouts covered deep since McCarron holds onto the ball in the pocket. Then McCarron rears back like he's about to toss it downfield... 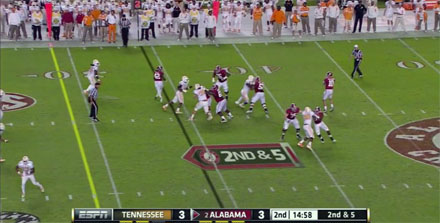 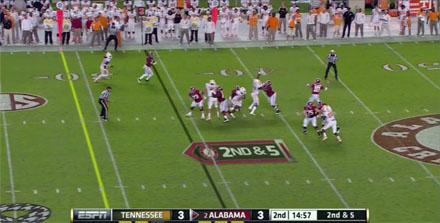 ...but instead of unleashing the long bomb, he stops at the last moment and begins to scramble as the pocket starts to collapse around him. UT's Johnson has moved forward to cover Lacy in case McCarron seeks his safety valve so the Tide signal caller starts to improvise. 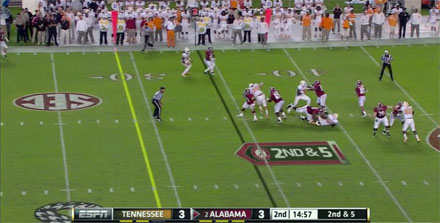 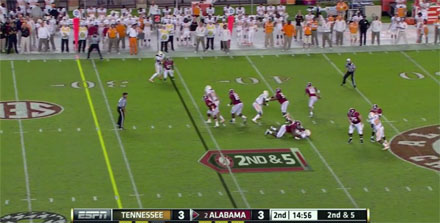 Seeing Lacy covered he heads out toward the sideline as if he's gonna scramble for what he can to make third down more manageable. UT's Johnson, seeing the Tide QB out in the open and oh-so-ripe for a hard hit leaves Lacy and heads in for the kill. 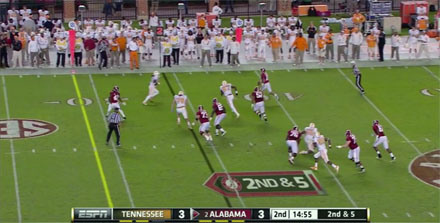 Then, instead of scrambling out of bounds or throwing the ball away wildly, McCarron draws up and lofts the ball to the now open Lacy standing on the first down line. 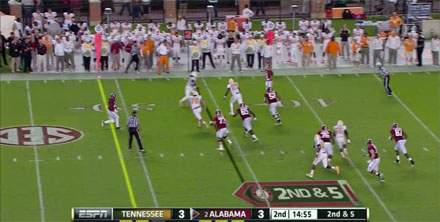 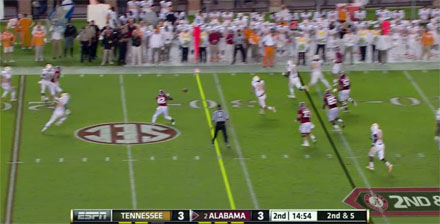 The Tide tailback then grabs and extra few yards after the catch and, since this is Tennessee, got hit with a cheap shot by No. 97 Malik Jackson. No matter what happens, don't ever change, Vols. 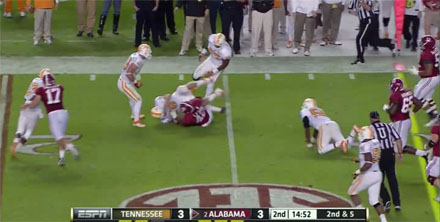 The play is a nice example of McCarron "creating" and opportunity with his feet when the opposing defense wasn't giving him very much to work with. Instead of settling for not making a mistake, he responded by making the situation work to his advantage.

Did McCarron knowingly lure Johnson forward to uncover Lacy? That's difficult to say. But what is important is he recognized the opportunity when it was presented and used it effectively. And this wasn't an isolated incident. On at least one other play Saturday night McCarron reacted in a similar manner. That a very positive sign for the Crimson Tide going forward.