Why settle for mere victories alone when you can take your victory with a side of meltdown?

After three consecutive dominating performances against the Florida Gators, the rational response would simply be that Alabama has fielded a better team and the scoreboard has reflected that underlying reality, but since when did rational thought have anything to do with the beauty of meltdown time? Oh no, we're throwing logic into the industrial strength garbage disposal and turning loose those cave man instincts and paranoias. It's not on-field superiority. Hell no. Never. It's, er, paying referees, or steroids, or something. They're not crazy, your just naive. Can't you see it? Either way, you can feel the Gator butthurt all the way north of the Mason-Dixon line.

In other notable meltdowns this week, Texas A&M received a free preview of life in the SEC this past weekend courtesy of Arkansas, choking away a big lead in the second half to the Hogs, the Ohio State offense found the Michigan State defense the football equivalent of George Patton's Third Army, and all of those happy little delusions died a long, painful death this weekend in Columbia. 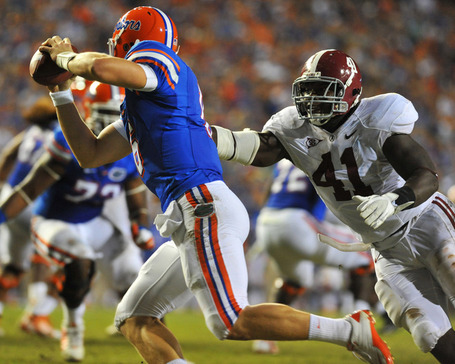 Back to youtube to watch highlights from the harvin, spikes, tebow era. Livin in the past is awesome.

Game. Someone get a rag to clean Garys splooge out of the booth

Someone needs to do Drug Test on those Bamma Lineman. They are just too big and strong to be natural.

’Bama’s OL holds. Every single play. All the time. I understand that teams do it quite a bit, but this is a joke.

It takes a lot for me to lose respect for a team/person. But this ’Bama team and Saban, the OL coach for ’Bama are on my list. All they are, are a bunch of punks. They are beyond dirty. Scumbags.

During every replay I see at least two holds when Bama has the ball.

Bama is never called for anything. They don’t get the big breaks from the league they used to (Legion Field hosting the SECCG etc), but they still get the little stuff. Little stuff meaning rampant holding on every down that will almost never be called.

It just seems like their whole gameplan is to play dirty. It’s almost like Saban knows that none of it, or very little of it will be called. Their DBs are notorious for holding, and interfering. We’re all watching their lineman blatantly hold on every play, yet not a flag has been thrown.

It is unreal. The last time I saw this garbage was 2003 against Florida State. There are a least 2-3 OBVIOUS holds on every ’Bama offensive play.

Exactly!!! They freaking grab him and throw him to the ground!! There is a difference between a pankcake block, and grabbing someone to throw them out of the way. It’s pathetic.

I like how kirkpatrick tried to decapitate demps out of bounds. Refs must’ve missed that one. Saban’s money shot last night at the hotel is still having effects on the zebras vision.

I think it's HGH. Only way it happens

Those all every players like Powell, Easley and Floyd need to shred their High School Clipppings and hit the weight room.

Brantley is done and I don't think we can even beat Vandy.

Muschamp was hired to build a program just like Alabama. Tonight you see why. Foley didn't hire Mullen cause he knew this pussy ball won't work

Bammer holding our jerseys making us hold onto our ankles. Fire these refs

Who needs to pay for a quarterback when you can pay the refs?

Some of you are in denial. The SEC office is in Birmingham for a reason. In Bama's back yard and their back pocket

Since when did Victor Conte get hired as Bammer's S&C coach?

George Mitchell should be sent to Tuscaloosa ASAP

Ive already made the desicion to sell my 3 season tickets for the rest of the year.. I'm not putting anymore money into this piece of shit program

I wouldn't give you $2 for all of 'em. Disgusted. We're going to need a tarp.

It's over guys, we will soon be an afterthought like Mississippi State and Texas Tech. Goodbye salad days, it was a great run.

Should I tell Bill Byrne that Sherman is sending me a secret newsletter?

"Finebaum picked us to lose because he's a dumbass that still hates us cause of the whole Fran deal, not cause we suck horse dick" hahaha, stupid fucking pumpers.

Who wants my sports pass? Never attending another game in my academic career. Why am I paying $300+ to get raped in the ass every week?

This isn't an overreaction. This is the culmination of years and years of this stuff topped off with two epic second half meltdowns two weeks in a row. This is 20 years of frustration with the last two weeks being a cherry on top

I can't stand him, but maybe we need Warren Sapp to kick Sherman's ass

There is no "Old Army." This football program has back in a garbage dumpster since WWII. Stop acting like we had all of this greatness until somebody turned it all to shit.

SEC changes nothing. We make more money and still get our asses kicked on Saturday

So what we don't have Texas. How are we ever going to compete with LSU, Bamma, and Florida?

What do we tell Tubberville? "Thank you sir may I have another?"

We'll be a richer Ole Miss in the SEC. Just hoping we can beat the MS schools and make it to the Music City

We play the second half like its a fucking sunday picnic

How can a team that runs for 350 yards get stuffed on fourth and short to end the game? That would never happen to anyone but aTm

Sherman was a pussy hire that reaked of old A&M. Retread name to save face, yes man to bend over to the powers that be.

How will finishing in the bottom half of the SEC West every year help this football program? There is no argument for expansion that is not built on money

This wasn't a chokejob. This was a forecast. 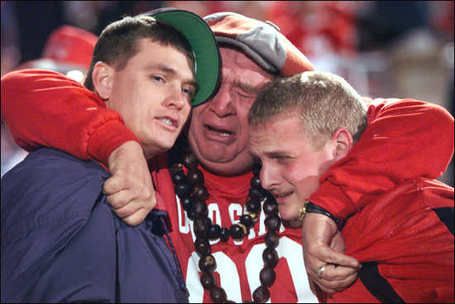 Fickell is a joke. Ohio Stadium is going to riot.

Some where in CT, Mark May is enjoying and laughing w. a bottle of lotion and a box of tissue.

Ugh, I can’t believe the two games I watched today were Penn State – Indiana and Ohio State – Michigan State. I actually started an "S-E-C! S-E-C!" chant by myself, in my living room.

I’d love to see the Big 10 fail really hard and we join one of those super conferences. The Big 10 is a god damn joke now. I really hate the administration with a passion.

3-9 is not beyond the realm of possibility...

I just sent in my application for tix to THE MOTOR CITY BOWL.

Why didn't we self impose a one year bowl ban? At best we play some MAC also ran in late December in some town that imploded 40 years ago

Simple problem :: only ones left are the ones shitty enough not to get paid

We couldn't beat Michigan if Rich Rod came back

Russel Wilson will clinch the Heisman trophy against us

Youngstown State and Central Michigan had more offensive success against M$U than we did. We couldn't outscore the Reds or the Indians.

Our offensive line is as strong as wet toilet paper

Re-hire Tressel. NCAA can't do anything worse than this

Fuck this team, let them jack off to their tatts all day. Wake me up when we've got a new coach. Send Fickell to Cuba.

Who needs waterboarding? Make them watch this offense play. 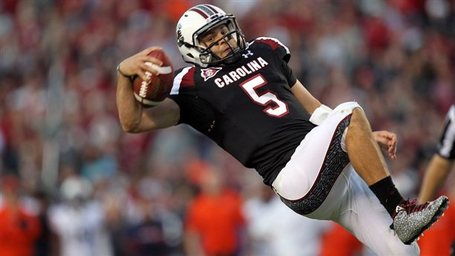 I just want one of you who still worships the ground Spurrier walks on to defend Spurrier as an offensive coordinator, NOT as a head coach. What has the ass-hat done in seven years here to justify keeping his job as OC?

There will be 60,000 or less this saturday at the ballgame. Fans are tired of watching crap football from our joke of a coach

THERE HAS TO BE A REASON SPURRIER KEEPS SENDING THAT TERRIBLE QB BACK OUT THERE EVERY WEEK.

That ref needs to have a vent knocked into his teeth by a baseball bat.

Spurrier is a close second to Lane Kiffin in coaching, play calling and clock management.

Garcia couldn't hit water if he was standing in the middle of the ocean.

I've been trying to type something for 2 minutes and I cant get anything out. Im speechless. To quote Days of Thunder, we looked like a bunch of monkeys fucking a football.

I was done with him after another shit sandwich in the chic fil a bowl.

Garcia should've been kicked off the team 3 suspensions ago. Completely useless. Top 10 in the nation? I'm not so sure we're top 10 in the SEC.

Brad Scott's offense was better than this. I think I just threw up a little.

This is bullshit. Fire everyone.

Anyone have the head refs address?

I wanna punch my clemson fan co worker in the face sooo bad right now... anybody got bail money?

Spurrier is an old senile bastard. He doesn't know what the fuck is going on. Just like Bowden and Joe Pa. Figurehead.

We might as well hire Beano Cook as head coach

The day Garcia signed with the 'Cocks is officially the darkest day in SC football history.

Please somebody show me one player in SEC history as shitty as Garcia who has started as long as he has. Bastard plays like a D-III walk-on and he has lasted as long as Lou Gehrig.

Forget the SEC East, we couldn't win the Big East

We couldn't even get the phuckin jerseys right today. Forget offensive design, we even failed at uniform design.

Dear boosters: If one of you retards paid Garcia to sign with SC, please confess to the NCAA immediately.

I'd convert to Islam if Blake Mitchell would come back