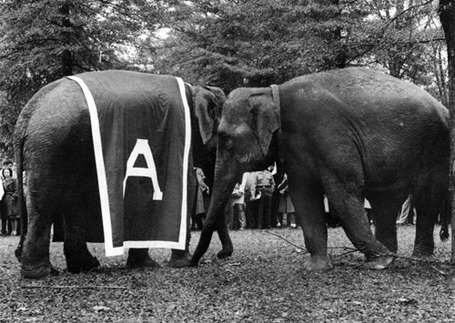 Alabama football has been associated with the elephant since the 1930s. The official account of how the pachyderm was adopted as the symbol for the team goes back to a reference made by Atlanta Journal sports writer Everett Strupper but there are other versions of the story.

What is generally accepted is the practice of referring to the Alabama team as "the red elephants" became common in the early 1930s (an association head coach Wallace Wade was not particularly fond of). Still, the team was known as The Crimson Tide and the pachyderm didn't become adopted as the school's official mascot until 1979.

Yet, despite the unofficial status as the Crimson Tide's mascot, the elephant was very much part of the school's football traditions by the 1940s. It was in that decade that a live elephant mascot named "Alamite" was a regular sight on gamedays in Tuscaloosa (show above in 1945).

For several years it was traditional for the pachyderm to lead the homecoming parade and Alamite would also bear that year's queen onto the field prior to the game as this photo from the 1947 contest against LSU shows. 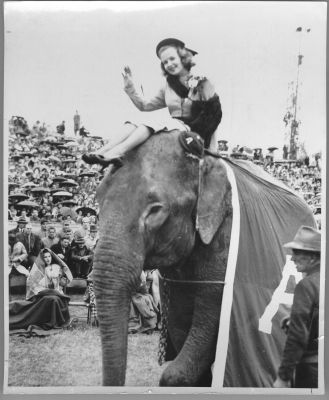 By the mid-1950s, Alamite gave way to a mascot-for-a-day that would be brought in for the homecoming parade and other activities. Reportedly, the cost of keeping the giant animal proved too expensive for the university.

The University of Alabama's "Spirit Planning Committee," a group that included representatives from numerous campus organizations, would spearhead the effort to bring a live elephant to campus as part of homecoming celebrations. These temporary mascots were usually from traveling circuses and would often appear in their performing regalia. Here is a photo of one of these elephants on The Quad for a pre-game pep rally in 1954. 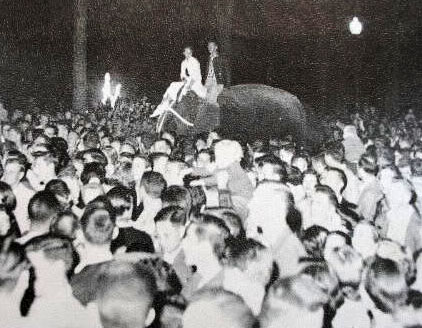 During one period, the Iron Bowl would feature a parade through Birmingham and an elephant and tiger from the Birmingham Zoo would be included to represent the two schools.

The first costumed elephant to appear on the Alabama sidelines was introduced in the 1960s. The first person to don this garb to cheer on the Tide was Melford Espey, Jr. This incarnation didn't catch on for reasons the following photo makes clear. 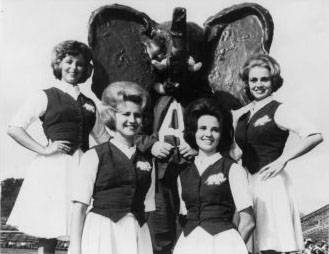 The push for Alabama to officially adopt a mascot started in the late 1970s when student groups appealed to Coach Bryant who was also the Athletic Director. He then turned to Espy to take responsibility of the task. The result was the Big Al we know today who debuted at the 1979 Sugar Bowl. When the Crimson Tide beat Penn State to earn the national championship, Big Al become a part of the Alabama football tradition.

Yet live elephants still were periodically part of the gameday festivities after that time. When the UA Alumni association began the Bama Blast event in 1979 part of the activities included bringing live elephants to the campus. Kept in an enclosure on the quad, these were used to give rides to children during the Homecoming festivities and, apparently, were used in a few of the school's pre-game celebrations. In 1982 a 24-year-old man was injured when he crawled into the enclosure and one of the elephants threw him into the other.

The practice of bringing live elephants to campus was revived at least once more after that in 1990 when a pair were on the UA campus prior to the 1991 Homecoming game against Tulane. 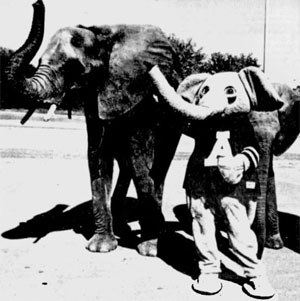