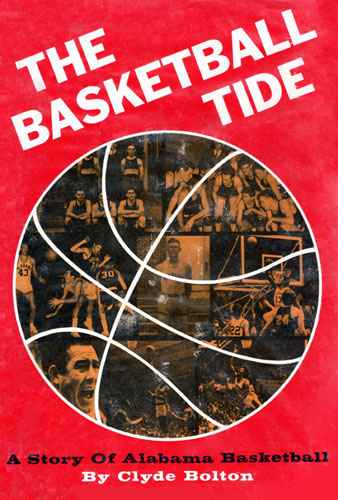 Respect still has been hard to come by. As of 2009 there were no less than 128 books in the Paul W. Bryant Museum about Crimson Tide football. There was just one on Alabama basketball, Clyde Bolton’s 1977 book The Basketball Tide.

Bolton was The Birmingham News’ longtime sportswriter and columnist. He covered Alabama athletics for forty years and the books he produced on the subject are required reading for anyone interested in the history of that period. The Basketball Tide certainly fits that description.

The early history of Alabama basketball was inescapably intertwined with the football program since the school’s coaches often worked both sports. That began at the start. DV Graves was hired to coach the football team in 1911 and two years later he was at the helm of Alabama’s first basketball squad.

That connection continued when Hank Crisp arrived in 1924. Although Crisp’s is primarily remembered as the man who brought Paul Bryant to Tuscaloosa to play football for the Crimson Tide, his 18 years at the helm of the Alabama basketball team built a durable foundation for the program.

As much the Crimson Tide dominated football in the Southeast Conference under the leadership of Paul W. Bryant, the perennial bugbear for Alabama basketball was Kentucky under Adolph F. Rupp. Reading The Basketball Tide you certainly learn that wins against the Wildcats were not common but when they occurred they were particularly sweet. 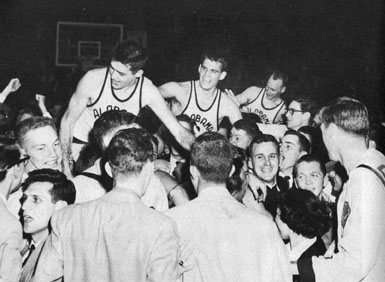 Alabama celebrated with the 1956 win over the Wildcats.

Perhaps the greatest victory against Rupp’s team came in 1956 under Alabama coach Johnny Dee stunned Kentucky in a wild 101-77 win in Birmingham. Dee had brought a slew of transfers from the Midwest with him when he arrived in Tuscaloosa and this game sealed their fame as the Rocket 8.

The Basketball Tide is an invaluable resource for anyone interested in Alabama basketball. While the style of the book can be tough reading – a lot of the chapters throw a heap of names at you and almost no context to grasp who they all are – Bolton’s prose tends to recover and carry the story along nicely.

The bigger problem with The Basketball Tide is that it ends during CM Newton’s successful stint leading the Tide basketball squad (they won three straight SEC titles just prior to The Basketball Tide’s publication). As a result there isn’t any information about the tenure of Wimp Sanderson who is, arguably, the most successful head coach in the history of Alabama basketball. Mark Gottfried is obviously omitted as well.

So with the current resurgence of the basketball program under Anthony Grant, perhaps the time has come for a sequel to The Basketball Tide.