Share All sharing options for: Tide arrives in Puerto Rico for "business trip"

The Crimson Tide basketball team arrived in San Juan, Puerto Rico, yesterday to prepare for the 2011 Puerto Rico Tip-Off tournament. The eight-team, twelve-game tournament will begin tomorrow, when all eight teams will square off throughout the day on various ESPN networks. Alabama will take on the Maryland Terrapins at 4:00 pm CST on ESPN2 to kick things off for the Tide.

The full tournament bracket is below. Note that the times listed are Puerto Rico time, which is two hours ahead of Alabama time. 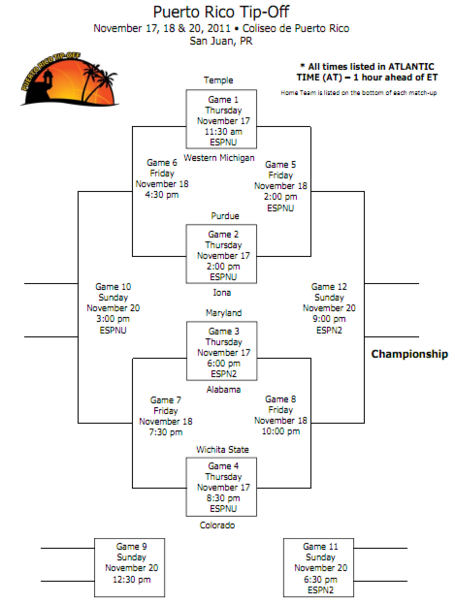 Obviously, the Maryland game late tomorrow afternoon will be big, as it will be the Tide's first game of the season against a major conference foe and its first of what will be, at minimum, a whopping sixteen nationally televised games during this year's regular season alone. However, it will be only one of three games in a short four-day span, with a game against one of Bama's two NIT Final Four opponents from last season--Colorado or Wichita State--on Friday night, and a final game against one of the other four tournament teams sometime on Sunday.

All three games will be big in setting the tone for non-conference play. Bama learned in the hardest way possible how a bad weekend in one of these tropical early-season tournaments can sink a season when last year's team allowed a close opening-round loss to Seton Hall spiral into an 0-3 Paradise Jam performance from which not even a 12-4 SEC record could save Bama four months later. It was a lesson not lost on the Tide's returning players, who have repeatedly called this a "business trip" to the island territory. Regardless of the result of the first game, the team must keep its focus and turn around immediately to perform at a high level in the quick turnaround with the following two games.

Two comfortable home wins against mid-major foes have not slowed down the hype around this team--from the Crimson faithful or from the national media (Dick Vitale fawned over the Tide during last night's Kansas-Kentucky telecast, while earlier ESPN Gameday analyst Hubert Davis listed Bama as a "Final Four contender"). Alabama's performance in the next few days will do a lot to either quiet that hype, or possibly justify it.