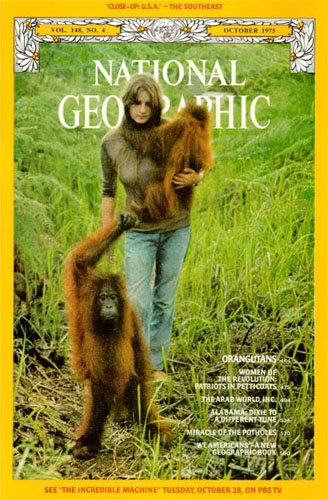 In the early 1970s, National Geographic photographer Dick Durrance III traveled to Alabama to capture the essence of the Yellowhammer State for a story penned by Howard La Fay. Their story "Alabama, Dixie to a Different Tune" appeared in the October 1975 issue of the magazine (Vol. 148, No. 4) and it offered a two-page spread on Crimson Tide football and Paul W. Bryant.

Durrance's photos are now available through National Geographic's online image collection. They are after the jump with an excerpt of that portion of La Fay's 1975 story. 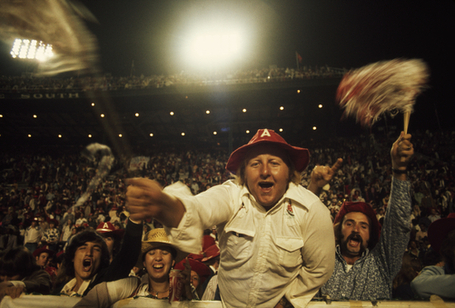 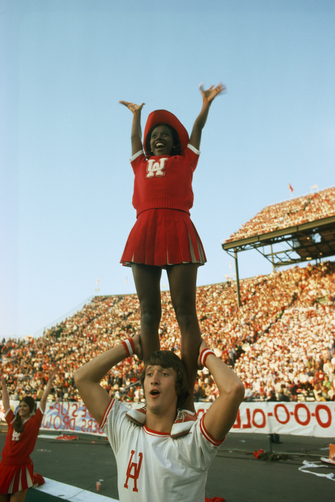 The 'Bear' growls, the crowd yowls, and 'Bama's Crimson Tide, under coach Paul (Bear) Bryant, rolls on to yet another season as one of the nation's top college football teams. Cheerleaders Brenda McCampbell and Chip Cornelius (left) wring mounting decibels out of a frenzied crowd as the battle rages into the evening. 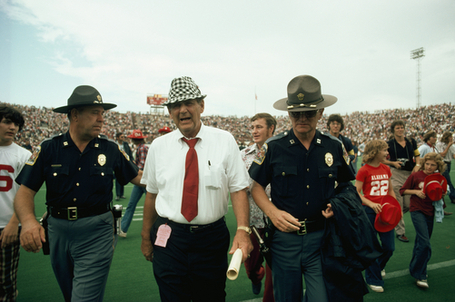 His two protective state troopers as much a trademark as his hat, the coach (right) leaves the scene of another 'Coup de Tide.' The master recruiter and motivator expects, and gets, hard work, dedication, and loyalty from his players. A successful businessman as well as a coach, Bear Bryant may be only the second best-known man in Alabama. It's debatable.

One important note about this photo feature. The cheerleader, Brenda McCampbell, was the first black on the Alabama squad. Recently, she spoke at a symposium on the integration of Alabama athletics about her experience.

Although she attended the school less than a decade after federal authorities forced a defiant George Wallace to allow blacks admission, McCampbell (now Brenda Lyons) said the atmosphere concerning race had completely changed.

"There were no doors closed to us unless we closed those doors ourselves," she said.