It's easy to worry about BCS Armageddon, folks, but 'Bama fans should remember this: We have the REC on our side. Whether it's paying off the refs, or bribing journalists to bury damning scandals, the REC always comes through in a pinch, so surely the ol' crimson mafia will take care of business with the Coaches' and Harris Poll voters, right? Well, that's what some delusional Auburn fans think anyway. In the meantime, some slightly less delusional Auburn fans get it, so enjoy the gallons of Iron Bowl tears below.

Even outside of the state of Alabama there was no shortage in meltdown material. With key rivalry games being played all over the country and bowl implications on the line everywhere, meltdowns flowed from the football heavens like rain during a monsoon. Clemson lived up to their reputation in Columbia, the worst Florida team of this generation put on the worst display of Gator football in decades, Ohio State finally fell at the hands of Michigan, Texas A&M choked one last time to the hated Longhorns, and Arkansas simply wilted in the second half like Houston Nutt took over in the locker rooms at halftime. The end result is the beautiful mixture of rage, shock, and heartbreak that we have all come to know and love. 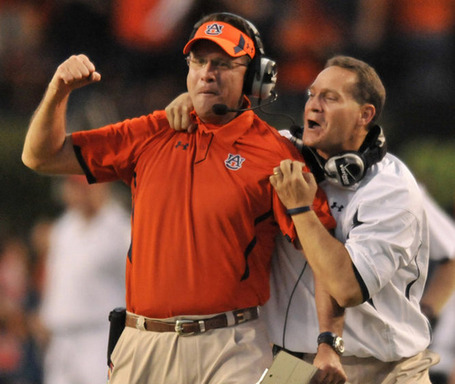 REC at it again. Zero holding calls on Bammer today. Just like every year

I guess SBB has been bought off. No other reason why he would have dropped the Tuscaloosa Mens Wear/Trent Richardson story.

Yep.. money talks..He picked up the story and blackmailed spuat.

Im surprized it took so long...on second thought, maybe negotiations do take that long. That story being squashed had to be worth a lot, what with Christmas coming and all.

This boner of a season peaked at just over 3 inches

he said he was going to throw the kitchen sink at UAT.  i saw maybe one fork that was thrown the rest was the same crap that was called all year and it didnt work against uat either

We were more prepared on 9/11 than on Saturday afternoon

moseley lies down faster than a crack whore being bribed.

If a tree falls in the woods, does Moseley run Ike a scared dog?

one of the best running backs that money can buy in college football...

did you see that QB fake?  Wow, Gus, that was so clever.  Do you need help packing your bags?

Smoke and mirrors don't work forever. Even kids who've watched Wizard of Oz understand this. Why doesn't this staff?

I'm beginning to think Kristi Mahlzahn is calling the offense, not Gus!!

Kristi ain't half as fucking goofy as her hubby

We brought a water pistol to the nuclear war

Thanks god this is over. Maybe my butt will stop hurting sometime before Christmas

I hate em worse now. We have made the cross state toothless idiots look like the Green Bay Packers.

Will someone tell Roof that Smelly is is an eligable receiver.

The alabama QB is going to win the Heisman award after this game.   He could have a glass egg in his pockets and it wouldn't get broken this entire game.

317th nail in Roof's coffin. Can we just bury the fucker already?

Are the refs giving Bama good spots? Rod is talking like they are attempting to give them the game.

I swear to God. I want all our defensive coaches fired right now. Why does auburn have the WORST 3rd DOWN PERCENTAGE IN THE COUNTRY? BECAUSE OUR COACHES ARE IDIOTS!!!!!!!! WHAT IN THE BLUE BLAZES OF F-ING HELL DO YOU THINK IS GOING TO HAPPEN IF YOUR MOTHERFUDGING SECONDARY PLAYS 10 MOTHERFUDGING YARDS OFF THE MOTHERFUDGING LINE ON THIRD AND 4????? FIRE THEM ALL!!!!!!!!!!!! NOW!!!!!!!!!!!!

Forget firin Roof. Torture him like he's tortured us.

Saban took it easy on us today, didn't want it to seem too obvious he's running it up to pander to the voters. He could have won by 100 today

I bet Roof is a card carrying member of the ACLU

Saban and SPUAT sold their soul to the devil. Let the REC have another tainted championship bought in suitcases filled with unmarked bills

Bammers national championships are about as clean as Chinese elections

Go on you whore, win another natty, you know you don't deserve it

How much are they bribing the pollsters? 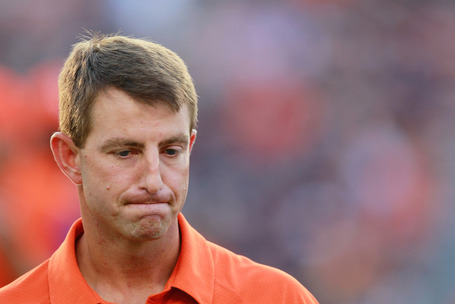 Good night! Fuck you Dabo and Fuck you Steele!

Can we ask Wake to go to the ACCCG in our place?

WHY THE FUCK cant our defense begin to grapse this concept.. we just get Sanduskyed on every play and come back for more

i said they'd look like the Patriots, didn't I?

Anyone want to play some Black Ops

Is fire dabo taken as a domain name?

i am so glad that i am graduating. i can't take being a student at this fucking joke of a university. tahj is a fucking joke. i burned my clemson shirt last week. now I've been proven right!

Welp…time to break out the rum my girlfriend’s sister brought me back from Cuba.

anybody want to invest in some WE SUCK shirts

Anyone interested in ACC Champ tickets or Humanitarian Bowl tickets? Something about blue fields makes this seem right.

[I]t is really noble of Kevin Steele to make so many dreams come true. He’s a one man Make-a-Wish Foundation for mediocre quarterbacks.

After every ass beating this team takes, i see players on facebook quoting bible verses. Are we running a football program or a bible college?? I’m a christian myself, though i might backslide with the cussing and the beer but HEY! I want some damn players who’ll smash people in the damn mouth! I don’t care if they’re freaking muslim! Give me some snake handlers!!!!!!!!!

Dabo is redneck for clusterfuck

This whole staff needs to go drown in the lake 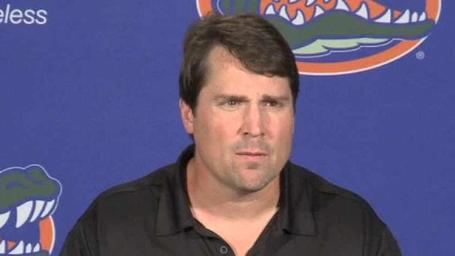 Was that pass into quintuple coverage?

Brilliant fucking pass. Just put one of the freshman in. Better yet, take a fucking knee every down and end this damn season.

Can we bench this jackass already? His brain is elsewhere tonight. Throwing into triple, quadruple, and quintuple coverage is like hitting for the ineptitude cycle.

Anything but Johnny B Derp

I’m cranking the Xbox up and killing some crap in Skyrim. I don’t need this.

I'd rather watch the Egg Bowl

is that Jacory Harris?

Nice Bostic. You been sharing a water bottle with Brantley and caught the stupid?

This may be the worst game I have ever seen in my life. This reminds me of the Texas State Armadillos on necessary roughness

Is this where Weis’ reptilian brain evolves to utilizing Joyer?

Pulling out the sword now...

Come now Jacoby, sit on Poppa Weis’ sideline cooler and tell me aaaaalll about it"

Can we just decline a bowl invite? this team doesn't deserve to play in the Papa Johns Bowl

I'm out. If anybody should need me, I’ll be the one over in the corner in the fetal position until next fall.

How many truckloads of Barnhill's buffets will it take to buy out fattie? 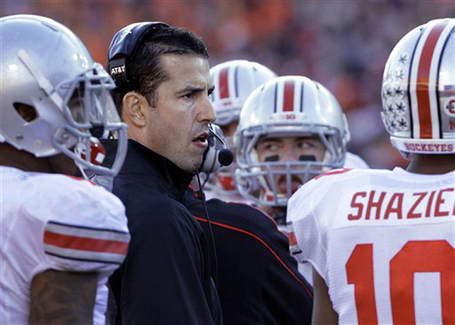 Took husky ten months to push our shit in

Fuckell took one last shit on the program

WE LOST TO MICHIGAN!!! MICHIGAN GODDAMNIT!

The fucking Titanic has sunk

Ain't no use shitting yourselves boys, Rich Rod ain't walking back through that door

Fuck every last one of you pieces of shit who says this is good for the rivalry. Fuck the rivalry, I want UM to burn!

Oh but Urban's gonna save us all! We'll be lucky if that flaky fucker last longer than my last used Impala

Urban Meyer interview question #1: Do you know how to delete e-mails?

Where's the Shithole Bowl this year?

I hope they send this fucking team bowling in Sibera

Fuck that, send this team to the moon so they can feel like less shit. Gravity and all

Which shitstain program is embarrassing us in mid-December? 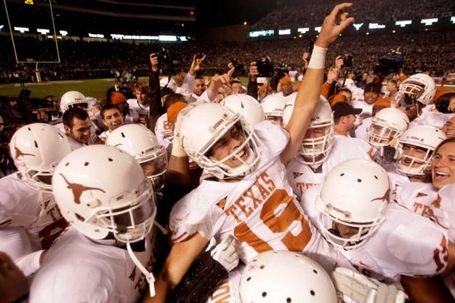 Meet the new Daddy, who's going to pimp slap us worse than the old Daddy

Army of Lions led by a Lamb, never thought Id say this but I miss RC! The SEC is gonna rip off our head and crap down our wind pipe.

Rolled over one last time for TU. Just hadd to let them shoot a final nut in us for tradition sake

We ate taint for Thanksgiving

My ass hurts just thinking about Bama and LSU

LSU piss bombs can't be this bad, can they?

Bet Taneyhill's woman has some Shlonghorn dick in her right now. Shitley's gunna fuck her all night long

Admit it: We went to the SEC because we knew we could never compete with tu. Tonight just showed we made the right choice

Sherman out to be burned in the bonfire.

This retread has a worse record than Houston fucking Nutt and there's not a chance he gets fired. We're worse than Ole Miss

We'll be no better than 12th in the SEC next year. We'll get by Kentucky and might squeak by Ole Miss. Everyone else will take out their pent up sexual desires on our asses

Expansion was a touch choice for the SEC my ass. They added millions of dollars to their bank accounts every year and a guaranteed win over A&M. They snookered us into the deal of the century 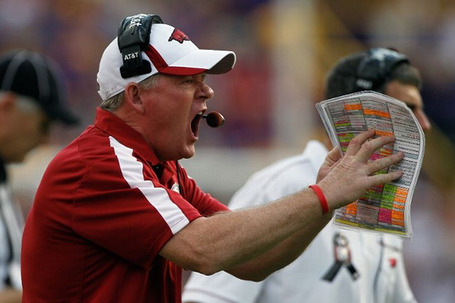 Glad Im sober.  A hangover on top of all this might be too much.

We're still Arkansas. Maybe we'll be more than that one day before I die.

LSU butchered us worse than NAFTA

That's right Bobby, get mad. Don't worry about getting a defense

Nice of LSU to invite us down for Thanksgiving leftovers. Wish they'd have told us we were the main course

Fact: Not a single one of these pussies would start on this LSU defense

There is no D in Bobby Petrino or Willy Robinson. Just sayin'

Second half was like Space Age versus Stone Age

Remember Fatass in Shawshank. That's us

All that was missing was Madre Hill blowing out his knee

frick all you negative cocksuckers in your vagina-shaped assholes.  We're 10-2 with our 2 losses to #1 teams on the road.  This, with our #1 tailback out all year.  frick you in your womanly genitals.

This is what will happen to Sandusky in about 10 months.

Oh, and frick YOU Les Miles.  "Just deciding when to take a knee".  frick.  You.  That porkulaknobber can choke on a rotten vagina and drown in a pool of Russellville Porta-Potty shit.

Obviously that kick to head you got from Jordan Jefferson didn't knock any sense into you.