Calculating the BCS Standings: What will it take for Oklahoma State to jump Alabama?

Share All sharing options for: Calculating the BCS Standings: What will it take for Oklahoma State to jump Alabama?

The most pressing question in recent days with respect to the potential BCS nailbiter between Alabama and Oklahoma State has been exactly what must the Cowboys do to earn a berth in the BCS National Championship Game. If Oklahoma can pull off the victory in Bedlam then clearly Alabama will be in New Orleans in the second week of January regardless, but if Oklahoma State emerges victorious it is equally clear that they will mount a legitimate challenge at Alabama for the number two position in the BCS standings. The question has simply been exactly what the Pokes would human polls in order to edge past the Tide.

The current BCS standings as released last Sunday night were exceedingly bullish for Alabama, with 'Bama having very strong leads over Oklahoma State in the human polls and surging past the Pokes to lead in the computer polls .9500 to .9300. However, it must be noted that those lofty numbers will be largely fleeting, and the underlying problem is that the current standings are little more than crimson Kool-Aid if Mike Gundy and company emerge victorious in Bedlam. With a win on Saturday night in Stillwater, Oklahoma State will probably overtake Stanford and Virginia Tech in the human polls, will take away at least some #2 votes in the human polls from Alabama, and will likely regain their previous lead over the Crimson Tide in the computer polls. Accordingly, while Alabama has a very comfortable lead at the moment, Oklahoma State could make a serious run at 'Bama with a win on Saturday night.

But, again, how much must Oklahoma State gain to actually overtake Alabama?

In the past two weeks it has been mentioned in various places that, assuming Oklahoma State passes Alabama and becomes #2 in all the computer polls, the Cowboys can overtake 'Bama by being voted no lower than #3 in any human poll ballot and then taking away approximately 25% of the #2 votes from Alabama. That line of reasoning has been repeated in many circles, and we here at RBR are guilty of repeating it as well, but it has never been otherwise verified and to my knowledge no one has actually expounded further upon the calculations.

So is this assertion accurate? If so, exactly how many human poll #2 votes must Oklahoma State poach away from Alabama to overtake the Tide? Or, looking at it another way, exactly how large is the current Alabama lead in the BCS standings in real terms, adjusting for Oklahoma State's inevitable ascension in the polls and in the computers with a win on Saturday night? In the past three days, Matt Dover and I have created several different statistical models with Excel spreadsheets in an attempt to answer all of these questions, and our findings are as follows below:

First off, we begin this analysis by making two key assumptions, and they are as follows:

(1) Oklahoma State regains their week thirteen lead over Alabama in the computer polls in its entirety, thereby leading the Tide in the computers .9500 to .9300 (Note: this is not a unanimous lead, which would be .9600 to .9200)

(2) Oklahoma State is voted no lower than third in any of the 59 Coaches Poll ballots or the 115 Harris Poll ballots.

With those two assumptions in place, we can begin work to do some work.

First and foremost, we need to determine exactly how large the current margin is between Alabama and Oklahoma State while taking into account the Cowboys' imminent rise in the human and computer polls with a win over Oklahoma. To that end, we take the score achieved by Alabama in the Coaches and Harris polls last weekend. From there, however, we give Oklahoma State the score in the Coaches and Harris polls that they would earn as a unanimous #3, and we also alter the computer rankings to reflect the Pokes wide lead in the Week 13 standings. The final numbers appear as below:

Taking those factors into account, Alabama currently maintains an effective lead of 0.0184 over Oklahoma State, and therefore that is the tipping point in this potential nailbiter. Oklahoma State produces net gains above that margin and they are headed to the Big Easy; if not, 'Bama gets the Rematch of the Century.

This sounds complicated in description but is actually quite simple in calculation. Such an analysis yields a fixed, constant number. The following are screencaps from those calculations, allowing you to see how much the overall BCS standings are altered by Oklahoma State flipping a single vote, and that number is expressed in the highlighted "Delta" columns: 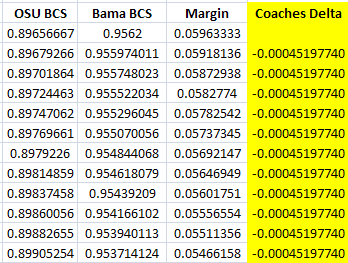 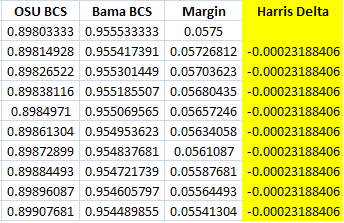 Let's go back to the widely-mentioned 25% theory and examine that further. The Coaches Poll is comprised of 59 voters and the Harris Poll 115 voters; accordingly 25% in each poll equates to 15 voters in the Coaches Poll and 29 voters in the Harris Poll. Running those numbers, does Oklahoma State overtake Alabama overall BCS standings? The answer is yes, but only if Oklahoma State overtakes Alabama in virtually every single computer poll. But what if only, say, Oklahoma State regains its previous Week 13 computer rankings which still left Alabama #2 in two computer polls? Suddenly, 25% of "vote poaches" would not be enough.

Even if Oklahoma State takes away 25% of the #2 votes from Alabama and finishes no lower than #3 in the remaining ballots, they are still behind Alabama in the BCS by a decent margin (0.006495701, to be precise). The exact origin of the 25% theory is unknown to me, and in all fairness it may have been a accurate analysis at some point in time, but clearly it is no longer valid. (Edit: only valid if Oklahoma State passes Alabama in every single computer poll) 25% makes for a decent charge, but if that is all the Pokes can muster 'Bama will be down on the Big Easy in the second week of January. (Edit: unless they indeed become a unanimous #2 in the computers)

So exactly what will it take for Oklahoma State to overtake Alabama if they merely regain their Week 13 computer lead? By knowing the current margin and the points gained per vote, we can again play with the numbers and come up with various "winning" solutions for Oklahoma State. On the absolute extremes -- massive surge in one poll while no movement whatsoever in the other -- the Pokes could overtake 'Bama by earning 41 #2 votes in the Coaches Poll, or on the opposite end of the spectrum 80 #2 votes in the Harris Poll. Other "winning" combinations obviously come somewhere in between those two extreme, hypothetical voting patterns, and in reality Oklahoma State would make gains in both polls -- likely one more so than the other, but nevertheless -- and the question would simply be if those gains were strong enough.

You can play with the numbers on your own and come up with various final BCS calculations based on the number of votes poached in each respective poll, but on the whole what emerges is that, given both polls would likely tend to be relatively similar, Oklahoma State will have to take away somewhere between 34-37% of the overall #2 votes from Alabama to overtake the Tide, and again that assumes that Oklahoma State finishes no lower than third on every ballot (i.e. they are voted above both Virginia Tech and Stanford in every single ballot). If Virginia Tech wins this weekend and together with Stanford they take away any meaningful amount of the third place votes, say 10%, then it becomes even harder for Oklahoma State, and at that point the Pokes will find themselves needing to take 45-48% of the remaining #2 votes (or higher) to overtake Alabama.

Is it a foregone conclusion that Alabama reaches New Orleans regardless of what happens this weekend in Stillwater? Certainly not, and to the contrary any win this weekend by Oklahoma State -- regardless of the final margin or the circumstances surrounding it -- will invariably result in a major surge by the Pokes in both the human polls and the computer polls. Alabama has lost at the ballot box before and it could do so again this weekend. Further, no one really knows exactly what kind of backlash an anti-rematch bias could generate in terms of raw votes. Nevertheless, as elaborated upon further in the above, Alabama has a stronger lead in the BCS right now than perhaps most realize, and while Oklahoma State could pull off the Hail Mary they have a great deal of ground to make up. Could this all go the other way come Sunday night? Certainly, but perhaps it is no random outlier that BCS Champion odds out of Vegas have Alabama and LSU at even money with Oklahoma State lagging well behind.