Was the announcement self-inflated and dramatically over the top? Definitely. Was it the most needlessly prolonged announcement since Malcolm Mitchell decided to Occupy the Valdosta hibachi house twelve months ago? Possibly. Nevertheless, JUCO cornerback Travell Dixon has committed to Alabama. Per, um, himself, on Twitter: 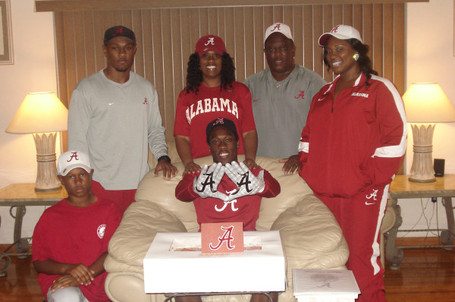 Editor's Note: For the record I'm aware of the possibility that sociaI media could be used as a platform for virtual hat tricks of epic proportions, but considering that Dixon's family has (1) apparently plopped down about $250 on 'Bama swag, and (2) seemingly ordered a 'Bama cake, I'm going to blindly assume against that possibility. (As another aside, Dixon announced on Twitter and Facebook, and is following the announcement with a question-and-answer session on Ustream, so give the kid credit for being tech savvy.)

Dixon is a 6'2 and 200 pound junior college cornerback who comes highly regarded and heavily recruited by several major programs. In the end Dixon picked 'Bama over Florida State, but he practically had his pick of just about every school in the country. Originally from Miami, Florida, Dixon has spent the past two years starring at Eastern Arizona Junior College, and many consider him to be the top junior college corner prospect in the country. With his academics in order, he will enroll early in Tuscacaloosa in the coming weeks, allowing him to participate in both the winter strength and conditioning program and spring practice.

With three of Alabama's top four corners not expected to return for 2012, 'Bama faces something of a short-term hole at the cornerback position, and to that end Nick Saban and company have heavily recruited no less than three junior college cornerbacks this season. With the matriculation of Deion Belue suddenly being in great doubt, Dixon becomes a far more critical commodity. There is some young talent at corner and more on the way -- Bradley Sylve, Jabriel Washington, Geno Smith, etc. -- but clearly the staff wants more overall depth and experience in the rotation.

Playing time will not be freely given, of course, but for obvious reasons the expectation in signing a mid-year junior college prospect like Dixon is that they will come in and play meaningful snaps immediately. With the ideal size and speed 'Bama prefers in a corner and an additional six months to acclimate himself to the Division 1-A game and the Nick Saban defense, Dixon figures to have a major role next season in the Alabama secondary.

Dixon becomes the 23rd commitment of the 2012 recruiting class.