The Coaches Poll is out:

Holy shit, boys, does this mean we're in? A unanimous #3 would have gotten 1357 points, so in effect Oklahoma State only poached 10 #2 votes away from Alabama in the Coaches Poll, and by all accounts they likely needed to do far more than that.

Now, the math. With 'Bama holding onto the number two spot in the Peter Wolfe Ratings and Sagarin Ratings, Oklahoma State cannot be the unanimous number two in the computers, and thus their absolute ceiling in the computers is a .9500 to .9300 edge over Alabama. If we run the numbers based on that computer score, enter in the respective scores in the Coaches Poll, we can figure out how many votes that Oklahoma State must take away from 'Bama in the Harris Poll to go to New Orleans to face LSU.

Is it possible? Certainly, and the Harris Poll is the one that will inherently be the most volatile, but for the time being the numbers look damn good in Tuscaloosa. This is going as well thus far as we could have reasonably expected. Hope for the best.

Addendum I: The key here is going to be the Peter Wolfe Ratings. Andy Staples previously reported 'Bama was number two there, though I do not believe that has been independently confirmed anywhere else. If that is true, 'Bama is in damn good shape, all of the above applies, and Oklahoma State is not doing enough to overtake us in the final BCS standings. However, if somehow OSU jumps us in the Peter Wolfe Ratings, they become the unanimous #2 in the computers and they are likely going to overtake us. It's all going to come down to the Wolfe Ratings.

Addendum II: The AP Poll has been released as well, and its results are as follows, per ESPN: 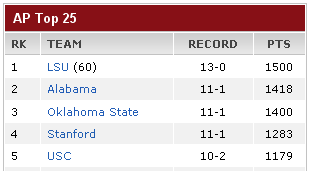 Now, remember that the AP Poll does not in any way impact the BCS projections, so in that sense it is totally meaningless. Even so, though, this does give us some insight into the groupthink. Coming into this past weekend the AP Poll was the most pro-Oklahoma State poll around, as they had the Pokes #3. Even so, despite OSU making up a lot of ground, they still did not overtake Alabama this week, and they will need to do better than this in the Harris Poll, it seems, to overtake 'Bama in the final BCS standings.

Editor's Note: This thread will be updated as additional information comes out, so make certain you refresh the page accordingly.