Share All sharing options for: It's Meltdown Time, Alabama Edition...

Remember that old video where the kids get the Nintento 64 for Christmas and then they go absolutely nuts in excitement? Well, Saturday night in Tuscaloosa was the equivalent of if those kids had opened that box to find out it had been stuffed full of educational books and flannel socks.

Alabama fans came into the weekend hoping for an Oklahoma win in Bedlam to clinch a spot in the BCS National Championship Game, and, failing that, a Virginia Tech win the ACC Championship Game to make it more difficult for the Pokes to rise up the ranks. Instead, Chokelahoma and the Chokies lived up to their name, Big Game Bob Stoops had arguably the finest performance of his career, and in Tuscaloosa all hell broke loose. This one ultimately had a happy ending, of course, but good luck convincing any Alabama fan of that on Saturday night.

Even outside of Alabama, meltdown time was epic on Championship Saturday, so much so that for this week only this piece will be broken up into two sections. Today we'll focus on the Alabama meltdown on Saturday night, and tomorrow we'll take a broader view around the rest of the country. 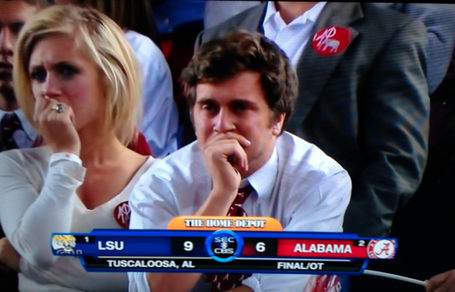 That fucking plane crash didn't mean shit to that football game. Fuck you Holly, you slut

These helmets look like props from the Wonder Years show

the left front wheel on the bus is looking real loose

This is off to a flaming bag of dicks

It's what happens when other teams run the train on them

Well T Boone Pickens can suck a bag of dicks

Then I'm jumping off the fucking Brooklyn Bridge

Star Jackson could do better

and no fluffer in site

Pissing all over Box's memory

Fuck you Landry Jones you piece of shit

Got room up on that bridge for 2?

Give this whole goddamn state back to the Indians

Sooners are tossing some Poke salad to troll us

The anti-rematch twits are coming out of the woodwork. Quick, where’s the pesticide!

Stoops. That pouty-lipped tubby fuck. We gifted that cocksucker 2 victories in the early 2000s for THIS?

Bout to crank up my chainsaw

If I were President I swear to God I’d do fuckin’ nuclear testing on this shithole.

How much are Sugar Bowl tickets going for?

Same as the GofuckyourselfStoops.com Bowl

The ’Pokes are stump training OU… I swear somebody playing a banjo.

Field goal for OU. What fuckin’ deity do I have to blow for three measly goddamn points?

I wouldn’t want that fuck-knob as an equipment manager!

This is like living in the goddamn Old Testament

You pouty lipped Okie. I’m gonna have your fucking kneecaps on display at the Smithsonian if we get fucked out of the BCSNCG.

There IS an anti-rematch crowd that probably has Karl Fucking Rove as it’s chief lobbyist!

And when the computadoras go ape-shit-gaga over OSU like they are Mars of Gods of War?

You fuckers are being far too rational here, when most Harris Poll voters will drown in the creamsicle Kool-Aid.

OU is officially the pivot man in this circle JERK!

But they were on the road in bumfuck Iowa to fired up college kids rooting for their schools biggest upset ever.

And in case you forgot in the last 10 minutes, their goddamn plane crashed too!

I'd motorboat Holly Rowe to get Alabama to 2012 BCSNCG in Nola.

I'd hit it pink and all

My 12 month old son is better than Landry fucking Jones

See you in the Canadian Football League, you fuckin' tosser!

Way to go all bama bangs qb there

we will not play for the BCS NC BECAUSE WE DIDN’T RECRUIT A MOTHER FUCKING KICKER THAT CAN MAKE A FIELD GOAL FROM MORE THAN 40 YARDS.

Cade fucking Foster, this is all because of you. All this stress, all this heartbreak…

This game is no officially a crime scene

I'm officially on the conspiracy bandwagon

A brilliant football writer was found dead in the Hudson River. On him was found a sign that simply read, "Bob Stoops is a pants shitter!"

My worst nightmare was having nut cancer. It's now a distance #2.

Well the jumping Bama train has left the station

OU left a peanut-laden turd in the punchbowl.

Fuck whatever happens to us. I will bury that hell in a special part of my soul, but fuck ou and anyone who wants to bolster yo sad asses. Y’all bitches are useless

Can we strip Dabo of his degree?

anyone know how much money landry Jones’ agent Cecil Newton got him to take a giant crap on this game? $180,001?

I'm fucking turning this late-term abortion off. Going to go home, maybe watch some Fringe or play some Wow. Looks like we might be playing in the Sugar Bowl. Can’t pull for LSU or these fudge packing cowboys… guess I’ll pull for Al Qaeda.

Well I guess we won't have our postgame BCS celebration thread tonight!

LANDRY JONES WITH THE FUCKING FLOP! Grow a pair you pussy…damn I know you play in the vagina confernece and all but stay on your feet….

Just fuck me with a big green slimy donkey dick

HOLY SHIT THIS GODFORSAKEN PILE OF SHIT IN OKLAHOMA. THE WHOLE STATE OF OKLAHOMS IS WORTHLESS

I will not fucking calm down

Fuck the Sugar Bowl. Every turn of fate tonight makes me hate that unimaginative bitch McElwain more than ever. He probably would have fucked up the NCG if given half the chance anyway. 1966, 1977, 2011, etc, etc…Fuck this season and every cent & second I spent on it.

oklahoma getting sanduskied tonight... what a shame

Landry Jones fumbles a pass on the first play of the second half. How much did tboone pay him in the tunnel outside the locker at half??

Even Auburn and Tennessee hasn't played this goddamn bad

Stoops taking the cowboy cock like Heath Ledger in Brokeback

we walked right into a chainsaw

THIS IS WHAT IT FEELS LIKE TO BE EYEFUCKED! Swallow 10,000 bags of flaming dicks stoops

If we don't get in the national title and Trent loses the Heisman I'm moving to Canada.

Landry Jones is a bought-and-paid-for faggot

LSU would hand it to them harder than sandusky in a shower.

Now I understand why that Box kid took all those meds

how am I supposed to sleep tonight? I’m taking a xanax

I blame Austin Box. You heard me.

Gundy sounds like a retard. He’s got as much chance at getting 39 on LSU as he does waking up with a 12 inch dick.

Asking Boob Stoops to win a big game is like asking me to fuck you gently with a chainsaw.

Gundy Can Eat A Dick. All these mother effers on ESPN and stuff are tweeting that OSU is the undoubted contender…and it pisses me off that people are using the excuse of "we lost cause we had a coach die" crap. No disrespect meant, but how is that a valid excuse to lose to a shitwad of a team in iowa state? fuck the ignorant minds of people everywhere…fuck em fuck em