The Steamroller Elephant Is Dead

Share All sharing options for: The Steamroller Elephant Is Dead 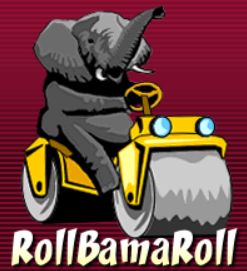 Sometime in the next few hours the steamroller logo will be no more.  After several false starts and just general flakiness, we've got a new logo now and we think it's a immeasurable upgrade from the aforementioned abomination.  Todd, Nico, and myself all agreed that it was a good, clean look, something with a bit of a retro flair but with an aggressive style, and also something that will hopefully look good on RBR swag in the coming weeks and months.

Credit for the new logo, as well as a big tip of the hat and many thanks, goes out to Michael Lennicx, a native Alabamian artist living in Manhattan, for creating the design and for making the alterations that we requested. Of his own volition he contacted us with some design ideas, and pretty much handled the entire process as we moved forward, making it easy for the authors of the blog to focus our efforts on creating substantive content on a daily basis instead of worrying with collateral design issues. He does good work and, as a token of our thanks, check out his portfolios at michaellennicx.com. We are more than pleased with everything he has done, and we think you'll probably be impressed by some of his other work as well.

Now, obviously we are aware that we had a contest last year where the RBR readers overwhelmingly selected a different logo, but unfortunately that did not come to fruition. We tried our best to finalize and implement that logo, but unfortunately due to elements beyond our control we were unable to do so. Our apologies are in order for that not working out as we had originally planned, but nevertheless we ended up with a logo that we think is a great look and one that we think you all will enjoy.

Having said all that, a final goodbye is in order to the steamroller elephant. You were as ugly as the day is long, but you oversaw a national title and the resurgence of our beloved Tide, so our grudging thanks as we send you off into the sunset.