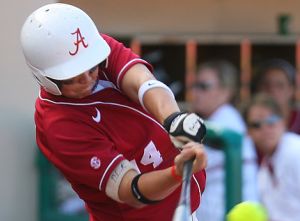 To say the Tide's weekend trip to Baton Rouge went about as poorly as could be expected would be a massive understatement.  Alabama entered the series riding a seven game win streak and as the #1 ranked team in the country in both major polls, and left Louisiana with it's first series loss of the season, getting swept for the first time since 2004 (also at the hands of LSU), and dropping to #3 in the polls.  It was also the first time in school history that the Tide has scored one or less runs in four straight games (Alabama topped South Carolina 1-0 last weekend).  Tiger pitcher Brittany Mack earned SEC Pitcher of the Week honors for her performance:

Mack was a key component of LSU’s sweep of top-ranked Alabama.  She went 2-0 with a stout 0.32 ERA and garnered 25 strikeouts in her 22 frames of action. The Round Rock, Texas, native earned two of the three wins in the circle over the Tide highlighted by a two-hit shutout with nine Ks during the series finale. At one point, Mack retired 14 consecutive batters and it marked only the second time on the season that the high-octane Alabama offense failed to score. During the series opener, Mack gutted out all 14 innings and racked up a career-high 14 strikeouts on an astounding 234 pitches. She stranded 16 Alabama base runners, 10 in scoring position.

Further, first baseman Anissa Young earned both SEC Player of the Week and National Player of the Week honors after blasting a solo shot homer to secure the win on Friday, and encoring with a two run shot to seal the deal Saturday night. Their performance took LSU from being unranked to #19 in the polls.  Hats off to the Tigers, and the quicker we move on the better.  Speaking of...

The Tide bounced back with a 5-2 win over Troy last night in front of a record crowd of 1,351 fans at the Troy Softball Complex.

Jackie Traina struck out eight and allowed two runs on four hits in six innings to earn the victory. Traina bounced back after allowing two runs in the first to retire 16 in a row before yielding to Kelsi Dunne. Dunne earned her 2nd save of the season on the strength of four strikeouts in one inning.

Alabama opened the scoring in the first by putting three runs on the board. Whitney Larsen got things going with a lined shot to right field that was caught but Braud was able to score all the way from second on the sac-fly. Cassie Reilly-Boccia then belted her ninth home run of the season when she took a two-out pitch over the wall.

After Troy scored two runs in the bottom of the first, Alabama was able to get one back as it increased its lead to 4-2. Fenton was able to wreck havoc on the bases as she reached on a bunt single and then promptly stole second and third in the third inning. She was able to score when the throw sailed into left field on her stolen base attempt at third. The Tide added an insurance run in the sixth inning when Jazlyn Lunceford singled up the middle to plate  Kaila Hunt from second. Hunt started the inning by drawing a walk and moved over to second on a Locke single.

Alabama returns to Tuscaloosa this weekend after a two-week road trip to face Mississippi State in a three-game series. The two teams will open the weekend on Friday, with first pitch slated for 6:30 p.m.  If you're in town for A Day consider stopping by.  Rumors have swirling on the Twitter that Greg McElroy (or Trent Richardson, which doesn't make much sense) will be throwing out the first pitch, so if anyone can confirm that comment away.