Share All sharing options for: RBR Reading Room: The Legend of Bear Bryant 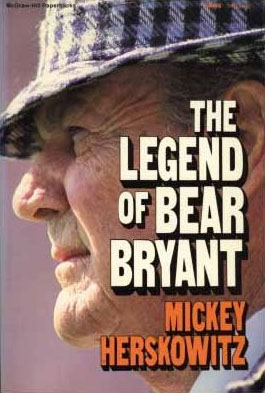 In 1954, The Houston Post assigned a young reporter named Mickey Herskowitz to cover the Texas A&M football team. When the Aggies new football coach, Paul W. Bryant, packed his new charges into a pair of buses that fall and headed out to a West Texas town of Junction the cub reporter was in tow.

That episode began a long and complex relationship between the two men that the writer eventually chronicled in the 1987 book, The Legend of Bear Bryant. It is among the ranks of handful of tomes that are truly required reading for those interested in learning the history of the Alabama Crimson Tide’s greatest coach.

The Legend of Bear Bryant is a collection of sharp insights, well-crafted tales and compelling apocrypha served up with just the right amount of skepticism. Its truths are powerful not just because of their accuracy, but also because they are so well-put. "To Bryant," Herskowitz says. "Football was only a little more precious than air."

Herskowitz deftly handles the obvious admiration he has for his subject with a duty to be honest to his readers. The key to his success is that he seems less interested in beating you over the head with the point than making it to underscore the story he’s trying to tell. The results are observations that are not particularly revolutionary but are rarely better put. For example:

"He was a borrower and a refiner, not an innovator, a master at taking someone else’s ideas and making them better," Herskowitz observes. "Bryant was willing and quick to seek help and he repaid it many times over."

Of course The Legend of Bear Bryant delivers on the celebrated stories and tales you expect in any account of the man’s life. More than a few recounted here seem a bit shopworn but it’s worth remembering that Herskowitz’s account is the source for many of these stories. The fact so many later writers cleaved so close to his reporting is a testament to his stature as Coach Bryant’s preeminent biographer.

Herskowitz, who has penned a few biographies of larger-than-life characters, knows what he’s doing here so it’s not a surprise The Legend of Bear Bryant is a well-crafted effort. While the writer is honest about his admiration for Coach Bryant he is also up front about the bias that brings to his reporting. ("I was not naïve about the fact we used each other," he admits. "And together we turned out reams of good copy.") Yet, somehow, he never lets himself completely abandon his objectivity. Even when he’s being completely uncritical about his subject, there’s that instinctive sense of distance.

While the book is certainly Coach Bryant’s story, describing it as a biography seems somewhat inaccurate. The tale is told very clearly from Herskowitz’ point of view, almost as if he is using his long association with Coach Bryant to tell his story. It’s an inspired approach that works to not only keep the reader enthralled but, somehow, also gives the work an authority which other books simply cannot match. 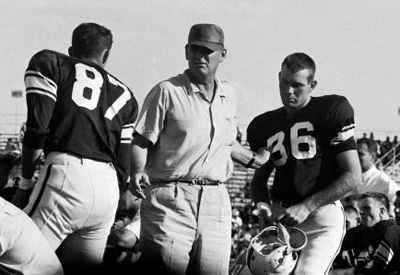 Part of that could be his position as an outsider. As a Texan covering Coach Bryant during the A&M years, Herskowitz was never completely immersed in degree of devotion those from Alabama gave to the man. He possesses a balance in his admiration of the coach that unwavering devotion cannot easily allow.

More than any other biographer, Herskowitz gets at the man within the mythology. He offers up some of the best known anecdotes with reasonable caveats where necessary and doesn’t shy away from addressing taboo topics. The result is a book that seems more honest than any other in its attempt to grapple with the life of a man whose contradictions were only outshone by his raw magnetism.

"At bottom, he was the most human of coaches. The poses, the calculation, could be interesting," Herskowitz writes. "But just when you thought you had him pegged, he would disarm you with his honesty or vanity."

The revised edition of the book, printed in 1992, Herskowitz notes that the original title of the book was The Legacy of Bear Bryant but that a printing error had switched it to "Legend." Although the author’s argument that the latter term might suffer from overuse, I would disagree that it is trite.

Because in 1987 it was still far too soon to make any reasonable assessment of Coach Bryant’s legacy and, even today, that task might be a might ambitious. Yet the man was the very essence of "larger than life" and by wrestling honestly with that to create his book Herskowitz came closest to describing the man and thereby created a definitive take on the legend.